On any given night, one can descend the flight of creaky steps that lead down to the dark basement club of the Village Vanguard, whose green felt walls and other decorative trappings have remained unchanged for decades, and feel at once deeply connected to the city and completely removed from it.

It has been called the “Camelot of jazz rooms,” the “Carnegie Hall of Cool” and the “prototypical Village bohemian club,” but regardless of analogies, the Vanguard is simply one of those hallowed New York institutions—like the Grand Central Oyster Bar or, for that matter, Grand Central itself—that seems to have always existed.

This Sunday, the Vanguard, which is the oldest jazz club in the city, turns 80. To celebrate that occasion, the pianist Jason Moran is presenting a weeklong string of concerts, running March 10-15, that attest to the club’s rich history. There will be solo piano performances, poetry readings, comedy and an evening devoted to the music of Thelonious Monk, among other things.

“There’s no other place on the planet where so many greats played for so many years, and that’s one of those statements that seems like hyperbole, but it’s not,” said Loren Schoenberg, the artistic director of the National Jazz Museum in Harlem. “It’s really the only quote unquote holy place left in jazz—period.”

The Vanguard, the Zelig of New York nightclubs, has borne witness to some of the greatest performers in the history of American entertainment. Opened in 1935 by Max Gordon, a Lithuanian immigrant and impresario, it originally operated in the tradition of a Viennese cabaret and poetry house, featuring the likes of Maxwell Bodenheim and Joe Gould, described by Vanity Fair as “notorious bohemian poet-alcoholics.”

As it developed into a sort of petri dish of experimentation, the Vanguard showcased a motley assortment of folk and blues artists like Lead Belly, Woody Guthrie and Richard Dyer-Bennett, presaging the ethos of Cafe Wha? and the Bitter End by a generation. It also had comedians such as Irwin Corey, Lenny Bruce and Woody Allen and jump-started the careers of Judy Holliday and Harry Belafonte, among many others. (“I still don’t like his unveiled navel,” the curmudgeonly Gordon wrote of Mr. Belafonte in his 1982 memoir, Live at the Village Vanguard, though he did approve of his voice.)

In 1957, the club changed its roster to a (mostly) jazz lineup, featuring John Coltrane, Miles Davis, Charles Mingus, Cecil Taylor and Bill Evans, though there were some outlier events. Dick Alpert (a.k.a. Ram Daas) hosted a psychedelic sit-in in 1965 in which many patrons snuck in their own LSD, much to Gordon’s chagrin.

“It was sort of home, and we all got pretty familiar,” said the tenor saxophonist Sonny Rollins, who recorded the first full-length, live album in the club. “There used to be a guy there named Elton—I remember him, he made the greatest hamburgers in the world.”

Though the club no longer serves food and the kitchen has been converted into an office, not much has changed about the Vanguard, its distinct red awning jutting out into the sidewalk like a beacon of stability in a neighborhood that often feels like a palimpsest of itself.

The Vanguard has remained pretty much uncorrupted by commerce and never seems to pander to its clientele, perhaps because it exists outside the ebb and flow of Village life, sitting as it does on an avenue. (Though the lines of Japanese and German tourists can get overwhelming.)

“One thing that’s great is that, through all the years, they’ve had the wisdom not to mess with it,” said the pianist Fred Hersch. “I like the Vanguard for its purity.”

Mr. Hersch has been playing at the club since the late ’70s and will perform solo in the March celebration. Other performers will include the poets Elizabeth Alexander and Yusef Komunyakaa; the comedians Marina Franklin and Keith Robinson; and the Charles Lloyd Quartet, in a rare club appearance, featuring Mr. Moran, Reuben Rogers and Eric Harland.

Those who have never been can look forward not only to its authentic feel but also its distinct, wedge-shaped room—and its acoustics, which musicians and listeners in the know say can’t be beat. The clarinetist Anat Cohen, who has recorded a live album there, described the room’s sound as “eternal.”

“You have a week to get used to the sound, and every day it builds on what you did the first day, which really helps to develop a song,” Ms. Cohen said. “The songs take the shape of the room, and the sound of the instruments—it’s so natural, it makes the music just grow. You can let the music become what it wants to be.”

When Max Gordon died in 1989, his wife, the eagle-eyed Lorraine Gordon, who is now 92, took over. She runs the club with her daughter, Deborah, and the longtime manager, Jed Eisenman, and can be found on any given night holding court in the back of the room.

The lineup is generally a reflection of Ms. Gordon’s tastes, and they are wide, featuring staples like Barry Harris, Bill Charlap and Kenny Barron as well as more adventurous performers like John Zorn, Craig Taborn and the trio the Bad Plus, which got its first record deal as the result of a Vanguard performance—a rite of passage for New York jazz musicians.

Despite its importance in the cultural terrain of the Village and the city at large, the Vanguard, which first opened on Charles Street in 1934 but moved to Seventh Avenue the next year, where it still sits, remains un-landmarked. Ms. Gordon has attempted to landmark the interior, to no avail, according to her daughter—which means one thing: Get there while you still can.

“It’s the most magical jazz room in the world,” said Gary Giddins, who began frequenting the Vanguard in 1964, with a fake ID, and documented countless shows there as the longtime jazz critic for The Village Voice. “It’s basically a concert hall with bourbon, and what could be better than that?” 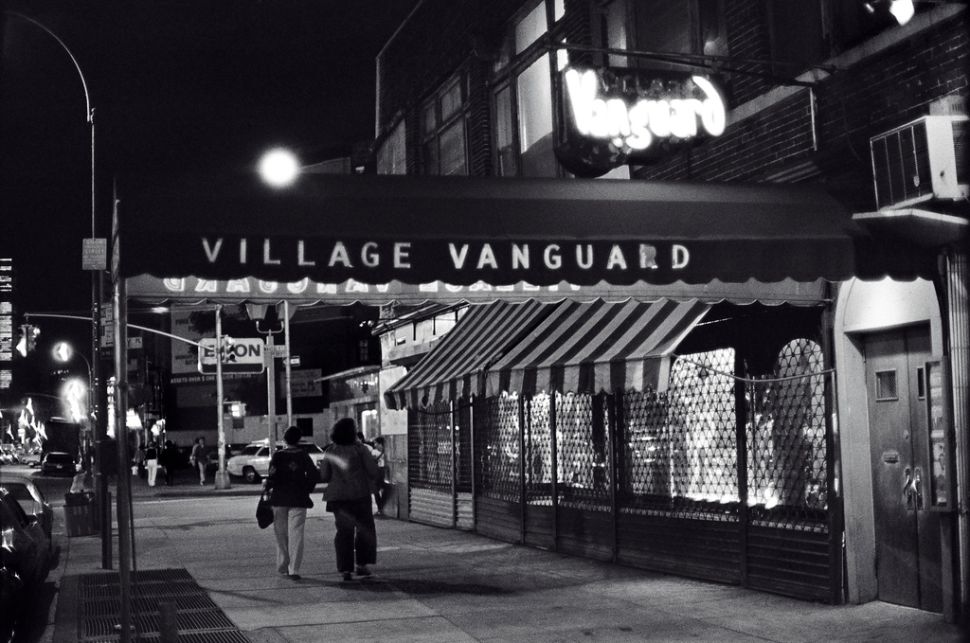