Clifford Odets was one of the theater’s leading voices of left-wing political socialism in the years between the Depression and World War II and a card-carrying Communist who was called before the infamous House of Un-American Activities Committee in 1952, when he named his friend Elia Kazan, an action that tortured him until he died prematurely in 1963 at age 57. (Kazan also named him.) Today he is greatly admired for his moralistic dramas (he was no good at comedy) about the desperate challenge to overcome economic oppression and break out of the political and social shackles of the time to make something of yourself, to stand up and be counted. Rocket to the Moon, an early work from 1938, is not a good example of Odets at the top of his game.

A lot of his plays have been revived—most recently, Golden Boy and Awake and Sing!, in a memorable Broadway reincarnation directed by Bartlett Sher that starred Ben Gazzarra. It’s easy to see why this one has been ignored. It reads and plays like the amateurish effort of a novice, experimenting with rhythmic patterns of speech that do not sound like real people talking, and in its first New York revival by the Peccadillo Theater Company at the Theatre at St. Clements on West 46th Street, the dusty odor of a mortuary fills the air. In fact, Rocket to the Moon was Odets’ eighth produced play, written a year after the success of Golden Boy. The dialogue is suffocated by a lot of pseudo-poetic metaphors that choke the life out of its characters. “I work like an anti-toxin before the repercussions!” “I know the difference between love and poundcake!” “Marriage is the only adventure left for the cowards!” The play is about dentists. I doubt if the average working-class dentist talked like that, even in 1938.

The setting is a dreary waiting room in an office shared by two dentists—Dr. Ben Stark (Ned Eisenberg), whose life is organized and dominated by his tough, pragmatic wife Belle (an especially convincing Marilyn Matarrese), and Dr. Phil Cooper (Larry Bull), who owes three months’ back rent and has a hard time making ends meet. Other characters who enter the desultory action (or lack of it, despite stoic direction by Dan Wackerman) are Cleo (Katie McClellan), the flighty, scheming office secretary who sleeps with everybody in an unyielding attempt to carve some love for herself out of life’s adversity; a show business dancer from another world (Lou Liberatore) who also has an office in the same building and wanders in occasionally to flirt with Cleo; and a cynical manicurist down the hall (Michal Keyloun) who dispenses sarcastic one-liners at the cooler.

Ben’s father-in-law, referred to formally as “Mr. Prince” and well acted by veteran Jonathan Hadary, encourages him to commit adultery with Cleo to get even with his daughter, Belle, who hates him for the way he treated her mother before she died. Mr. Prince is the symbol of liberation in the Odets world. “Live a little! Take a chance! Take a rocket to the moon! Explode!” is his watchcry, although he makes no secret of the fact that he wants to marry Cleo himself. Everyone gives in to fits of hysterical self-indulgence in over-written outbursts that do not ring true in the solemnity of the Stanislavskian surroundings designed by Harry Feiner. The big dramatic highlight comes when Dr. Cooper breaks down and sobbingly admits he’s become a blood donor for $30 a pint. You don’t know whether to stifle a tear or laugh out loud.

A lot of old plays are worth reviving, just to give modern theatergoers a glimpse of the past. Rocket to the Moon is not one of them. It’s like an old chair with a broken leg—it’s tired and seen better days, but you don’t want to throw it away as long as you can still sit in it. Odets gave up the stage and lived out the rest of his life in Hollywood. When he died, he was serving as script doctor on TV’s Richard Boone Show. The obits accused him of selling out, giving up and failing to live up to his potential, but don’t forget Clash By Night, which explored tedium and adultery much more dramatically than Rocket to the Moon. His final two plays (The Country Girl and The Flowering Peach, about Noah and the Ark) were, in my opinion, vastly overrated bores, but redemption triumphed with his tight, lacerating 1957 screenplay for Sweet Smell of Success, a great film about yellow journalism, the illusion of fame and how New York’s power-hungry will stop at nothing to achieve it.

You can see where the writing was going in 1938. In the talky, creaky and dated Rocket to the Moon, a character says, “No man can take a bite out of me and throw it away.” Twenty years later, in the electrifying movie Sweet Smell of Success, gossip columnist Burt Lancaster says to duplicitous press agent Tony Curtis, “I’d hate to take a bite out of you—you’re a cookie laced with arsenic.” Hard to believe both lines were written by the same man.

Comedy comes in all sizes, and none of them finds a perfect fit in Lives of the Saints, a sampler of six one-act plays by critical darling David Ives, who wrote Venus in Fur. The cast of seven versatile, rubber-faced actors deserves a medal for rising above and beyond the call of duty. Their vocal mannerisms and body language fill in the blanks when Mr. Ives’ words fail them. It’s not a total loss, but frequently tiresome.

In The Goodness of Your Heart, the first and best play of the sextet, two neighbors drinking beer in the backyard on a balmy night are having a relaxed time until one guy suggests the other one buy him a new TV set with all of the updated technology. Why? “Cause you like me,” is the reply. “Out of the goodness of your heart.” Shamed by guilt, confusion and annoyance, the nice guy presents the gift to his neighbor, who grouses that he forgot to gift-wrap it. The nice guy seems pissed off because the neighbor forgot to say thank you. “You mean you gave me a television just so I would express my gratitude?” The theme is the logic of illogic. It made me laugh.

The rest of the menu, at best, made me chuckle. Occasionally. In Soap Opera a man falls in love with a washing machine, prompting an entire play composed of laundry references. Detergents, rinse cycles, spin-dry metaphors … you get the picture. Enigma Variations is about a woman who sees everything double. When two of her in the same polka dot dress go to a shrink, there are two of him. She has a twin sister in the twin cities. Seeking an eye doctor for advice, there are two of him, two eye charts and lines that repeat words in a dizzying jumble—“Fifi, Bebe, Bebe, Fifi—will you send me a Bill, Bill?” It’s a takeoff on Abbott and Costello’s old “Who’s on first?” routine. In Life Signs, a wimpy man loses his mother, but from her morbid deathbed, she launches into an X-rated tirade about everything sexual she has suppressed her entire life and the son, his wife and the doctor with the death certificate can’t shut her up. And on and on.

As wonky as Mr. Ives’ ideas sometimes are, I found them only intermittently amusing. The excellent ensemble players and the unflagging direction by gifted John Rando guarantee that the evening is not a total loss. I only wish Lives of the Saints was half as fresh and funny as it thinks it is. 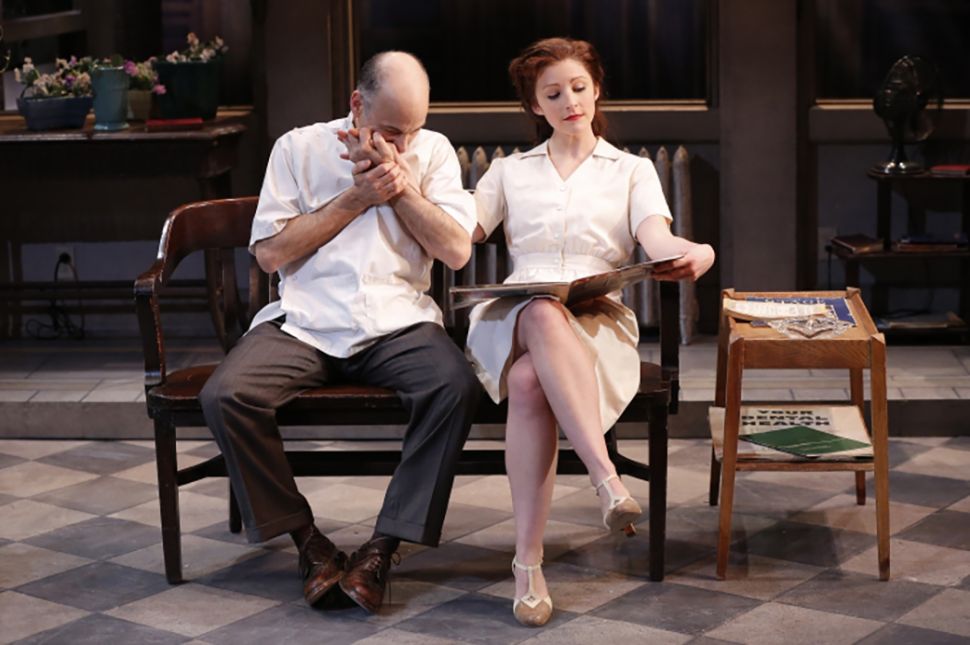