So…still not sure what to make of Better Call Saul, which seems to be Breaking Bad season 1 funny, which is to say, not quite a comedy. Not even like a Fargo-y, dark comedy (though look, “comedy is comedy” as a wise man once said about Family Guy), because BCS doesn’t revel in its torture porn. When you strip Better Call Saul of it’s…let’s call it whimsy, just this once…what are the building blocks of the show? Where does it want us to land, vis-a-vis Saul and his corruptible, irascible soul? Because last night felt like a series of those bullshit hypotheticals from those Lifeline exercises in Donnie Darko.

If only Saul could figure out where he fits on the fear-love continuum!

But…right? I think the show kind of WANTS us to think things are just that simple, and that it’s Saul’s fallibility, like Walter’s, that leads him down a path of ruin. What we’ve seen so far, however, suggests the cosmic forces at work in Saul/Jimmy’s* world are much more benevolent. That is the only difference between Breaking Bad and BCS, so far. Where Walter would need a Hail Mary pass on every occasion when the world seemingly aligned against him, it made him all the more culpable for his crimes. He wanted to succeed so badly, there was not a force on heaven or Earth that could stop him.

Saul is just…lucky? Unlucky? He needs new clients and is getting sued for his billboard resembling the emblem of his brother’s firm, so….a guy fall’s off the scaffolding of said billboard, and it’s all caught on tape, and now Saul/Jimmy has so many clients! And is so famous that he needs to hide the paper from his older brother, who is forced to venture forth from his agoraphobic nest and confront the Horrifying Machine Noises of Life. (By the way, I am never leaving the house again without my tinfoil cape again, because that’s EXACTLY the sound the Outside World makes. So good job on that, Mr. Gilligan.)

I mean, if it’s all just luck, you know…then what is Saul really but a guy being put in a series of scenarios that would trouble Annalise Keating’s class not a whiff? Um, take the bribe money or don’t, Saul. Or call it a “retainer.” This whole thing just kind of fell in your lap, and I never realllllly bought the part where Saul’s only moral/ethical compass on Breaking Bad was that he was a sleazy lawyer who wouldn’t do anything to compromise the integrity of his role.

I’m having a hard time picturing Saul taking the bar, and I bet that it’s going to turn out that he’s not actually an accredited lawyer. (Based on what we saw of last week’s flashback, someone behind bars for what seemed to be a serious offense would probably not be able to just go easy-breezy into the courtroom with his diploma. Just ask Stephen Glass, who isn’t allowed to become a lawyer just because that annoying guy from Star Wars played him in a movie!) Take a Xanax. Learn that violence is just a product of fear. And relax…now that I know you started in Cicero, I feel WAY less bad about you ending up in that frozen tundra of Nebraska.

And back to the set design/OCD-ness of Gilligan: that too, needs to lighten up. We’re not in Hannibal, or True Detective. Oh sure, Breaking Bad liked it’s emotional torture and crazy bursts of violence, but more in the way Wes Anderson likes eccentric-looking pets. It’s not the point; it’s just backdrop. It’s just a little tableau, putting hatchets in the hands of two twins (ZOMG!). And look, last night, that man in the alley isn’t even dead, because short-long-cons are back! (God, miss you Sawyer.) And Gus Fring? Let’s face (off) it: the shock of that scene is totally made all the more zany because like, an old man blew him up with a bomb connected to a bell on his wheelchair. How very…macabre! Vince Gilligan, are you sure you’re not secretly Wednesday Addams? Or maybe like Aubrey Plaza? Because you are one droll-ass motherfucker.

But see, my issue with this show–starting even with the SPECTACULAR classic wallet-Rolex con (Medium Cons 101, you guys) that was none the less David Blaine AH-MAZING because I didn’t even see it coming– was that its tone doesn’t seem sustainable. Breaking Bad wasn’t, ultimately, a comedy, though it was had moments of pure comedic brilliance. Better Call Saul is, as far as I can tell, not going in the direction of an hour-long romp of Ask Manson-like “bits.”
[youtube https://www.youtube.com/watch?v=fuiXOoJTeRI&w=420&h=315]

I mean, Bob Odenkirk is still wearing ridonk headpieces, but…

In conclusion, I need this show to lighten up a little, or else gleefully revel in its depravity. If I wanted to watch someone flounder around while pretending to have it all figured out, I’d go to #disrupt another school assembly.**
[youtube https://www.youtube.com/watch?v=Bm69pijepWA&w=560&h=315]

*Ugh with that mess, I’ll call him what I like and you’ll figure it out. This is Medium Con Advanced Placement: How to Get Away with Meh? D’uh.

**Donnie Darko was kind of a prick, looking back. 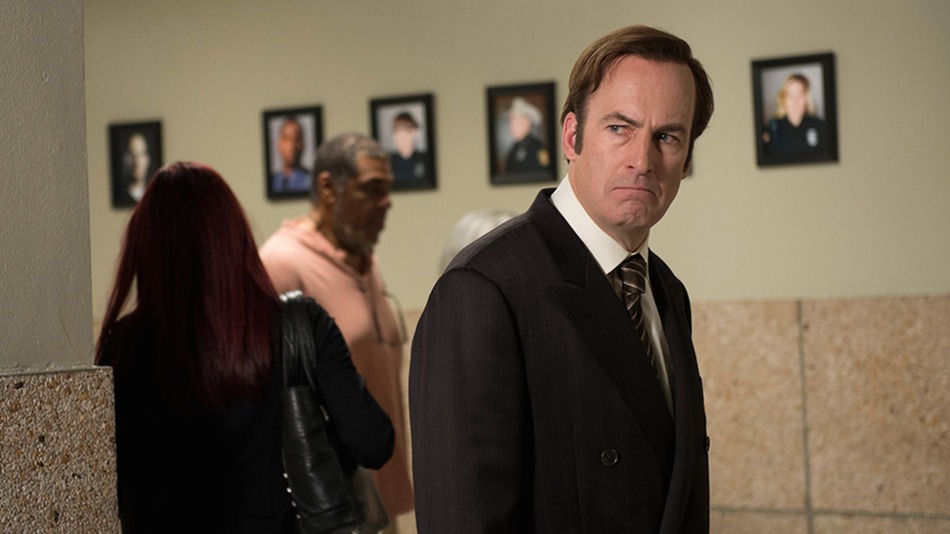