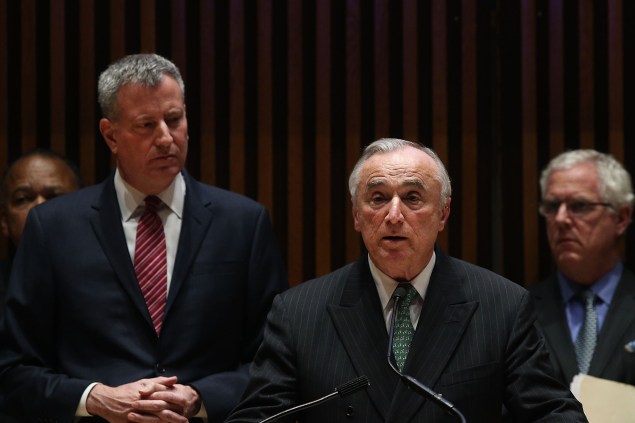 NYPD Commissioner Bill Bratton said today that morale among police is low—though he outlined efforts he and Mayor Bill de Blasio are making to address the damaged spirits.

Talking to host Joe Piscopo on AM 970 The Answer, Mr. Bratton blamed the weak esprit de corps on the murders of Officers Wenjian Liu and Rafael Ramos last December, and the bitter dispute between Mr. de Blasio and some police union leaders—most prominently, Patrick Lynch of the Patrolmen’s Benevolent Association.

“It’s no secret that the morale of the department these last couple months has been suffering, with the murder of our two officers and the contretemps involving the unions and the mayor,” Mr. Bratton said.

However, he said he and other top NYPD brass have made a coordinated attempt at outreach, going out of their way to personally mingle with the rank-and-file.

“One of the things that’s very critical in addressing morale is being there. The idea that if you can to be with the troops, be among them, even for a moment, being acknowledging of them,” he said, alluding to a similar strategy that Dwight Eisenhower employed with his troops during World War II. “We’re making a major effort to try and identify what, out of all the issues, are of concern to the officers.”

Mr. Bratton said that more long-delayed contracts with the police unions will be forthcoming—though he acknowledged that the arbitration process with the PBA will prolong the conflict.

“Contracts for four to five unions in the next couple of weeks will all have been signed. And, unfortunately, a lot of these unions are in arbitration and that will delay settlement of some of their issues,” he said. “We’re trying very hard to find common ground for everybody to get on.”