Building on his “Vision Zero” initiative to curb pedestrian fatalities, Mayor Bill de Blasio’s office announced today that 240 city trucks will be equipped with side guards.

Side guards are rails between the front and rear wheels of a truck that can protect pedestrians, bicyclists and motorcyclists from being caught under the vehicle in case of a collision with the side of a truck.

“We are committed to using every tool in our box–enforcement, education, and engineering–to save lives and make our streets safer,” Mr. de Blasio said in a statement. “Installing side guards on our City trucks will help prevent fatal collisions.”

The city identified 4,734 trucks appropriate for side guards. 240 trucks will be fitted with side guards in 2015, exempting trucks under 10,000 pounds, street sweepers, fire engines and car carriers. Each guard costs approximately $3,000 to purchase and install.

“After a decade of safe streets advocates demanding action on pedestrian and cyclist fatalities involving trucks, we commend Mayor de Blasio for showing the leadership to require side-guards on 240 city trucks,” said Paul Steely White, the executive director of Transportation Alternatives. “We look forward to seeing this first wave demonstrate the life-saving potential of truck guards so we can see them expanded to even more vehicles in the City’s fleet and beyond.”

As part of Vision Zero, Mr. de Blasio successfully pushed for the speed limit on local city streets to be lowered to 25 miles-per-hour last year. City officials credit Vision Zero with making 2014 the safest year for pedestrians since 1910 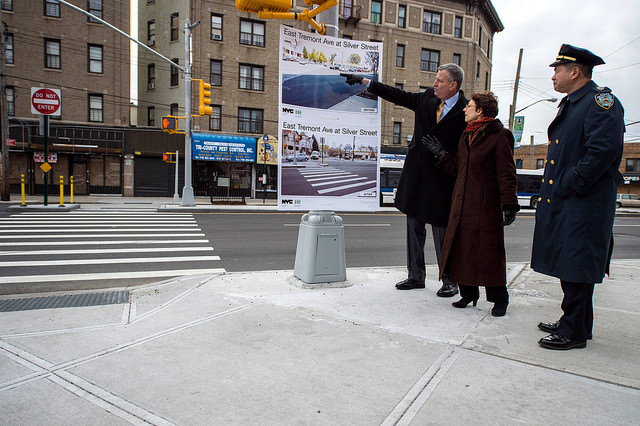