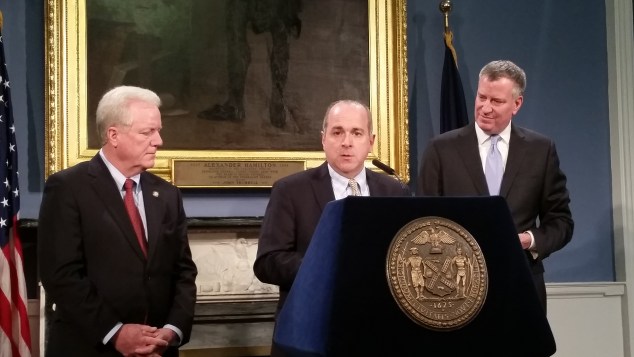 At the end of the day, he saw eye-to-eye with the nincompoop.

Mayor Bill de Blasio slung his lanky arm around Edward Mullins, the president of the Sergeants Benevolent Association, and mugged for the cameras at City Hall. Mr. Mullins grinned awkwardly, but his newfound, and once improbable, admiration for the Democratic mayor seemed genuine.

All it took was a new contract–and a few private meetings–to win over the irascible Mr. Mullins, a Long Island Republican. Just a few short months ago, Mr. Mullins could be counted as City Hall’s most cantankerous and media-hungry critic.

“Some relationships develop very naturally,” Mr. de Blasio said today. “Others, there isn’t that organic opportunity to get to know someone.”

Mr. de Blasio and Mr. Mullins announced this afternoon that the SBA had reached an agreement with City Hall on a new contract for their members, with gradual retroactive raises. The SBA became the fourth police union to agree on a contract with the de Blasio administration, leaving only the Patrolmen’s Benevolent Association waiting on a deal. The announcement seemed to validate Mr. de Blasio’s long held belief that his struggle with the police unions was about money, and not their inherent hatred of his liberal policies.

Mr. de Blasio’s bitter fight with the NYPD over the past year was a national controversy, leading many commentators to question whether he could even govern the city. Anti-police brutality protests blocked traffic in the days after a Staten Island grand jury voted not to indict a police officer in the death of Eric Garner and Mr. de Blasio, by empathizing with the protesters, alienated union leaders.

While Mr. Lynch seized headlines for declaring that the mayor had blood on his hands following the police murders, Mr. Mullins was arguably the mayor’s most reliable critic. In a constant drumbeat of newspaper, radio and television interviews, Mr. Mullins questioned Mr. de Blasio’s competency and even, most infamously, called him a “nincompoop.” At one point, Mr. Mullins said Mr. de Blasio should apologize to police officers.

Mr. Mullins first enraged Mr. de Blasio last summer when he said New York City was too unsafe to host the Democratic National Convention. (The city would ultimately lose the convention to Philadelphia.)

So furious was Mr. de Blasio at the “fear-mongering” SBA president that he urged elected officials to rip Mr. Mullins in public. They did.

But Mr. de Blasio, a tad indignantly, told reporters this afternoon to stop harping on the past. He was “moving forward.” People have opinions, the mayor insisted, and we should all just get over it.

“I know it is your job, and I respect it, to sort of take all the different quotes and moments in the past and try to rehash them and analyze them–I have to move forward,” Mr. de Blasio said, wielding one of his common refrains. “I’m not interested in talking about any specific quotes from the past.”

In his own gruff way, Mr. Mullins agreed. He compared their fights to “mud-wrestling” and invoked Abraham Lincoln, the president famous for bringing political rivals into his cabinet.

“The purpose of what we do is about people and when you’re not sitting in the same room and it’s clouded by other people’s opinions … you don’t get to discuss the real values of what’s important,” Mr. Mullins said. “What we were able to do was realize that the issues facing the City of New York are much more important than Mayor de Blasio and Sergeant Ed Mullins.”

A turning point in the contretemps, as several outlets reported, was a private January meeting in Manhattan brokered by a top de Blasio ally, taxi tycoon Evgeny Friedman. Mr. Mullins and Mr. de Blasio reportedly took in a New York Knicks game on television and against all odds bonded.

It didn’t hurt that Mr. de Blasio pledged to tuck money in the city budget to pay for new bullet-resistant vests, a priority for Mr. Mullins’ union.

But would Mr. Mullins oppose Mr. de Blasio if he tried again to bring a convention to the city? 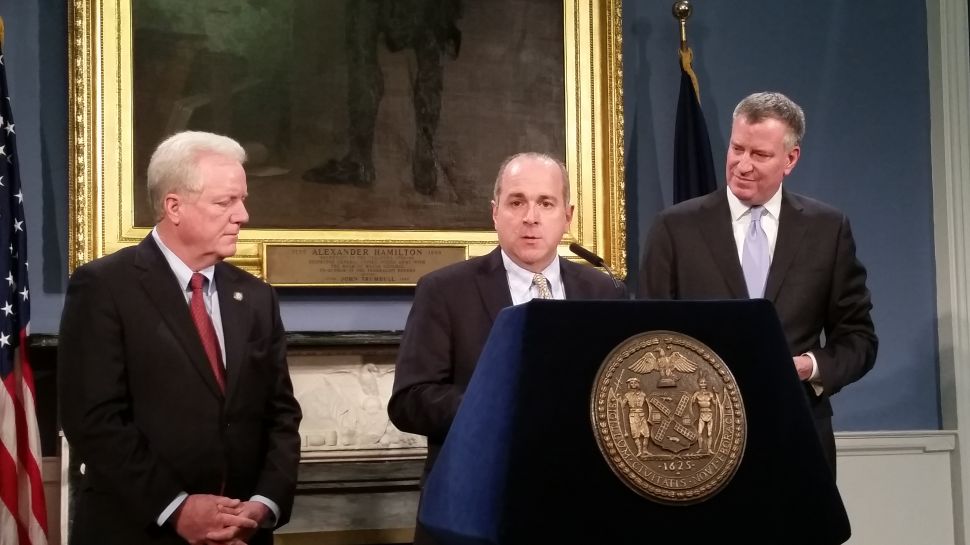