Mayor Bill de Blasio unveiled a number of policies in his State of the City today—but argued that none of them would be possible unless the city tackled his top priority: affordable housing.

“If you can afford to live here, then everything else becomes possible,” Mr. de Blasio said during his speech at Baruch College in midtown.

The mayor highlighted his achievements, he outlined plans for mass transit and the minimum wage. But over and over, he returned to the theme of affordability, presenting the high cost of living here—especially rent—as a danger to the city’s future.

“While the state of our city is strong, we face a profound challenge. If we fail to be a city for everyone, we risk losing what makes New York New York,” Mr. de Blasio said, going on to say that diversity—people of different races, different income levels, new immigrants—is what has made the city so vibrant. “It is what made us great and it will make us great again in the future, but only if we act now. And nothing more clearly expresses the inequality gap, the opportunity gap, than the soaring cost of housing.”

So Mr. de Blasio turned to the housing plan he unveiled months ago in May, this time making a concerted effort to discuss a subject that can be extraordinarily wonky—few New Yorkers know what mandatory inclusionary zoning is—in human terms.

“Half a million is more people than within the city limits of Miami. Take that, Miami,” he said. “This is what our housing plan does. It’s real. It’s tangible. It will make a real impact on people’s lives.”

In addition to affordable housing, Mr. de Blasio has called for the construction of 160,000 market rate units as well. He said he his administration would work at “cutting red tape” to make it happen quickly, calling for fundamental reform at the Department of Buildings.

And he called again for mandatory inclusionary zoning—requiring developers who want a property rezoned to commit to building permanently affordable housing as part of their projects, something previously voluntary.

“It’s an idea we need. It’s the simply idea of requiring affordability in all major developments. It’s a simple idea. It’s not an option, it’s not a maybe, it’s a requirement,” Mr. de Blasio said. “It has to happen. That’s the way we change the reality of our city.”

But, much like his roll-out of the affordable housing plan, today’s speech contained no information on the percentage of units he’d require a developer to keep affordable. (Voluntary programs that gave tax breaks to developers called for making 20 percent of units affordable.) And some experts doubt that mandatory inclusionary zoning is a cure-all for unaffordable housing.

Mr. de Blasio pointed to the first major fight over affordability during his tenure as an example of its success: the development of Astoria Cove, which after tough City Council negotiations will contain 465 units of affordable housing. The city’s old zoning policy would not have required any affordable units there, the mayor said.

But while the city’s zoning laws wouldn’t have required affordable units, they were part of the plan under the Bloomberg administration—20 percent of the development, or 340 units, were slated to be affordable as of April 2013.

The mayor also called for a new development in Queens, Sunnyside Yards, to resemble the 1947 development of Stuy Town in Manhattan—down to calling for the same number of affordable apartments, 11,250.

Mr. de Blasio admitted his affordable housing plan would be difficult to pull off. But, like his administration has often done, he compared this battle to a fight he’d won: universal pre-kindergarten, which many wrote off as impossible to pull off on the timeline he offered.

“Well, thanks to the tremendous energy of parents, activists, community leaders, elected officials and good everyday people throughout the city, we proved the cynics wrong,” Mr. de Blasio said. “And when it comes to affordable housing, we will prove them wrong again.”

Housing will be a different kind of fight. Mr. de Blasio will have to bend the will of developers and landlord groups who will be responsible for doing the building—unlike pre-K, which was funded with government dollars (still no easy task).

Kathryn Wylde, president of business group Partnership for New York, said affordable building in the Koch era only worked thanks to “robust public-private partnership,” and said collaboration was even more important today.

“While it was not explicit in the Mayor’s speech, I trust his administration understands that forging partnerships with the development and financial industries is the only way to accomplish his housing goals,” Ms. Wylde said.

Other groups seemed a little more confident in the mayor’s desire for public-private partnerships. Real Estate Board of New York President Steven Spinola tweeted that he was “ready to work w/ Bill de Blasio to put shovels in the ground & cranes in the sky to achieve housing goals.” 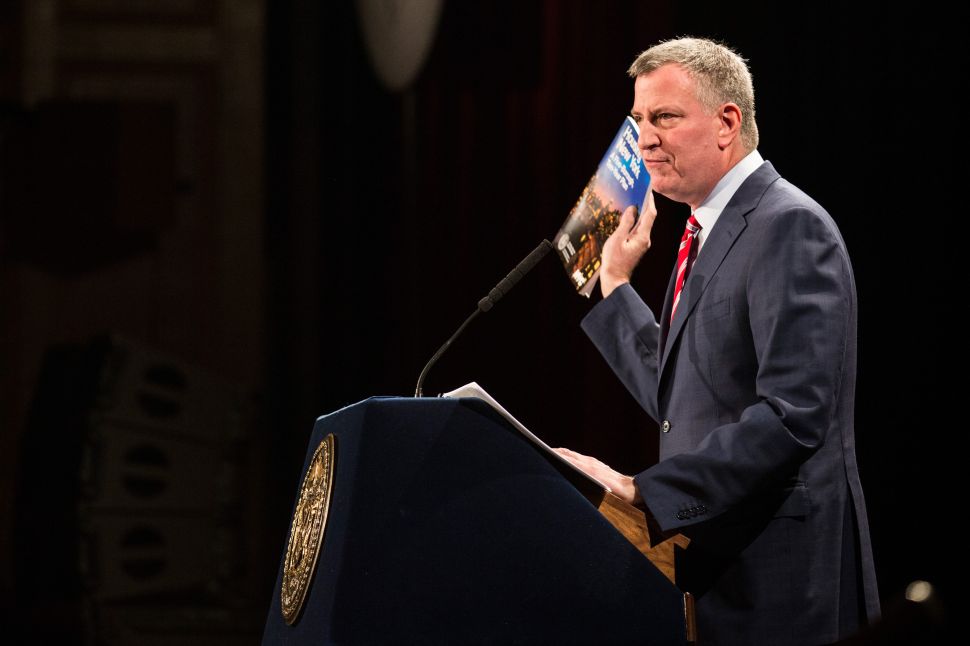