Mayor Bill de Blasio traveled to Williamsburg, Brooklyn today to survey the damage from a massive fire at a waterfront storage facility on Saturday.

On January 31, a six-alarm blaze broke out at the facility, sending a smoke plume into the air that could be seen for miles. Sensitive city records, ranging from court documents to financial information, were burned.

Today the mayor his first trip to the smoldering CitiStorage facility on N. 11th Street, where he received an update from the Fire Department and thanked firefighters who are still working at the scene.

“I just want to express my appreciation and I know people all over the city feel the same way. I hope you guys know there’s a very deep kind of appreciation for the work you do. I don’t know if people always stop you enough to say thank you, but every one of us feels it,” Mr. de Blasio told about 20 firefighters, according to a pool report from the scene.

The mayor, who as a councilman was arrested for protesting firehouse closures, also told the group he was “blessed” to have a firehouse one block from his own Park Slope home—and eventually was told that firefighters from that firehouse were on the scene in Williamsburg. The mayor sought them out to thank them.

Freezing conditions while the fire raged made it difficult to fight—as firefighters poured tons and tons of on the blaze the entire surrounding neighborhood essentially froze over. Mr. de Blasio apologized today for taking up some of the firefighters’ time in the cold.

“Sorry to make you stand in the freezing cold for a moment,” he said.

After the mayor’s tour, FDNY Daniel Nigro told the press pool that the conditions complicated the firefighters’ work.

“Unless you’re a polar bear this kind of weather is difficult. The thing I don’t miss from my days in uniform was being simultaneously cold and wet. So, it is a difficult time for firefighters,” he said.

Mr. de Blasio told the firefighters he hoped they would not have to battle many more seven-alarm blazes.

“I can imagine what kind of challenge it is when you’re in the middle of it. Thank God everyone came out safely,” he said. “I want to thank you all for that. I know you watch each other’s back … Job well done everyone.”

The cause of the fire hadn’t been determined, Mr. Nigro told the pool.

“Let me say, there is nothing we’ve uncovered yet that indicates that this fire is an arson fire. There’s nothing, and the investigation is in the early stages and it’ll be ongoing for quite some time,” he said.

As of today, the site is still smoldering and demolition work is ongoing. Confidential medical records were spewed around the neighborhood, allowing scavengers to pick them up and read them.

No one was killed in the blaze.

Updated, 1:26 p.m.: This story has been updated with information about Mr. de Blasio’s tour of the site. 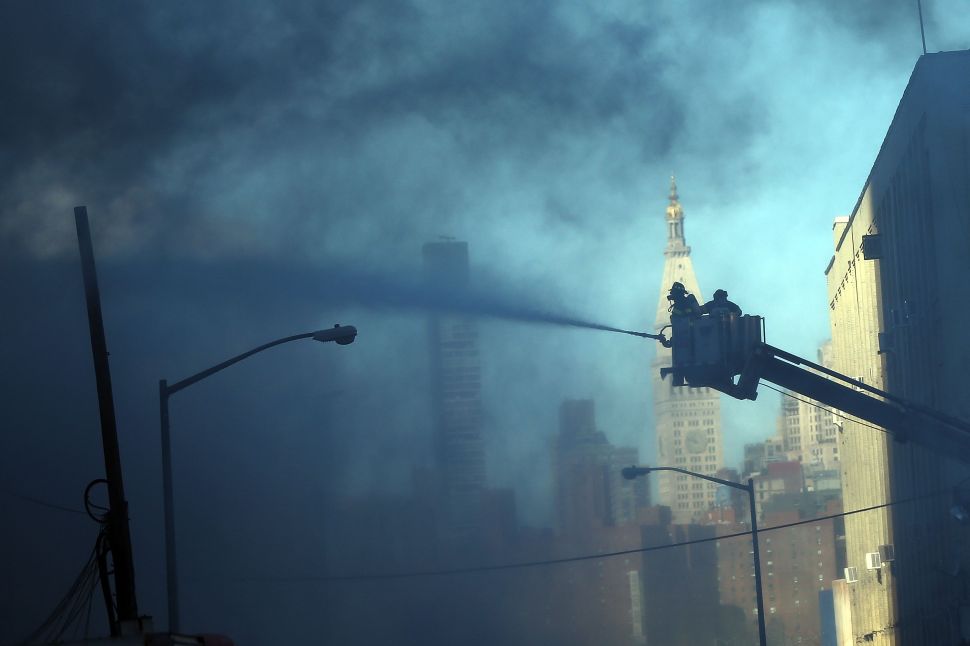