When Bill O’Reilly called Mother Jones reporter David Corn a “despicable guttersnipe” last week, you would have been forgiven for thinking “gutterwhat?” The insult, which has spiked at Merriam-Webster’s website—suggesting no one knows what the hell it means—is such an anachronism that if you use it you risk labeling yourself as an out-of-touch wacko, a master of obfuscation or a Victorian-era throwback. (It is a matter of opinion, of course, as to where Mr. O’Reilly falls on that spectrum.) Usage of “guttersnipe” seems to have peaked in 1949, according to Google’s Ngram Viewer—the year, it turns out, Mr. O’Reilly was born. The New York Times first recorded the insult, in hyphenated form, in 1884.

Mr. O’Reilly uttered the term in response to a Mother Jones report, now widely circulated, that accused the Fox News host of repeatedly lying about his coverage of the Falklands War in the early 1980s. But if his tirade seemed off-the-cuff, it is worth noting that Mr. O’Reilly has been branding his critics as guttersnipes for at least 10 years now, according to a LexisNexis search.

In 2005, Mr. O’Reilly suggested that Al-Qaeda blow up the Coit Tower in San Francisco when the city passed a ballot measure discouraging military recruitment in public high schools and colleges. After his incendiary remarks got him into trouble, he doubled down. “Some far left Internet smear sites have launched a campaign to get me fired over my point of view,” Mr. O’Reilly said. “I believe they do this on a daily basis. This time the theme is O’Reilly is encouraging terrorist attacks. Unbelievably stupid. Not unusual with these guttersnipes.”

The same year, Mr. O’Reilly managed to sneak in the phrase “far-left guttersnipe,” in reference to Al Franken, in a column about Howard Dean. In 2006, on the Talking Points Memo segment of his long-running TV show The O’Reilly Factor, Mr. O’Reilly took a moment to discuss what he referred to as the “demise of the far-left radio network Air America.” “As Alan Colmes has demonstrated,” Mr. O’Reilly said, “liberal radio rationally presented can be successful, but guttersnipes almost always fail in serious formats. As you know, conservative talk radio does have a few smear merchants who have been successful, but they are the exception rather than the rule.” (Notice the use of “smear merchants,” another insult Mr. O’Reilly applied to Mr. Corn on his talk show last week.)

In 2007, Mr. O’Reilly sounded off on the “dishonest guttersnipes,” or commentators, on channels other than Fox News. “They are essentially talking to themselves,” he observed. In 2008, in response to a question about his opinion of Keith Olbermann, who has his own problems to deal with at the moment, Mr. O’Reilly said: “I ignore all of those guttersnipes, because they’re just in it to hurt people.”

You get the idea. Liberals are guttersnipes. Though he doesn’t employ the epithet as often as his favorite silencer, “shut up,” it is the most striking word—or leitmotif, if you will—in the ongoing cacophony of phrases that make up Mr. O’Reilly’s bullying, demagogic vocabulary. But where does it come from?

The word has a couple of meanings, the most popular of which denotes a street urchin. “Homeless boys may be divided into two classes,—the street-arab and the gutter-snipe,” Methodist Magazine wrote in 1893. The term probably made its most prominent appearance in George Bernard Shaw’s 1912 play Pygmalion, and, later, My Fair Lady, when Henry Higgins refers to Eliza Doolittle as a “draggletailed guttersnipe.” (It is also a goblin-like creature in the fantasy card game Magic: The Gathering.)

But “guttersnipe,” which can refer to someone of low moral station, has a robust role in the history of feuding, which—and I may be giving him too much credit here—is most likely the tradition Mr. O’Reilly is tapping into.

“The word snipe, as excessive of contempt with an intimation of priggishness or pettiness, especially impertinence, was very common in Philadelphia as far back as 1835, as I can well recall my indignation when called by it,” the humorist Charles Godfrey Leland wrote, in 1900, in Notes and Queries: A Medium of Intercommunication for Literary Men, General Readers, Etc. “There can be no question that it came into use from the German schnipp or schnippish—snappish, pert, saucy. ‘Gutter-snipe’ began to appear in newspapers some years later. It would, however, be curious to ascertain whether the term does not exist in some form in old provincial English. ‘Gutter’ was very naturally added from its association with mud. It was generally believed in New England, and I dare say elsewhere, that the snipe lived by sucking mud.”

The “snipe” referred to is a kind of bird, which may make the insult seem quaint. But it is in fact banned from the House of Commons of the United Kingdom, along with “fascist,” “jackass,” “dog,” “cheeky young pup” and “hooligan,” among many others. The term carries with it a venomous bite in Britain. On June 22, 1941, the day Nazi Germany invaded Russia, Winston Churchill used the occasion to announce that Hitler, who had effectively broken the non-aggression pact between the two countries, was a “bloodthirsty guttersnipe.” Mr. Churchill was not immune from the insult himself. In 1950, Stafford Cripps, the Chancellor of the Exchequer at the time, accused Mr. Churchill of “guttersnipe politics” after the Prime Minister proposed forming a rapprochement with Soviet Russia and ending the Cold War.

Across the pond, “guttersnipe” has lived a fruitful life in American politics. In 1919, retiring Civil Service Commissioner Charles M. Galloway got into a heated public feud with Postmaster General Albert S. Burleson. Galloway said that Burleson was attempting to “debauch” the now-defunct Civil Service Commission. Burleson shot back, saying that Galloway had an “apparently uncontrollable infirmity.” “Mr. Burleson does what every guttersnipe politician does who has no truthful defense to charges made against him,” Galloway retorted. “He avoids the issue and resorts to mud-slinging.”

In 1941, Bronx councilman Louis Cohen lobbed a “guttersnipe” at Mayor Fiorello La Guardia after he had characterized Cohen as a “discredited public official.” Harry Truman deployed one at the expense of the right-wing columnist Westbrook Pegler. (In fairness, Pegler referred to Truman as a “thin-lipped hater.”) President Eisenhower denounced the scaremongering Joseph McCarthy as a guttersnipe—albeit in private. The list goes on.

The theme here, as it applies to the last century, is disingenuousness. If you are going to call someone—or something, as the case may be—a guttersnipe, then you are accusing that person of purposeful obfuscation, of distortion, of muddling the facts. It doesn’t take much imagination to point out that this is exactly what Bill O’Reilly does. The gutter press is his domain. He revels in it.

Since the Mother Jones story was published, ex-CBS staffers have come forward to corroborate the claims made against Mr. O’Reilly. Media Matters recently reported that Mr. O’Reilly lied about hearing the gunshot that killed George de Mohrenschildt, a friend of Lee Harvey Oswald’s. And now, the Guardian reports, Mr. O’Reilly appears to have embellished his account of covering the 1992 riots in Los Angeles, where he said he was “attacked by protesters.”

The TV host will most likely deny all of these claims, and Fox News will stand by him. But as Mr. Corn’s detailed report demonstrates, Bill O’Reilly is the true guttersnipe. 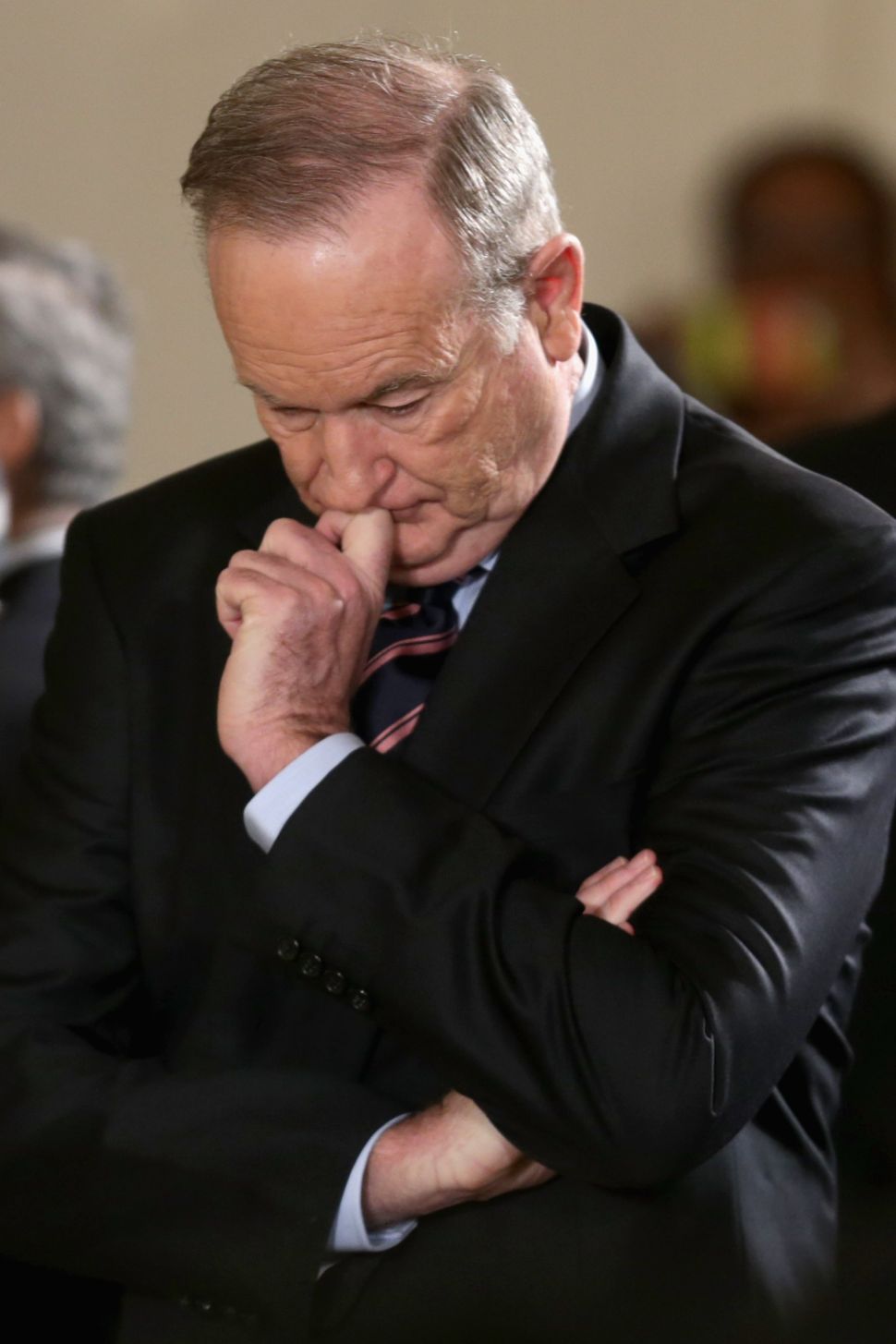