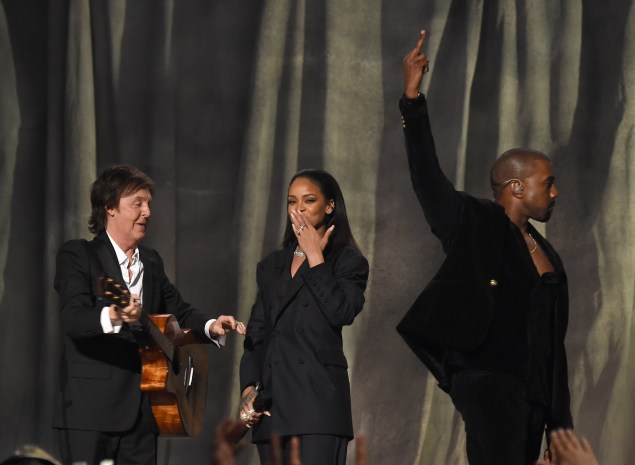 The ever-demure Kanye West performs at the Grammys with Rihanna and Paul McCartney (Photo: Getty).

The Internet is blowing up this week in the aftermath of Grammy week in Hollywood. There is sustained carpet-bombing of a controversial artist who publicly and unambiguously took down another respected artist for personal reasons that are still not fully apparent or explained.

How dare you, Bob Dylan.

I kid, of course. Mr. Dylan’s takedown—actually there were several—came in a Friday night speech to MusiCares, and he was hunting big game. Sacred cows, true legends, real pioneers—Lieber and Stoller, Merle Haggard, Tom T. Hall—were bagged, seemingly based solely on comments these legends may or may not have made about Mr. Dylan at the beginning of his career 50 years ago. His digs have been met on the Internet, by and large, with (1) excitement that he spoke at all, and (2) congratulations for telling his unvarnished truth in a town better known for hype and grin-fucking.

This is grudge-holding at a Michael Jordan level, and it livened up the usual parade of agent-thanking and feather-smoothing that are the hallmarks of award show season. To hear the people who were actually there tell it, it was flat out startling, as in “Is this really happening?” Great theater, made all the better by Mr. Dylan’s broader career reminiscence, packed with keen observation and the usual quips and turns of phrase. The Internet threw a little parade—“Zimmy’s still got it! The weatherman just told us which way the wind blows!” This was not unprecedented behavior by Mr. Dylan—he’s been sharing unkind opinions for years and years (cf Donovan, “Don’t Look Back,” 1964)—and this iteration was warmly applauded.

A couple nights later, it was Kanye West’s turn to share his untoward thoughts in dramatic fashion. Pretending to bum rush the Grammy Awards stage when Beck was announced as Album Of The Year winner over Beyoncé—a reprise of his interruption of Taylor Swift’s VMA win over Beyoncé in 2009—he stopped short of actually taking the mic as he did during that previous incident, instead pivoting, smirking at some friends seated in the front rows, and leaving the stage. Left at that, it would have been a funny, meta, and mostly harmless potshot.

But as has been exhaustively reported, Mr. West was not done. At a party later in the evening, he loudly stated that Beck should “respect artistry” and surrender his Grammy to Beyoncé. The adult public was emphatically and thoroughly unamused. The consensus is captured in the relentless use of the phrases “colossal ass” and “douchebag” across social platforms and online commentary. Memes have sprouted, violence has been proposed as a response—mostly kicking of ass and nuts as far as can be seen—and even Shirley Manson of Garbage—remember Garbage?—weighed in with a sternly worded rebuke that captured some attention.

There were very few knowing winks, fewer insider giggles, no nods of recognition, and no applause or kudos whatsoever—just sustained hectoring that would put an auditorium of high school principals and church ladies from the ’50s to shame. That Mr. West has a sense of humor can be ascertained by a cursory listen to his records—especially the early funny ones. College Dropout starts with Mr. West responding to a request from his school principal—voiced by Bernie Mac—to write an inspirational song—“something for the kids.” Mr. West responds with a reflection on their likely post-college career: “Drug dealing just to get by, stack your money ‘til it gets sky high” and then a celebration of life. “We weren’t supposed to make it past 25, the jokes on you, we still alive.” Listening anew, one notices that Principal Mac hectors the living shit out of Mr. West for this bit of irreverent truth telling, foreshadowing what has become routine for Mr. West in the ensuing years. But if there was “kind of a joke” in the Beck business, as Mr. West has claimed since, it was lost on just about everyone, people climbing over each other in a frenzied rush to tell him in vivid detail how much they despise him.

So why the hurricane of hate on Mr. West for needling Beck, while Bob Dylan gets a pass for the demonstrably unfair chopping down of American artists of substantially greater stature.

To be sure, it starts with that neat trick where Mr. West demands a given behavior while doing the opposite in that precise moment—what was it?—oh yeah, “respecting artistry.”

After that, the difference between Mr. West’s misbehavior and Mr. Dylan’s gets somewhat fuzzier. There’s a vein of criticism that posits that Bob Dylan’s talent and body of work has earned him the right to disperse shade at will, a right that auto-tuned, hyper-sampling Kanye West is not worthy of apparently. Mr. West’s marriage to Kim Kardashian is brought up frequently as justification for a beatdown. And then there’s his status as repeat offender, many people apparently at their wit’s end with Mr. West’s constant bad form.

Here we have two artists, infamous for their staunch unwillingness to ingratiate themselves with just about anybody, dropping bombs on innocent bystanders, with wildly divergent reactions from commenters in the ether. Is Mr. West really that much further on the wrong side of decorum—Shirley Manson went so far as to describe his stage-scaling pantomime as “savage”—as the haterrati would have you believe? Mr. Dylan’s eyepokes at Tom T. Hall—reducing his vast and mostly unassailable catalogue to a single, unrepresentative song, painting him in the same hue he used on Patti Page and “How Much Is That Doggie In The Window” in his autobiography—and Merle Haggard, a country music god who, aside from his massive contributions to the American songbook, has been revealed to have extolled Mr. Dylan’s greatness in no uncertain terms and recently recorded a Bob Dylan song with that other American treasure, Wille Nelson—are pretty close to unforgivable. And as noted, Mr. Dylan, too, is a repeat offender.

Draw your own conclusions. Kanye West operates with stunning creativity and accomplishment in a different but equally great and longstanding American art form, and does not suffer fools lightly, while dabbling in his share of foolishness, which puts him on the same general footing as Mr. Dylan. He has made his apologies, and his victims have handled the spectacle with heartwarming good grace, Beck taking the high road in very admirable good humor, and Taylor Swift hiring him to help her make some songs. Bob Dylan meanwhile has walked away from his carnage without further comment, so far even ignoring Hag’s outreach.

All in all, Yeezy and Zimmy conspired to make this year’s Grammy season one of the most amusing and entertaining ever. That the public meted out such different reactions is puzzling, and suggests that a certain double standard is sadly alive and well in the USA. 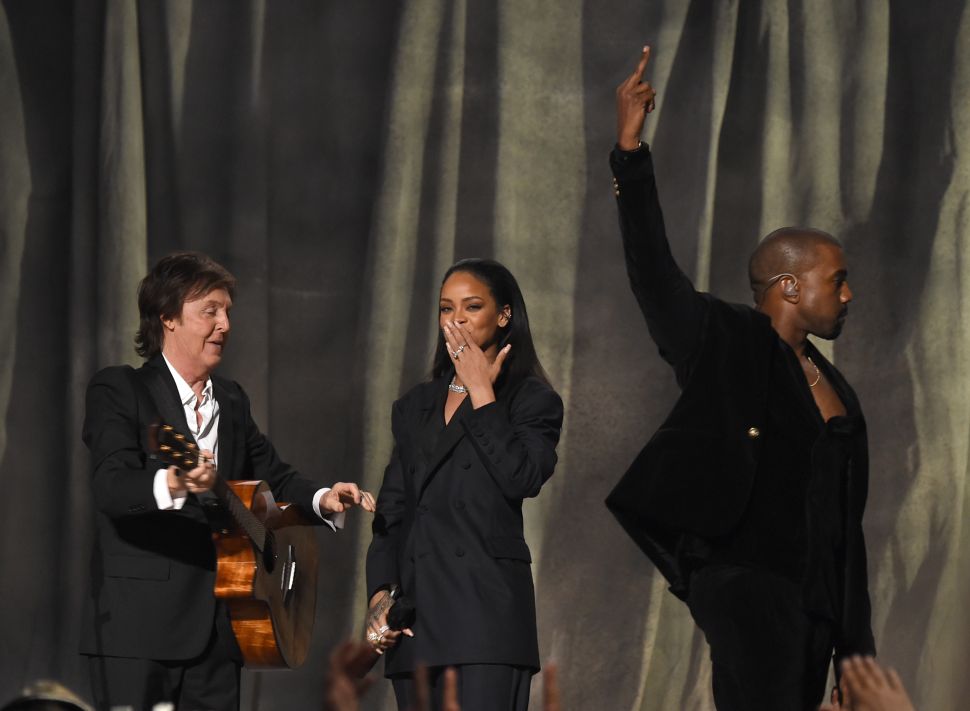