The building that houses Santina, the charismatic new restaurant from the Torrisi crew, is a gleaming glass box tucked under the High Line, like a festive sock drawer for twinkle toe delight. It’s filled with brilliance, bright blues and more shades of pink than a skin flick. From the slat wooden ceilings of the Renzo Piano-designed structure hang glowing Venetian glass chandeliers.Through hidden speakers, the tinny Italian classics of the ’50s and ’60s clamor like an unchecked 3-year-old. There are palm fronds in bright pots and Sambuca above the bar in neat Warholian lines. Even the waiters, in their Rod Laver sneakers, virginal white pants and SoBe-hued polo shirts seem extruded through a super-saturated Insta-filter.

But by far the brightest light comes from the kitchen. No one ever doubted, least of all me, that Rich Torrisi, Mario Carbone and Jeff Zalaznick, the three wise men of the Major Food Group, were capable of great things. Those who were lucky enough to eat at Torrisi Italian Specialties, their now-closed Nolita dissertation on the primacy of Italian-American cuisine served at a winningly affordable price point, have actually experienced their greatness before. But then they opened the aggressively priced Carbone, ZZ’s Clam Bar and recently converted Torrisi into a 15-seat fine dining experience. It seemed theirs was the American tale of rapacity and exclusion. That narrative is still probably true at some level, but Santina proves the plot is significantly more complicated.

Whereas Carbone (coal in Italian) is hard—hard to get into, hard in its pricing, hard to like—Santina, which means little saint, is half way to heaven in its holiness. The concept, says Mr. Carbone, is inspired by his paternal grandmother, Santina, who immigrated from the Sicilian coast to the Eastern Seaboard as a teenager. Santina turns to the sea, too, across the Tyrrhenian to the shores of North Africa. The menu, as sparse as that of Carbone, is so focused on vegetables it reads like teatime for dryads. “Palm cuisine,” Mr. Carbone calls it. That’s a variation on what Bobby Flay’s doing at Gato, taking inspiration from all the kitchens upon which the waters of the Mediterranean lap, but I have to say, I’ve rarely seen it done with as much lightness.

What’s so appealing about the place and the menu is that one never wants for the Torrisian sense of flair and spectacle, even while avoiding charges of unseemly consumption. When one orders, as one should, the giardinia crudité ($20), a spectacular terra cotta vessel exploding with shoots and leaves, bright greens, Pantone carrots and neon beets is borne through the room. It’s like bottle service for the pure of heart. The radishes are rad and the radicchio is ridiculous. There are enough delicious baby things—carrots, cucumbers, lettuce—to make even the most liberal among us pro-life. Even better, three sides, the colors of the Italian flag, accompany the dish in their bright ramekins. A garlick-y deep green Ligurian pesto, a classic anchovy sauce that made me rue as lost those years I eschewed the fish as fishy, and a piquant peppadew pepper emulsion. Does Papa like? Oh, Papa do, Papa do.

There’s bread service at Santina, too, if one asks for it, but bread seems a bit sodden in so light a menu. Instead, there’s cecina ($12), a Tuscan chickpea crepe accompanied by any of five fillings. Among the best are the avocado trapanese, a riff on a Sicilian pesto (itself a tomato riff on a Ligurian basil pesto), which flirts with being a guacamole, saved only by the addition of almonds and firmness of avocado. Weird Italian guac burrito, we salute you.

Nuts, as part of the North African influence, pop up in unexpected places. One doesn’t necessarily imagine one’s mouth quite so full of nuts at an Italian restaurant but time and time again, I found nuts in my mouth and I liked it. Statistically the largest section of the menu is given over to vegetables and fish, and among the 11 selections, the singular one—as a reminder, I do not order meat dishes—was the artichoke and grapes ($15). The Roman staple of fried artichokes is goosed up with braised cardooms, demi-sec red grapes, toasted hazelnuts and a slick of anchovy. Crisp, crisp, pop!

Mr. Carbone says he’d like Santina to be a neighborhood restaurant, one where locals can go two or three times a day. With the rent high and the locals rich (Julian Schnabel, whose work is installed in the restaurant, lives nearby), you can see why he’d want that. Seducing the daily diners, Mr. Carbone has leavened traditional classics in unexpected ways. Rice and pasta, hitherto stomach glue, have been knocked down, gut reno’d and rebuilt as tasteful aeries. The broccoli and pecorino rice ($15), for instance, certainly looks like a risotto but doesn’t a cement block one’s stomach make. (The trick is in thoroughly washed tamaki gold rice, a clever cadge from the omakase world.) Sheep’s milk-filled tortellini sorrentina ($16), one of the five pastas, nearly float in a pleasantly aqueous tomato sauce.

When he wants to play the heavy, Mr. Carbone can. Eat enough rigatoni norma ($15) and you ain’t going nowhere. But even at its most hardy, the food at Santina is agile, more Astaire than Kelly. Though one might mistake the funghi for chicken, there’s no meat in the meaty mushroom marsala ($23)—just abalone mushrooms, braised in sofrito, wine and the unexpected. And veal can take a huge sigh of relief. It has been made redundant. Run free, calf, run free.

Mr. Carbone is a clever one, in this and manifold ways. Santina is like a Christopher Nolan movie, with more layers (and more heart) than Interstellar. Nearly no meat in the Meatpacking? Subversive. Digging deep in the municipal archives to a time before carcass, when the land Santina occupies was the edge of Manhattan and home to a farmer’s market? Diligent. Forget all that for a moment, though not forever. On a dark night when the snow falls, on a clear day when the wind blows, filled with light, full of color, flavors bright and the action, oh, all the action on the table, Santina is just good, clean fun. 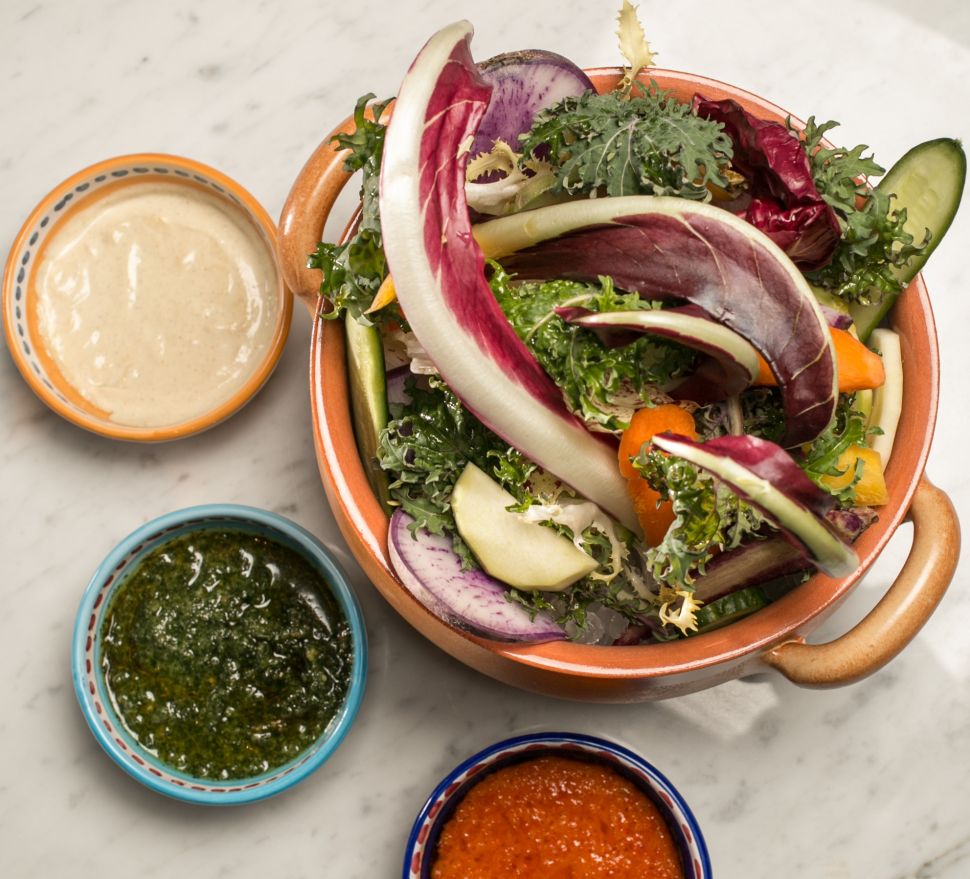