Keith Butler learned about it from his 14-year-old niece.

Alex Davidson learned about it from a girl he worked with in an after school program.

“It” is the brony movement, which refers to adult fans of the children’s television show My Little Pony: Friendship is Magic. Mr. Butler and Mr. Davidson were both skeptical of the group at the start.

“Every generation has something to shock its parents,” Mr. Butler told the Observer. “I thought it was odd.”

“I was expecting to watch something similar to Barney or Blue’s Clues,” Mr. Davidson said. “My expectation of the show was not very high.”

After looking at pony memes online and watching some episodes on YouTube, however, both men were hooked.

They, along with some of the 7-12 million other American bronies, will be representing the group at Ponycon 2015, taking place at St Francis College in Brooklyn from Feb. 14-16. Vendors at the event will include My Little Ties, makers of My Little Pony-inspired formalwear, and Ponycakes Cafe, which specializes in desserts inspired by the show.

The convention will also showcase the fan-made artwork that is a hallmark of the bronies. They are consistently adding new creations to Equestria Daily, the blog of the brony community.

“We have the most and best fan content,” Mr. Butler, a co-owner of the convention, said. “It’s a well put together fandom, we’re very engaged.”

“Bronies are an extremely art-driven group of people, and we thrive on the content that people make,” added Mr. Davidson, a brony artist himself.

Both men said that the positive message of the show was a welcome change from normal American history and culture.

“It was a reaction to the incredible sarcasm of the ’90s and the paranoia of terrorist attacks,” Mr. Butler said. “It’s pure, honest, sweet and kind. There are not too many layers other than ‘We want to be friends.’ ”

Bronies’ devotion to the theme of friendship led some media personalities to characterize the group as deviant–commentator Kurt Schlichter referred to the bronies as “pathetic sissies” and “perma-virgins,” while Jerry Springer had two bronies on his show and asked them if they had sex “horsey-style.”

“It’s not part of American culture for men to like something for little girls,” Mr. Butler said. “That’s why there’s a blue side to Toys ‘R’ Us and a pink side to Toys ‘R’ Us, with a wall in the middle. But we are a wholesome community.”

Mr. Davidson said bronies have a lot in common with other fan groups.

“Put a group of bronies, a group of Whovians and a group of Trekkies into a room with each other, tell them that they’re not allowed to talk about their respective fandoms and I guarantee that you’d have an extremely difficult time finding out who is who,” Mr. Davidson said. “Nerds are nerds no matter what flavor they come in.”

Bronies do more than just geek out over My Little Pony, however; they are also a very giving group. Through their charity organization Bronies for Good, fans have donated $943,000 to various causes over the last five years.

Given their charitable nature, it is somewhat surprising how young the bronies are. A brony statistician who identified himself only as “Drew” provided the Observer with demographic information which shows that the average brony is only 21 years old.

Despite its name, the brony movement also appeals to multiple genders. Eighty percent of bronies are male, 17 percent are female and three percent are transgender.

For Drew, the wide variety of bronies is a testament to My Little Pony‘s innocent nature–even though the bronies themselves seem strange at first blush.

“At first glance it seems a bit off,” Drew admitted. “But it’s honest with itself and doesn’t try to be pretentious. It’s just good animation and good moral values.”

Want to check out the brony movement for yourself? Ponycon runs Feb. 14-16 at St. Francis College in Brooklyn. Purchase tickets at ponycon2015.com 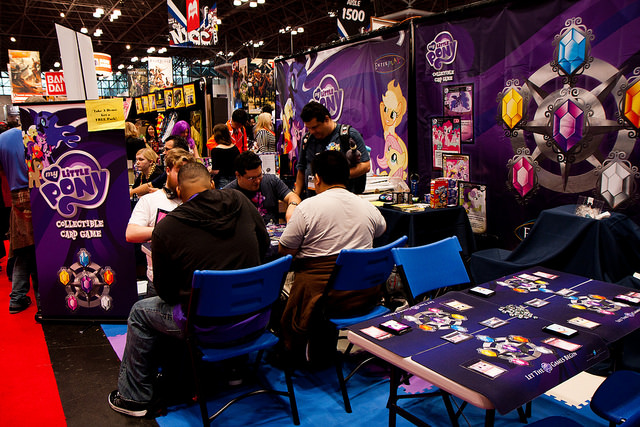