A day after federal authorities arraigned three young men in Brooklyn on charges of plotting to join the Islamic State of Iraq and Syria, Borough President Eric Adams announced his office would launch a new effort to help integrate Muslim youth into New York and American society.

Mr. Adams joined with heads of local immigrant groups from ex-Soviet republics in the Central Asia, which is the birthplace of the three men arrested for allegedly seeking to detonate a bomb in Coney Island, assassinate President Barack Obama and hijack a plane and take it to Syria. The Brooklyn leaders warned that many under-30 Muslims—like the three arrested yesterday—feel alienated in the United States, and find camaraderie and community in militant Islamic websites.

“We actively reached out to these communities so we could start a process of identifying their young men, bringing them in cross-communication with other young people throughout the borough,” Mr. Adams said.

The borough president said he intended to expand his Digital Dialogue program, which uses Google Hangout to allow high school kids to take part in citywide conversations, and said he would work with community groups to incorporate potentially disaffected and impressionable Muslim males.

“Many of these young men don’t understand how to be part of the American culture, and someone is not there showing them that process,” he said, suggesting that the Digital Dialogues would be an alternative to becoming involved in extremist online forums. “We want to be pro-active: go into these communities, establish relationships with the communities, identify their young people and have them talk to young people from America, from Brooklyn, so they can understand that the hate that they were hearing online, that the hate is not what America is.”

Mr. Adams, a former NYPD sergeant, said he did not favor reviving Giuliani and Bloomberg era police surveillance programs on Muslim communities. But he called upon local business owners to report suspicious activities to the authorities.

“Many who are seeking to hurt America are using legal businesses to accomplish that task, and businesses must play a role in assuring to identify with the police department, and must maintain open dialogue with the law enforcement community,” he said.

He warned that the Internet poses both a danger and an opportunity in dealing with the terrorist threat.

“It is extremely challenging, because you’re talking lone wolves, and you’re talking individuals who are basically getting their information from the wrong source, and because of the Internet and the ability of getting information globally, it’s a challenge,” he said, though he added that he believed law enforcement was managing the problem well. “But aggressive actions of the NYPD, the Joint Terrorism Task Force, the FBI, they are really keeping their finger on the pulse and identifying those patterns.”

Two of the men arraigned yesterday were current Brooklyn residents, the third was a former Brooklynite living in Florida. 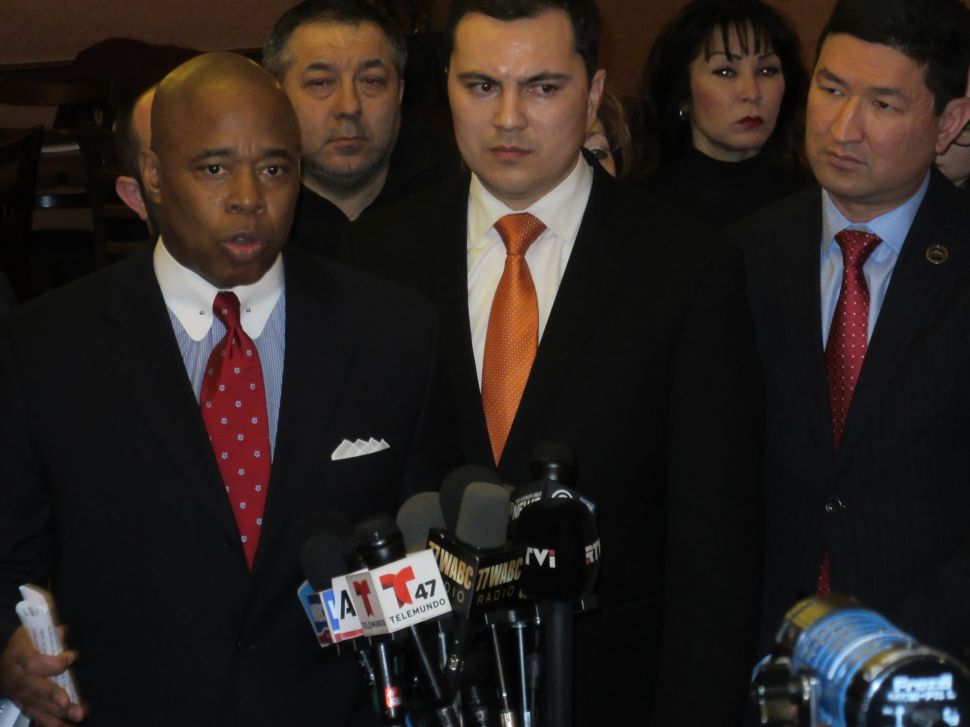