Mayor Dr. James A. Fazzone, one of a number of Democrats who backed the 2013 re-election of Gov. Chris Christie, announced on Wednesday that he intends to change his party affiliation to become a Republican.

Fazzone, who is up for reelection this year, was first elected as Mayor in November of 2007.

“I was elected Mayor by the citizens of the City of Burlington. Since day one, my job has been to serve them not a political party,” said Fazzone, “As I have worked to affect positive change for our residents, from reviving our youth football program, adding recreational soccer fields, and bringing new businesses to High Street, it has become abundantly clear that my vision for a better future for our great city is far more aligned with the Burlington County Republicans.

“I know this decision may surprise some of my Democratic friends, but I want everyone to know that outside of my party affiliation, I have not changed who I am and never will,” the mayor added. “The unfortunate reality is that at each turn, whether it has been to expand services for our residents or to take serious steps towards revitalizing our community, the most consistent opponents of progress have been my Democratic colleagues on City Council.” 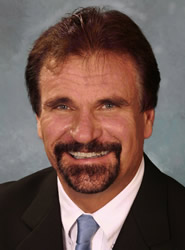