ALBANY–For the first time in two decades, the State Assembly voted overwhelmingly today to elect a new speaker, Carl Heastie of the Bronx, to preside over the chamber after Sheldon Silver’s swift and stunning downfall.

Mr. Heastie, 47, became the first African-American speaker to lead the Assembly. The taciturn Democrat, an accountant by trade, will be charged with uniting the diverse and unwieldy 150-member body in the wake of Mr. Silver’s resignation, a daunting task for any legislator.

“There’s no question that the actions of a few have led to cynicism,” Mr. Heastie said in his speech today. “Our state deserves a government as good as its people.”

Mr. Silver, who had the second longest tenure of any speaker in New York history before he faced federal corruption charges in January, thoroughly dominated the Assembly since his election in 1994, thwarting governors and mayors while advocating certain liberal positions in the face of Republican opposition. Mr. Heastie’s ascension marks the end of an era in Albany–a transition from the canny, Sphinx-like Mr. Silver to a political unknown in Mr. Heastie, the chairman of the Bronx Democratic Party.

To most New Yorkers, Mr. Heastie is an unfamiliar face. A shy former accountant in the city comptroller’s office, he hails from a middle class, overwhelmingly black pocket in the northeast Bronx. In a Balkanized borough, the cerebral Mr. Heastie earned a reputation as a calming force, overthrowing a divisive county leader in 2008 and quelling much of the infighting that had plagued Democratic politics there.

“Wow,” Mr. Heastie said after he had ambled to the rostrum at the front of the chamber. “This will actually be the longest speech I’ve ever given.”

Mr. Heastie, a Stony Brook University graduate, emerged as a front-runner to succeed Mr. Silver after it became clear the Manhattan Democrat had lost the trust of his colleagues. Four other rivals opposed Mr. Heastie, but he deftly outmaneuvered them all, securing the votes needed to force each and every one from the race. The last to drop out was Assemblywoman Cathleen Nolan, a Queens Democrat, whose concession paved the way for Mr. Heastie’s rise.

For a moment, he seemed to disbelieve that he had actually won. “For a Bronx boy who majored in applied math and statistics, this is one probability that I could never forecast,” he said.

Mr. Heastie becomes one of the three most powerful elected officials in the state at a particularly precarious time. Corruption scandals continue to rock the chamber with little end in sight. Several crucial laws pertaining to New York City’s real estate industry and tenant class are due to expire this June.

“As we find ourselves at a critical juncture, we must maintain our resolve to move our state forward even as we must reform this institution,” he continued. “We have to move quickly to complete the job that the people of New York sent us here to do.”

In an olive branch to an increasingly vocal bloc of reformers in the chamber, Mr. Heastie promised to increase disclosure requirements for lawmakers’ outside incomes and to cap them altogether. He hinted at further, sweeping reforms.

Mr. Heastie said that “need for reform in Albany did not begin in the last few weeks. For years now, there’s been a call for bringing sunlight to the Capitol. And the time is here for us to act.”

“We need to democratize our legislative process. We need to take advantage of the talent and skills of every single one of our members–you can applaud for that–from the most senior member to those most recently elected,” he added.

But editorial boards and good government groups expressed some dissatisfaction with how quickly the Assembly moved to elect Mr. Heastie at the expense of a longer, more open debate. Unlike the New York City Council’s speaker’s race of 2013 and early 2014, there were no forums for the candidates to state their positions to the public. A speaker vote was originally scheduled for February 10; Mr. Heastie’s allies successfully moved it up one week.

Mr. Heastie’s record is also drawing new scrutiny. He passed relatively few bills of consequence since he was elected in 2000 and caught the attention of an anti-corruption commission for failing to itemize thousands of dollars in campaign expenditures. He missed more votes than the average Assembly member while claiming more in per diem reimbursements than most. His inner circle, consisting of a Bronx attorney and lobbyist touched by scandal, Stanley Schlein, has raised eyebrows.

For New York City liberals like Mayor Bill de Blasio, Mr. Heastie will be a crucial bulwark against a Republican-dominated State Senate and even Gov. Andrew Cuomo, a fellow Democrat with a centrist streak.

Mr. de Blasio is not known to be especially close to Mr. Heastie. But with his election today, Mr. Heastie may become Mr. de Blasio’s best–and most powerful–friend in Albany.

“New York City needs a strong voice in Albany—and the election of Carl Heastie as Speaker of the State Assembly will ensure that our needs are heard and met,” Mr. de Blasio stated today. 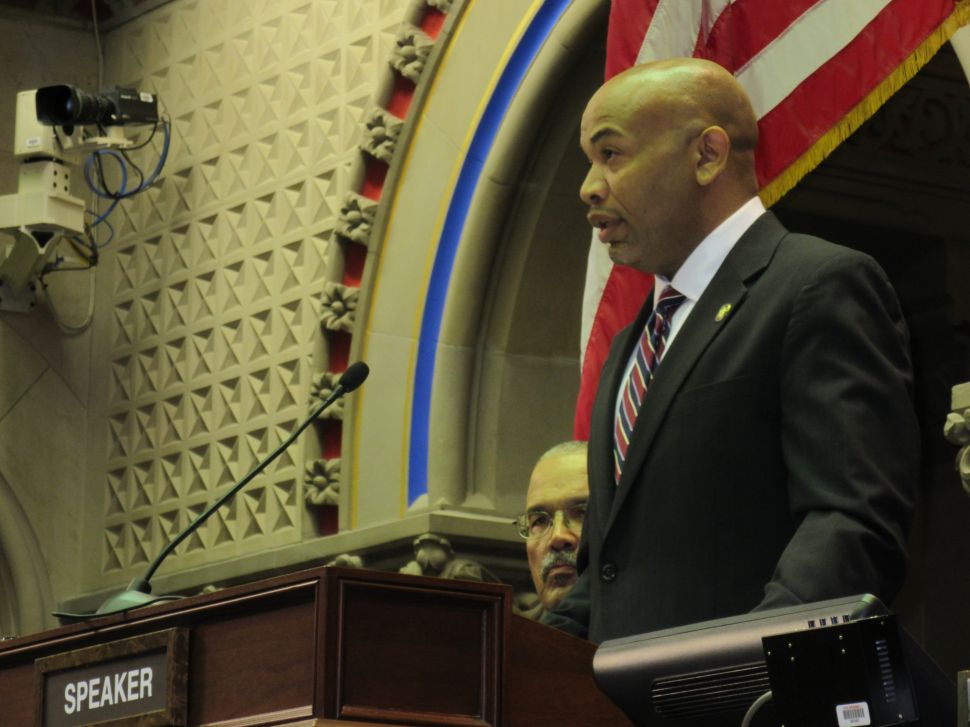