UPDATE (Feb. 22, 2 pm): This story has been updated to add comment from Jerry Langer, one of the NJ attendees at the Thursday night Scott Walker fundraiser.

Scott Walker spent a profitable 24 hours in town and departed with plenty of NYC cash. But perhaps even more encouraging for fans of the Wisconsin governor is that his haul included dollars from at least four prominent New Jersey contributors, the Observer has learned.

Last night the Observer reported on the surprising muscle Gov. Scott Walker had shown in assembling four different New York City events. Those included two meet-and-greets with high-powered Republican influencers—Rudy Giuliani’s remarks at the first ensured that everyone in the country would know that Mr. Walker was in town—and two traditional fundraisers.

The Observer has learned that last night’s fundraiser was attended by at least four prominent New Jersey donors, further calling into question the hold New Jersey Gov. Chris Christie can exert over his home state contributors.

Mason Simpson, an attorney from Holmdel who practices law at Brown Rudnick, attended the event and describes himself as an enthusiastic convert. In an interview with the Observer, Mr. Simpson said, “I was extremely impressed. I went there undecided and not very excited. I left with a very positive impression and will be supporting him.” Mr. Simpson, who has been active in support of Republican candidates including Senator Thom Tillis, said that he had decided against supporting Jeb Bush because “by virtue of his last name, he cannot beat Hillary Clinton. That disqualifies him.”

As for Mr. Christie, Mr. Simpson said, “I thought Christie did a great job in his first year and that was the last time he had any success. He hasn’t accomplished anything since his first year and seems to have been running for president the whole time. I had really high hopes for Christie but he petered out and became a big disappointment. My property taxes are still outrageous.”

Other attendees included trucking industry heavyweight Jerry Langer. Just yesterday, Mr. Langer was mentioned by The Washington Post as having appeared on a list of “two dozen New Jersey major contributors committed to Christie’s new political committee,” which was provided by the Christie campaign. Mr. Langer, who also attended a fundraiser for Gov. Bush on January 8, contributed at least $4,300 to Mr. Christie’s 2013 re-election campaign and was also a reliable fundraiser for other Republican governors when Mr. Christie called on him in his role as head of the Republican Governors Association.

In a phone call and subsequent email to the Observer, Mr. Langer made clear that while he attended the events for Mr. Bush and Mr. Walker, he remains committed to Mr. Christie. “I attended because a friend asked me to do so as a favor to him and since no one is an official candidate at this point, I felt that as a responsible person and as a friend to the person who asked, I would go and hear Gov. Bush speak. … I have nothing against Governor Bush and think he’s a good man but my choice and unequivocal support for a candidate for 2016 is New Jersey Governor Chris Christie.

Other New Jersey attendees at the Walker event included Rich McGinn, the former Lucent CEO who was a mentor to U.S. Senate candidate Carly Fiorina and Seth Cohen, the Upper Saddle River founder of Eleven Canterbury who maxed out to Mitt Romney in 2012 and gave at least $10,000 to the RNC plus New York-area Republican candidates like Lee Zeldin, Michael Allegretti and Nan Hayworth.

The Observer‘s cover story on Mr. Christie weeks ago unveiled the shocking breadth of Jeb Bush’s New Jersey support, revealing a dozen names of high-profile Garden State supporters and the eye-popping totals Mr. Bush was collecting. The New York Times and Washington Post followed with their own stories, with the Times adding a devastating headline—Critics in G.O.P. Say Chris Christie Is in a ‘Bubble’—to what’s shaped up as a rough month or so for Mr. Christie.

Presidential campaigns are long affairs and there are still more than 10 months until the first Republican caucus. Chris Christie is an agile candidate who has shown resilience before; he will have good weeks and other candidates will have bad weeks. But what’s emerging is a dynamic that shows Mr. Christie exposed on at least two fronts.

Jeb Bush, with backing from giants like Henry Kravis and Woody Johnson, is emerging as the clear choice among the Republican establishment. And Scott Walker is quickly separating from the Paul-Perry-Cruz-Santorum-Carson-Rubio pack as the choice among donors looking for an alternative to the establishment candidate.

This leaves Mr. Christie in a bind. Just four years ago, the establishment, unsatisfied with frontrunner Mitt Romney, begged Mr. Christie to enter the race. Mr. Christie demurred, citing unfinished business in New Jersey. He endorsed Mr. Romney and brought with him every single New Jersey Republican of weight, with no exceptions. That ability to enforce party discipline in 2012 is what makes this year’s sudden willingness of New Jersey bigs to desert the state’s leader a shocking turn of events.

The pressure is evidently getting to the people around Mr. Christie. In addition to providing a list of still-committed donors to a newspaper, Team Christie took the unusual step of lashing out at a donor capable of bundling huge amounts, Jets owner and oil baron Woody Johnson. According to the Times, “a person close to Mr. Christie brushed [Woody Johnson’s endorsement of Jeb Bush] aside by describing Mr. Johnson as a disgruntled team owner who got sweeter subsidies under Mr. Christie’s predecessors.”

That’s a fairly shocking thing to say about a donor, whether he supports Jeb Bush or not, especially considering the past close relationship of Mr. Johnson and Mr. Christie and the fact that the former’s team plays in the latter’s state. With Scott Walker and Jeb Bush both competing hard for New Jersey money that Chris Christie must have assumed would be low-hanging fruit, a little testiness from the say-it-like-it-is governor is probably just the beginning. 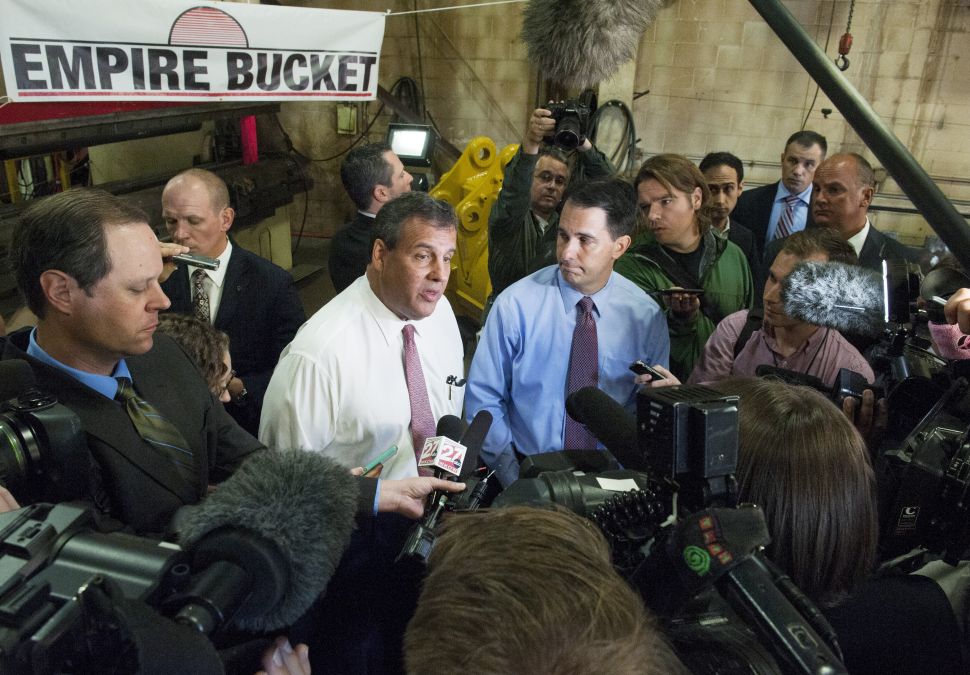