“No,” said Mr. Goed, a sales director at The Corcoran Group, the beams were merely functional, having nothing at all to do with salesmanship or aesthetics. “Those are actually just holding up the second floor of the building.” We stood corrected.

Nonetheless, he said, Village Green West’s design had been inspired in part by turn-of-the-century buildings from the neighborhoods at whose crossroads the building will stand: Meatpacking, Chelsea, the West Village. Its exterior will be of darkish red brick, its windows large, steel-spandreled in the French industrial mode. The interiors are another story.

“The systems powering the building are state of the art; but you won’t see them,” said Michael Namer, CEO of Alfa Development. The layouts are sleek, airy, open and modern, boasting Poggenpohl cabinetry and Miele appliances; the building is designed to recall an industrial conversion without laying it on too thick.

Alfa’s new development aims for LEED Gold certification, which would make it the developer’s fourth building so-designated, and with 65 percent of its initial offerings sold—mostly one- and two-bedrooms—Alfa is releasing into the market this week Village Green West’s four so-called “Tower” units: Full-floor spreads at the tippy-top. Each of the units, including the penthouse, will be in the neighborhood of 3,000 square feet, with significant outdoor space on variously configured terraces. Two have three bedrooms and two have four. Prices will range from $7.25 million to $9.5 million.

Nearly an entire wall of the sales gallery living room was taken up with a blown-up photograph approximating the south-facing view from the building’s upper floors; it stretches, mostly unobstructed and tinctured pink with sunset, to the World Trade Center. The materials in the distance were new. But the vantage, of course, rather classic. 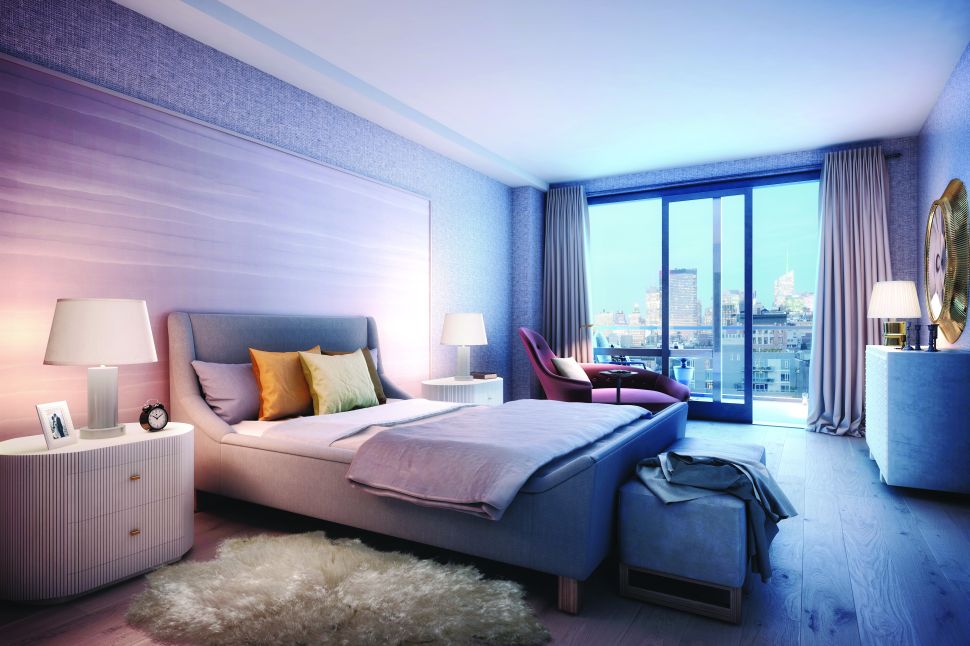