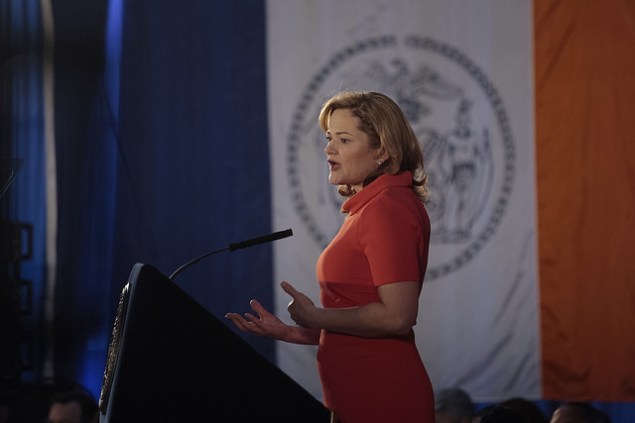 For Melissa Mark-Viverito, IDC may be stand for “I don’t care.”

The liberal Council speaker tweaked the Independent Democratic Conference in a radio interview today, implying the group of breakaway Democrats has not, in the past, made New York City public housing a priority in the State Senate. Her comments came a day after their leader, Bronx State Senator Jeffrey Klein, rolled out a report slamming the New York City Housing Authority for failing to properly maintain their buildings.

“Let me just say this, I am surprised that the IDC suddenly finds public housing of interest,” Ms. Mark-Viverito, with a strong hint of skepticism in her voice, told WNYC’s Brian Lehrer.

“IDC being that branch of the Democratic Party that was aligned with the Republican Party in the last session?” Mr. Lehrer asked.

“Yes and I welcome any interest in helping support our public housing stock. Maybe Senator Klein can help us advocate for state funding for the New York City Housing Authority,” she continued.

“Some of the recommendations and findings in that report are things that have been discussed over time and for those of us that are deeply involved in this issue, it’s nothing new,” Ms. Mark-Viverito added.

The jabs at the IDC, a bloc that for two years led the Senate with the Republican Conference before the GOP won an outright majority last year, are rare for Ms. Mark-Viverito, a diplomatic Democrat. Her ally, Mayor Bill de Blasio, endorsed Mr. Klein’s re-election bid in 2014 after progressives attacked the IDC leader for sharing power with GOP lawmakers, who are predominately based in the suburbs and upstate where funding and fixing NYCHA is less of a priority.

Ms. Mark-Viverito, along with Mr. de Blasio, had kind words for Mr. Klein last year after he helped secure state funding for the mayor’s prekindergarten initiative. But Mr. Klein, an ally of the real estate industry, is more fiscally conservative than Ms. Mark-Viverito, a point she appeared to hint at today.

A spokeswoman for Mr. Klein, Candice Giove, pointed out the senator had allocated 3.71 million to upgrade three public housing developments in his district. “In addition, over the years he has secured hundreds of thousand of dollars for NYCHA developments. Senator Klein is aware of the problems and wants to be part of the solution,” Ms. Giove said.

“He’s been my senator for the last decade and he is one of the best advocates for public housing I know,” Mr. Torres told the Observer.

In a statement after the radio interview, Ms. Mark-Viverito’s office sought to soften her on-the-air comments.

“As outlined in her State of the City, NYCHA is a priority for the Speaker and the Council and we look forward to working with the IDC and all stakeholders to ensure NYCHA gets the funding it desperately needs,” said Eric Koch, a Mark-Viverito spokesman.