Gov. Andrew Cuomo today rolled out a five-part plan he claimed would prevent a recurrence of the sort of scandal that toppled Assembly Speaker Sheldon Silver in January—and said he would not allow a budget to pass that did not incorporate his proposals.

Speaking at New York University Law School, Mr. Cuomo repeatedly invoked the name and legacy of his late father, former Gov. Mario Cuomo, in describing the state’s chronic problem with corruption and the need for reform.

“This has been a difficult month for the state of New York, the reputation of the state of New York,” Mr. Cuomo said, alluding both to his father’s death and Mr. Silver’s arrest earlier this month, and arguing that the elder Cuomo would be greatly disturbed at the latter event.  “I’m sure he would be outraged at reading these headlines.”

“He battled the dragon of corruption for 12 years. The dragon, obviously, survived,” he continued, remembering the conviction of former Speaker Melvin Miller during his father’s administration.

“The reputation for corruption in Albany is nothing new. It actually goes back to the time of Lincoln. My father’s administration saw speakers indicted, saw assemblymen go to jail,” he said.

Mr. Cuomo attacked the current system, which treats legislative duties as a part-time job, and encourages lawmakers to seek outside income, usually as attorneys. This arrangement is an inheritance from the Revolutionary War era, when citizens feared that lawmakers would be beholden to a power structure that paid them and thus sought to limit the payment of the legislature.

“Their response was no salary for the legislators because they don’t want that connection to the government. However, today’s problem is the exact opposite,” he said. “The concept of part-time employment as a legislator is problematic in modern society.”

U.S. Attorney Preet Bharara has accused Mr. Silver of collecting referral fees as outside income from law firms with clients who have business with the state, and thus monetizing his powerful position.

“A single corruption case is one too many. The challenge is the inherent conflict of interest posed by outside employment. The constant question is whether clients are seeking undue influence, are clients paying privately for the actions of a public official? And who does the legislator represent at the end of the day, his or her constituents, or some undisclosed client interest?” Mr. Cuomo said.

The governor stopped short, however, of calling for the abolition of outside income. Instead, he proposed a complete disclosure process where legislators would have to reveal the precise details of where they receive money for private work, exactly how much they get, the work they performed and any potential conflicts of interest

Mr. Cuomo said the second part of his plan is to amend the state constitution to prevent legislators convicted of corruption from receiving a public pension, while the third is to weaken the position of Assembly speaker by limiting its influence over the members of the body.

“The rules of the state Assembly centralize power so that individual members are virtually powerless to move legislation. This is the Assembly’s opportunity to enact a new, fair and open system,” he said, echoing the ideas of the 23-member “reform” caucus that emerged in the Assembly following Mr. Silver’s arrest.

He did not outline any plan to similarly loosen the grip of the State Senate majority leader—which, combined with the speaker and the governor, forms the “three men in a room” arrangement that steers state government.

Mr. Cuomo also noted that state lawmakers, who have gone without a raise since 1999, supplement their income with special leadership perks and reimbursement for expenses—which often require the approval of the speaker, strengthening the position’s influence.

The governor also called for overhauling state rules to block politicians from using campaign money to cover personal finances, to force greater disclosure of the sources of campaign money and also to institute a system of public financing of elections.

“Public finance is the only option to ensure democratic access to the system,” he said. “We are proposing the strongest campaign rules in the country, by increasing the frequency and the detail of independent and campaign finance expenditures.”

Mr. Cuomo anticipated resistance to the plan, but said he would force the state legislature’s hand—even if it meant shutting down the state government.

“The governor can effectively say to the legislature, ‘Either pass my budget, or shut down the government,” he said. “Change is disruptive, and transformative change is highly disruptive. And make no mistake, this will be highly disruptive.” 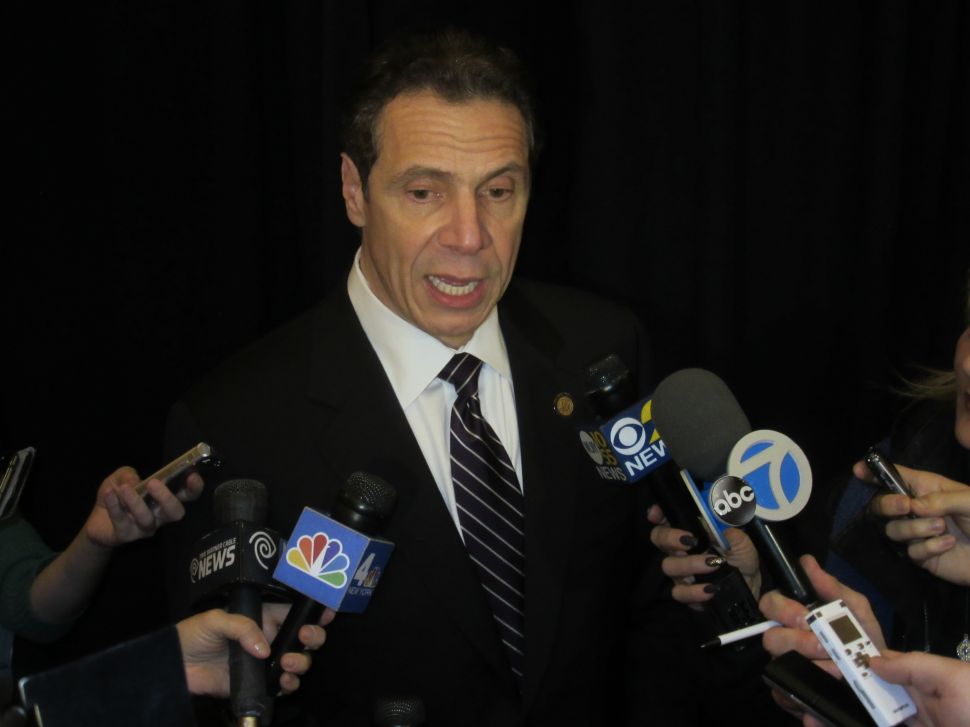