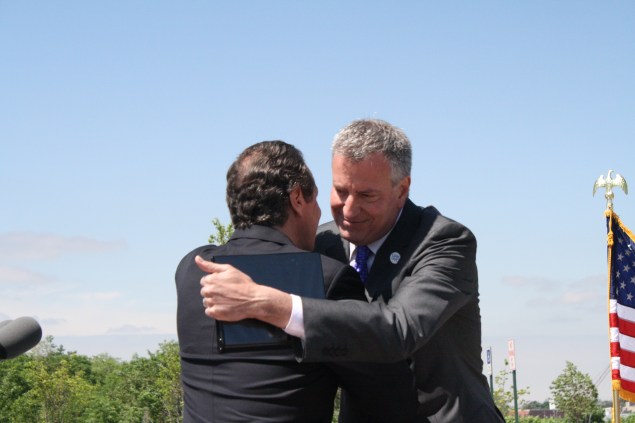 The best relationship between a mayor and governor in modern political history? Bill de Blasio isn’t so sure.

The liberal mayor questioned the governor’s claim today that he and Mr. de Blasio share a bond greater than any New York City mayor and governor in “modern political history,” telling reporters that he wasn’t well-versed enough on the past to know.

“I don’t have enough sense of modern political history to fully analyze–I don’t know enough honestly about the relationships between the particular governors and mayors,” Mr. de Blasio said at City Hall. “I’ve said many times, I’ve known the governor in all of 20 years–good working relationship and I think we’ve gotten a lot done.”

Mr. de Blasio, a Democrat like Mr. Cuomo, seemed to throw cold water on Mr. Cuomo’s assertion from earlier today, when he gushed at length about how close he and the mayor really are.

“You will never find a city and state government that work better together than these two governments will wind up working together,” Mr. Cuomo told reporters. “I think I have seen every city and state administration going back 40, 50 years and this will be the best relationship between a mayor and governor in modern political history when all is said and done.”

The two men have a complicated relationship. Despite professing his respect and admiration for Mr. Cuomo in public, Mr. de Blasio has been periodically frustrated by Mr. Cuomo’s attempts to block his progressive agenda.

In turn, the more centrist Mr. Cuomo has viewed the ambitious liberal mayor with skepticism. The Democrats collided on a variety of issues in 2014 and earlier this year, including funding for Mr. de Blasio’s universal prekindergarten expansion, affordable housing at Sunnyside Yards and how high New York City’s minimum wage should be.

On Wednesday, Mr. de Blasio will travel to Albany to lay out his agenda, detailing what funding he needs from the state. Many of Mr. de Blasio’s priorities are dependent on a receptive state legislature–and Mr. Cuomo.

“What’s clear to me is that we have a lot of areas where, if Albany supports us, we can get a lot more done,” Mr. de Blasio said. “If Albany doesn’t, it’s just that much harder.”