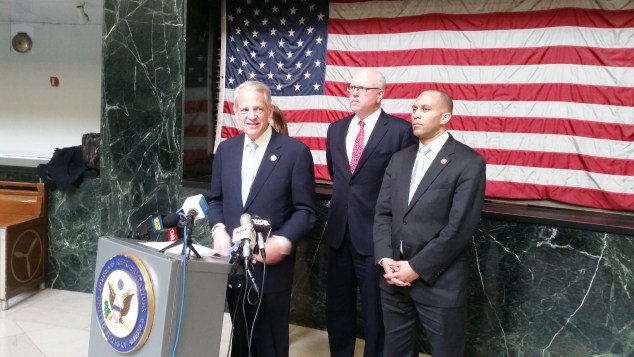 A group of House Democrats stood inside the LaGuardia Airport Marine Air Terminal today to blast Republicans in Congress for an impasse that may shut down the Department of Homeland Security at the end of the week.

House Republicans recently passed a DHS funding bill with immigration amendments that Democrats say are unacceptable. The GOP has a substantial majority in the House but a much weaker hold on the Senate, where the bill is currently held up. Democrats are demanding that a “clean” DHS bill, sans amendments, be passed in Congress to prevent DHS from running out of money Friday.

Republicans fumed about Mr. Obama’s move last year to shield millions of undocumented immigrants from deportation, calling it an executive overreach and promising to derail it any way they can. In an effort to break the gridlock, Republican Senate Majority Leader Mitch McConnell proposed a measure that would allow the Senate to register its disapproval by blocking the president’s actions on immigration in one bill, while approving the security money in another. Other options include passing a temporary measure to fund DHS for a month while Congress agrees on a spending bill.

But Democrats, including Mayor Bill de Blasio, are worried that funding could run out, furloughing DHS employees and potentially weakening the nation’s security. Terrorist threats to American malls over the weekend underscored their concern.

“We are a particular city of risk in our country. Since 9/11, we know that,” said Mr. Crowley, a Queens Democrat who represents the airport and surrounding neighborhoods in Congress. “Time is running out. It doesn’t have to–these man-made deadlines are what the American people are sick and tired of.”

Bemoaning Republicans in Congress has become something of a ritual for Tri-State Area Democrats frustrated in a body where they have little clout. Mr. Jeffries, a Brooklyn Democrat elected after the Democrats lost their majority in the House, blamed Republicans for blindly opposing Mr. Obama at every turn.

“These are the same people who believe President Obama first exceeded his authority in January of 2009, the moment that he took the oath of office–and they’ve been at it ever since,” Mr. Jeffries said. “The problem is, now is not the time for political gamesmanship when it’s been pointed out by my colleagues that terrorists around the world want to strike out at our homeland.”

Ms. Rice, a freshman Long Island Democrat and member of the House Committee on Homeland Security, said she was surprised a funding bill for DHS would even be debated. “It’s amazing to me that we are having this discussion here today,” she said.

“I am hoping that like-minded Republicans, because I know they exist in Washington, will stand up to the more extreme voices in their party and say enough is enough, let’s get this done,” Ms. Rice added. 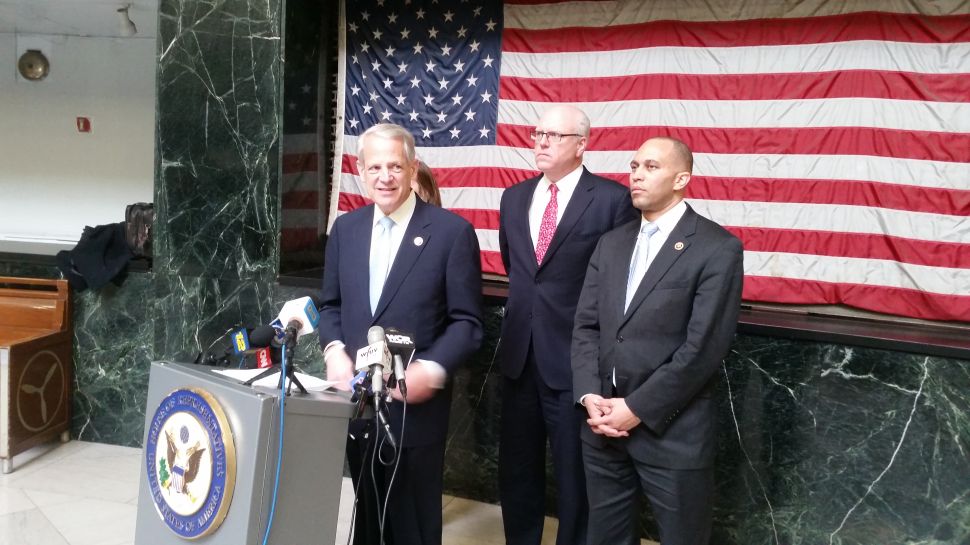