It’s a shame that disliking sports has passed from lame through cool back to lame again, at least in the circles I run in, because man, I really dislike sports. Downton Abbey, though? That’s something I’m willing to tailgate for. (Since there are no team colors per se, I’ll be painting my bare torso in the likeness of Lady Mary.) And if you’re into the game of love, this week’s episode was a veritable Super Bowl. So let’s consider each competitor to see who took home the trophy.

On paper, this pint-sized but passionate left-wing teacher looked like a sure thing. She reawoke Tom Branson to both his politics and his potential as a romantic partner after the death of his wife. She took a healthy interest in improving the lot of one of the downstairs servants (the extremely grateful Daisy) and in tweaking Lord Robert for his calcified ways, something many of the best characters, and people, on the show have done to great effect in the past. The problem is that she took that last bit way too far. Even if his lordship were worthy of all that invective, Tom isn’t it, nor, as he points out, are his late wife and his young daughter. Lord Robert loves all three — shouldn’t that be enough to earn him some forbearance from a woman who purports to love Tom in turn? She’s so off-base about this that when she asks Tom “Don’t you despise them?” she seems genuinely shocked that his answer is no. A nice lady, and on the side of the angels, but she doesn’t know Tom half as well as she thinks she does, so it’s hard to feel too bad about her departure from the field.

It’s not the first time I’ve said this, and it may not be the last: Lord Merton is much, much better at this game than Miss Bunting. Whereas she seems determined to make everyone uncomfortable lest her pursuit of Tom compromise her political ideals, Lord Merton approaches his courtship of Isobel Crawley with sensitivity and solicitousness. He shares her interest in medicine, her enthusiasm for positive change in society, and her ability to put others at ease when in their company, to the point where even his potential romantic rival Dr. Clarkson comes to like the man and his relationship with Isobel despite his own best interests. And that’s to say nothing of the prompting of the Dowager Countess, who’s initially so opposed to the potential match-up that she describes Lord Merton’s aristocratic background in terms even Miss Bunting might find extreme; she too is won over in the end. It doesn’t seem a romance for the ages, which on Downton makes it less likely to pan out. But however he does in the post-season, he played one hell of a game tonight.

Cousin Rose’s latest cross-cultural meet-cute happens in the rain, but it’s the prejudices of the past that really threaten to put a damper on it. When introduced by Rose to her White Russian refugees, this dashing young banker, who happens to be Jewish, finds himself on the receiving end of old-country hatred from that one exiled aristocrat who looks like a Russian Colonel Sanders. (He’s the same guy who blew a gasket at Miss Bunting a few episodes ago, though in that case he’s hardly alone.) But Rose’s shock at her guest’s anti-Semitism is wholly genuine: She really can’t understand why a person’s differences make them worth hating, and Atticus’s look of relief as he makes this discovery is winning and relatable. Rose has never been much of a character; she’s more a series of gestures in the direction of one, especially when contrasted with Lady Sybil, the character she replaced. But springboarding off her romance with the jazz singer Jack Ross last season and continuing to depict her as someone to whom a sense of social equality comes naturally, the way it does to many young people, brings her closer to that point than ever.

How can someone so right about so much go so wrong? The art expert who’s become besotted by Lady Cora Crawley makes all right moves—up to a point. He’s correct in saying that Cora is ignored and underappreciated, not just by Lord Robert but also, as Bricker unexpectedly and astutely points out, by the rest of her family. “When did someone last cherish you? When did someone even listen to you?” Good questions! The problem is that they apply to Bricker, too, who’s actively not listening to Cora when he asks them. She’d told him to leave her bedroom multiple times by then — once should have done it — and so when Lord Robert returns unexpectedly she’s earned her lack of guilt. But by parking himself in her room and goading Lord Robert into the sloppiest brawl this side of Mean Streets, he’s ironically created the conditions for her to be listened to even less by her husband. That’s rotten of Robert, but it’s Bricker who set it in motion.

PLAY OF THE GAME: MR. BLAKE

Now this is the kind of hustle I like to see out there. Seemingly aware that Lady Mary’s breakup with Lord Tony has not gone according to the gameplan, her ladyship’s cockiest suitor calls an audible. He ambushes both Mary and her former rival for Tony’s affections, Miss Lane Fox, at dinner, during which he calls on the latter to take Tony back despite having been jilted by him for Mary in the first place. The idea goes over so poorly it’s a marvel Miss Fox didn’t cook and eat Blake instead, but it was worth a shot. And it gave rise to a battle of cutting remarks that was at least as entertaining as watching Lord Robert tussle with Mr. Bricker. I have a feeling we’ll be seeing more of this kid, sports fans.

What’s that? He’s not courting anyone, you say? True enough. So let’s consider this a forecast for future games, or at least wishful thinking about them: When Tom told Lady Mary “You know you’re much nicer than a lot of people realize” as they discussed his pending decision about Miss Bunting, I got so excited about the idea that maybe the two of them would get together someday that I literally growled “C’mon, you sons of bitches!” at the screen. The moment Downton killed off both of their significant others, it created a vacuum that countless viewers, myself included, no doubt wanted them to mutually fill, but there’s been precious little sign that this would happen since. Moments like this keep my hope, and my ship, alive. What is it that sports fans say? Oh yeah: There’s always next year. 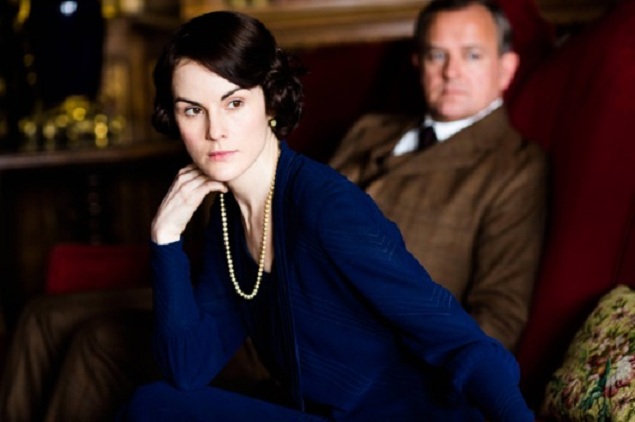