I’m convinced that this week’s Grey’s Anatomy was intentionally a bit of a -treading placeholder, so that the #TGIT focus would remain firmly on HTGAWM. Which isn’t to say it was a bad episode — the Shepherd/Edwards and Arizona/Dr. Geena Davis dynamics are far and away the best storylines of the season — but that it existed solely to move Dr. Geena Davis’s surgery from theoretical to immediate. We’ve got at least another week until we find out exactly what’s going to happen with this surgery, so it all feels a little anticlimactic right now.

And that’s all I’ll say about it, because I know you’re only interested in reading about that HTGAWM finale right now.

The mystery of who killed Lila Stangard was a whole lot less satisfying than, say, the mystery of who killed Laura Palmer. (If you’re following Drew and Vinnie’s recaps, you’ll be finding out the answer to that mystery very soon.) Part of this is because we never really got to know Lila. We see her in flashbacks, and we learn parts of her life from Rebecca and Sam and Griffin. But we never learn enough about her to see the real person beneath the sorority girl cliché. Are any of us supposed to feel particularly sad that she’s dead? She doesn’t feel like a person we’re mourning but a prop to incite the series of events that take place over the course of HTGAWM’s first season.

The other problem is that, if we don’t really care about Lila, we don’t really care about her murderer, either. Rebecca doesn’t think the murderer’s identity matters, telling Wes that maybe it’s her, or maybe it’s Sam, but who cares anyway? Annalise agrees, when she cradles Wes’s head on her lap and tells him to repeat over and over “Sam killed Lila,” because that’s the truth they’re choosing to believe. When the characters have so little investment in getting to the bottom of the crime, it’s hard for the audience to care, either.

(Sidenote: What is going on between Annalise and Wes? I feel like the positioning there was meant to seem maternal, but it also felt creepily, uncomfortably sexual. I am worried about Wes. I hope he’s okay next season.)

All that said, we finally have an answer to the Lila Stangard mystery, so let’s review what we know and what lingering questions remain:

Rebecca is innocent. A little manipulative, maybe, in trying to stir shit up between Griffin and Lila, and she really shouldn’t have given Rudy those drugs, but she’s not a murderer or a violent criminal. As annoying as she is as a character, her death brings no justice to this case.

Sam is technically not the murderer, but he’s hardly innocent. He arranged the murder, so were he alive, he’d still be going to jail. From the sound of his phone call, this was a plan he’d had in the works for quite some time, and none of Lila’s confessions of love will sway him from his plans. So he’s just as much of a jerk as we’d thought, and I’m not sorry that he’s dead.

Frank committed the murder. Not of his own volition; the Keatings clearly have a history of hiring him to do their dirty work. But it’s unclear whether he feels any remorse for his actions or how much of the plan was his idea.

Is Annalise innocent? On paper, yes, but I’m not convinced. When Sam makes the phone call, it’s unclear who’s on the other end. Did he actually call Frank himself? Or, knowing how close they are, did he ask Annalise to be the middleman, knowing that she could convince Frank (or another hitman friend of theirs?) to kill Lila? Once the episode ended and I was able to process those final ten minutes in full, I became pretty convinced that Annalise was in on the whole thing, even before the murder took place.

This is a half-baked theory, I know. The arguments and private conversations between Annalise and Sam during the first half of the season only make sense if they both assume that the other doesn’t know everything that they do. Then again, their marriage has a distinct Who’s Afraid of Virginia Woolf? vibe, and I wouldn’t be shocked if their mutual denial over what happened to Lila is their version of George and Martha’s made-up son. I’m curious to re-watch those scenes now, knowing more of the story, to see what subtext is actually playing out in the back-and-forth. Is their shared denial a way for them to cope with the trauma of having orchestrated a young woman’s death? Find out next fall!

Plus, the fact that Sam was dead all season means that we never really got to see him interact with Frank much. We know that there’s something fishy about Sam and Bonnie’s relationship, but Sam and Frank didn’t seem to have much of a relationship at all. Meanwhile, Annalise is asking Frank to arrange for Nate to be assaulted in prison, and that’s just in this week’s episode. Annalise keeps Frank around to do her dirty work, and while there’s still a lot we don’t know about their history, it’s clear that what history is there is the dark and twisted sort. We know the power Annalise has over Frank; there’s no evidence that Sam ever had that kind of authority. But Sam definitely knew that Annalise knows how to make messes disappear, so he asked her to do the hiring for him.

And what of Bonnie, the fan-favorite pick for Lila’s murderer? I don’t think she has anything to do with it, personally. I think she’s as in the dark as the Keating Five. Her only crime is having strange taste in men, which is definitely the least egregious crime anyone has committed on this show.

With the resolution of the Lila Stangard murder behind us, we can now devote season two to solving the mystery of who killed Rebecca Sutter. Maybe by the third season we’ll have left the tired dead girl trope behind? You’re really not going to do it better than Lynch and Frost did, guys. 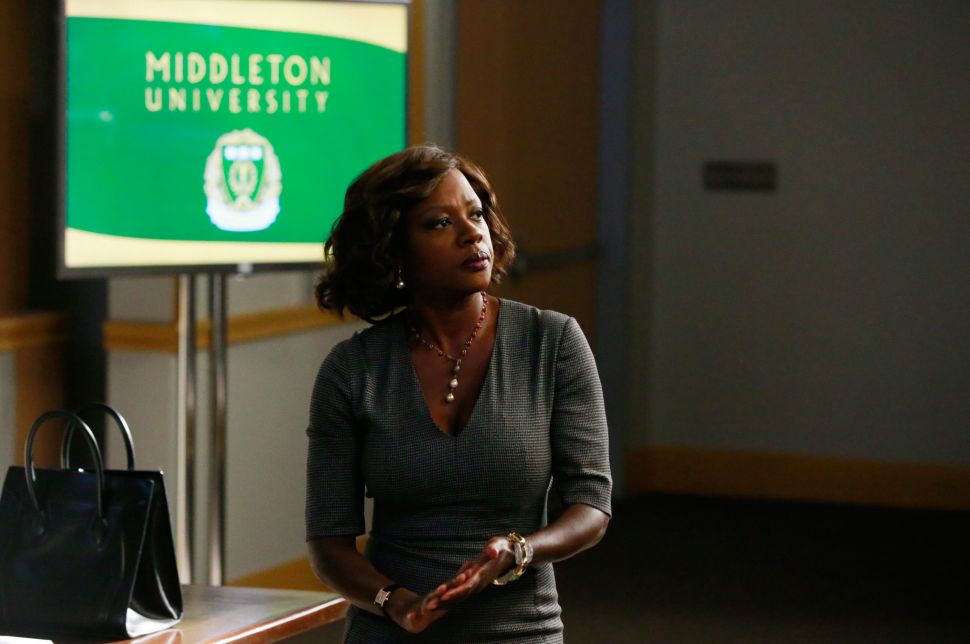 Filed Under: TV, TV, recap, Scandal, Grey's Anatomy, How to Get Away With Murder, Shonda Rhimes