A smorgasbord of pornography masquerading as violence, Everly is so repugnant and pointless there were times when I wanted to call for help. Scantily clad women being tortured by knives, electrical shocks, hot wires, whips, swords and painful sex is harder to take than most of the other garbage coming out of American films these days where overpaid hunks who can hardly make complete sentences beat the crap out of each other, but the denigration of women is all there is to this waste of celluloid. The salacious sadism in Everly is nothing more than Die Hard meets Victoria’s Secret. That is not a recommendation.

When first we see the star, beautiful and resourceful Salma Hayek, she’s a naked prostitute named Everly, covered with tattoos, crawling across a bathroom floor drenched in blood. Then she takes on the entire Japanese mafia for the next 92 minutes without ever leaving her apartment. Seems her boyfriend runs a gang that deals in human trafficking, sex slavery and gang rape. Tired of “The Life,” Everly has decided to turn the tables on the crime lords and turn over millions hidden under the floor to a cop who promised to get her into the Witness Protection Program, but it’s Christmas, see, and a gift-wrapped Christmas gift arrives containing his severed head. To save her mother from being murdered and protect her innocent 5-year-old daughter from being sold into a prostitution ring where pedophiles pay top dollar, Everly goes into action mode. The lethal slaughter that ensues would make a butcher retch.

Poor doomed Everly is shot, stabbed, sliced by a samurai sword and attacked from every angle by a parade of hoods and whores she dispatches so easily that even a rogue cop takes one look at the mounting corpses and mutters, “That’s a lotta dead whores.” Alleged screenwriter Yale Hannon liked the line so much that he repeats it several times, just in case you forgot to laugh the first time. Battered, bruised and bleeding from every orifice, the star is indestructible, deploying an arsenal of weapons to dispose of her endless attackers, including a bloodthirsty Doberman attack dog named Bonzai who tries to eat her baby daughter.

At one point, she throws a hand grenade into an elevator filled with assassins just as the doors are closing. Then she meets her ultimate challenge when a monster dressed in white called “The Sadist” shows up with a sinister medical bag similar to the one Jack the Ripper carried through the streets of Whitechapel. Mumbling in Japanese with English subtitles, he pulls out his toys—sulfuric acid, gasoline, sodium oxide—to a jaunty rendition of “Jingle Bells.” Let the tortures begin.

The movie, filmed by Joe Lynch for reasons that remain a mystery in Belgrade, Serbia, is beyond salvage but what is most unsettling is watching Salma Hayek suffer through it. She once played a memorable Frida Kahlo in the great art film Frida, and it’s sobering to see her sink so low. Worse still, so much of the torture takes place while her daughter looks on, clutching a teddy bear. I gave up when The Sadist poured a bottle of acid down her mother’s throat, but opened my eyes again as the camera panned across five floors of dead bodies while the sound track played “Silent Night.” I read one review that raved about her cheetah-print high heels. This is what we’ve come to.

Maybe Salma Hayek thinks she’s contributing to some sick, misbegotten notion of female empowerment or the idea that endangered sisterhood could do wonders with Uzies, but it all backfires in a noxious farrago of noise and non-existent narrative. Like riding a bike in a blizzard, I say don’t go out for this one if you don’t have to. 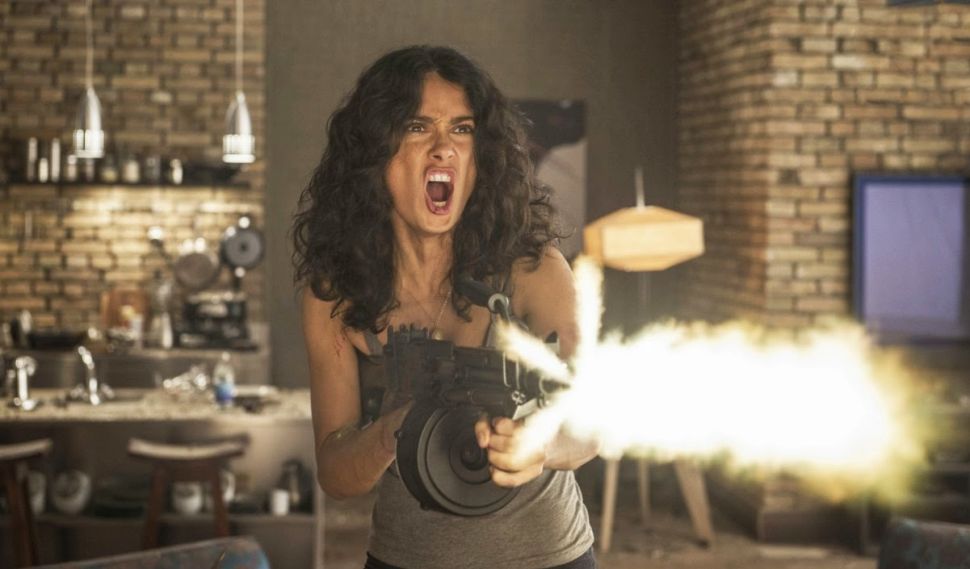