As Echosmith’s tour bus barrels through the Texas countryside, lead singer Sydney Sierota is reminiscing about how the band, made up of her and her three teenage siblings, was plucked from Los Angeles obscurity to become one of pop’s latest breakouts. “It’s pretty crazy to see what has happened,“ explained Sydney of Echosmith’s rise to popularity, thanks to their smash hit “Cool Kids.” “The fact that we are even on a tour bus right now is crazy. It’s been a little dream.”

Echosmith’s little dream started back when the family, including Sydney’s brothers Jamie, Noah and Graham, were growing up in Toluca Lake, Calif.—an upbringing that makes the the Sierotas seem a lot like a real life Partridge Family. “Our dad’s musical and our mom’s an artist, so that was helpful to our cause with wanting to pursue a career in music,” she explains of her creative parents, both of which are also on the bus today. “There wasn’t any conversation of, ‘Are you sure you want to leave school?’ We just made it work; it wasn’t even a question.”

Perhaps the reason why the Echosmith kids didn’t catch any flak from their parents was because the four kids are bursting with talent, with Sydney sounding more mature than her age would suggest (she’s 17 going on 18 in April). Starting out as one of the many cover bands on YouTube, Echosmith rose above both the rest of the Internet pack and the crowded Los Angeles music scene, eventually getting signed by Warner Bros. Records. “If anything, trying to make it in L.A. made it a little bit harder for us,” Sydney explains of succeeding in the entertainment capitol of the world. “A lot of bands who are from places like Wisconsin or Cleveland become stars regionally before breaking out. Here it’s much harder to become big, quote-unquote, because there are just so many acts trying to break through.”

When it comes to breaking through, Echosmith did so in a big way thanks to “Cool Kids,” an alt-pop empowerment anthem that also happens to be pretty damn catchy. The band, who writes all of their own music and penned “Cool Kids” way back in 2012, knew it was a special track right away. “We spent a lot of time on that song because we related to it,” explains Sydney of the song, which has the chorus, “I wish that I could be like the cool kids, ‘cause all the cool kids, they seem to fit in.” “It took at least a month after we initially put it together to edit the lyrics,” Sydney says. “It just meant so much to us, since we go through that and still go through that. We wanted to put a message across about accepting yourself and being O.K. with who you are.”

“Cool Kids,” however, was far from an instant hit. “We released it just before summer in 2013 for free online,” she explains. “It was definitely a slow burn. At first we were playing for 150 people at most and throughout the next couple of months it kept on growing and growing. Fortunately, we were on tour the entire time so we got to see the song’s evolution.” The success of “Cool Kids” continued to gain steam throughout 2013 and then 2014, becoming a hit not only in the United States but worldwide as well, which is largely due to to the strength of its lyrics coupled with a simple production. (“Cool Kids” was produced in part by Mike Elizondo, who got his start as the mastermind behind various radio rap hits including 50 Cent’s “In Da Club,” before transitioning to rock.)

Does Sydney think it’s ironic that the song about aspiring to be cool made the siblings cool themselves? “We still see ourselves as normal people,” she notes. “There’s of course going to be people who think we’re cool and we’re appreciative of that, but it’s definitely not getting to our heads. We still make fun of each other in a healthy and humble way … but it is nice to see that people look up to us.”

As Echosmith continues to tour around the country in support of their album Talking Dreams, which features “Cool Kids” as well as new single “Bright,” the Sierotas are aided by the fact that they can go through the ups and downs of fame together as a family. “We’re all super close,” Sydney explains as her bus continues to traverse Texas with her brothers and parents. “We’re there to help each other. Not many teenagers are doing this, so it’s nice to have someone on your team cheering you on.” 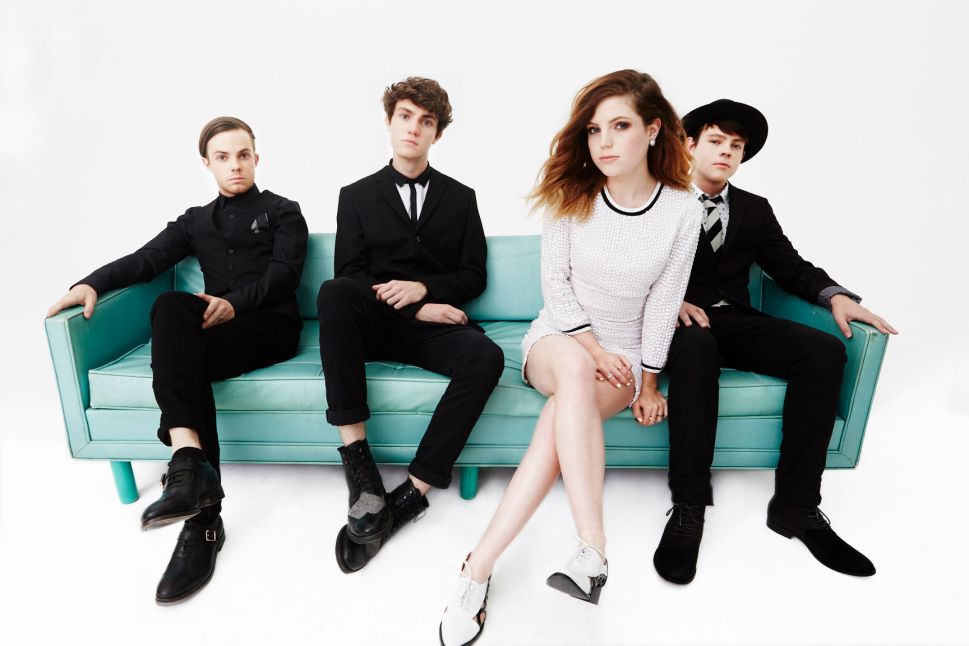