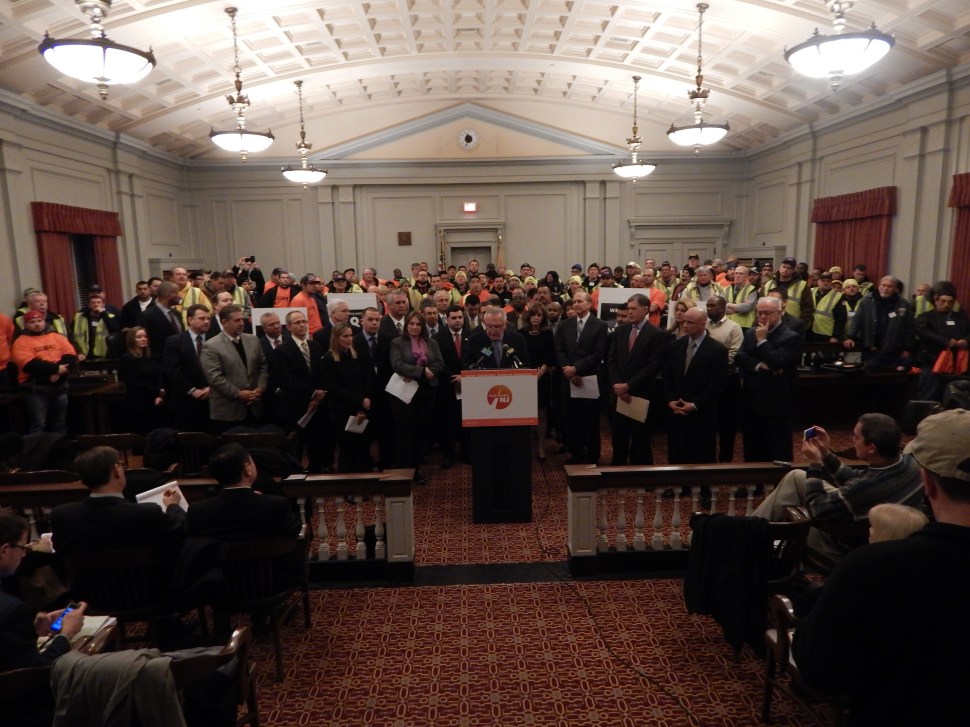 TRENTON — Flexing their political and labor support muscles in a jam-packed committee room up on the fourth floor of the statehouse annex here today, Forward NJ — the blue-ribbon coalition launched last year to advocate for the state’s ailing transportation system — offered a scathing appraisal of the progress the legislature and the governor’s administration is making toward fixing a depleted Transportation Trust Fund.

“For New Jersey to ignoring its unique strength as the epicenter of a wealthy, well-educated metropolis, as a gateway to international markets, and its location in close proximity to some of the nation’s greatest cities, is tantamount to something like committing economic suicide. Yet that is exactly what we’ve been doing for the more than 20 years of failing to responsibly pay for our transportation system,” said Raymond M. Pocino, Vice President and Eastern Regional Manager of the Laborers’ International Union of North America.

As PolitickerNJ has reported, debate surrounding state’s transportation infrastructure system has been at the forefront of discussions in Trenton in recent months, as legislators and the governor’s administration continue to mull options for replenishing the TTF. Many, including Forward NJ advocates, have warned that the fund could become insolvent by June, leaving the state no way to pay for the major transportation infrastructure improvements and projects they say are desperately needed.

“As you heard last week from Department of Transportation Commissioner Jamie Fox, he said negotiations are on the 10 yard line,” said Tom Bracken, chair of the organization, at today’s press conference. “The game is on the line and there’s no time left — kind of sounds like the Superbowl doesn’t it. I urge our elected officials in Trenton to take advantage of the broad, statewide bipartisan support on this issue and take action immediately. We do not want to be the Seattle Seahawks of state government.”

One of the possible routes legislators in Trenton are considering to get the TTF back on better financial footing is to implement a statewide gas tax, falling either on all petroleum coming into the state or on consumers at the pump. But Republicans and Democrats seem split over support for that option. While Democrats have largely promoted a gas tax as a sensible and much-needed revenue enhancer as the state struggles to cover its obligations, their Republican counterparts have wavered — though sources say party leaders could solve that impasse by exchanging a gas tax for an elimination of the state’ estate tax, sought by Gov. Chris Christie and others.

The divide was encapsulated at a League of Municipalities meeting last week, where Senate President Steve Sweeney (D-3), warned that “partisanship” would get in the way of finding a funding solution.

“It is a win-win situation for everyone to reauthorize the Transportation Trust Fund, but last Wednesday in this very building the legislative leaders were there, and leaders of both sides of the aisle couldn’t wait to take things off the table,” shouted Bill Dressel, Executive Director and chief lobbyist for the New Jersey State League of Municipalities.

Surrounded by members of LIUNA as well as the International Union of Operating Engineers who had moments before poured in off the street and crowded into the cramped room, Dressel and other Forward NJ representatives — from a host of organizations across the state, including regional chambers of commerce, contractors associations, labor unions, and former state transportation commissioners —  scoffed at the suggestions of some lawmakers to re-allocate money in the state’s budget from other areas to pay for the fund. Dressel said there “is a nexus” between a gas tax and consumers in the state, that there’s no room to pull from other places, and that the money should come from a new tax.

“The people who use the roads should pay for the gasoline tax. It’s a user tax, in essence,” he said.

But asked by reporters if the coalition supported a Democrat-sponsored bill currently under consideration in the legislature that would install a gas tax of 25 cents at pumps across the state — a cent more than the 24 cents experts say is needed to raise the funds required to anchor a $1.6 billion to $2 billion per year state transportation funding program — Bracken waffled slightly, maintaining that “everything was on the table.” He wouldn’t outright support the legislation, but said a gas tax will likely be an important part of the final solution.

“This is a very, very important issue to the state of New Jersey when you can bring this many people to unite with one voice on one issue,” said Bracken, who called Forward NJ the “broadest, most diverse coalition” he’s ever seen in the state.

More than a dozen speakers were present at the press conference to urge lawmakers to action on the issue.

“To our current elected officials, I acknowledge that you alone didn’t create this dire situation with our transportation trust fund, but no one but you alone can fix it.  This needs to be a bipartisan effort, 100% participation, no politicking, no grandstanding, just governing,” Pocino said. 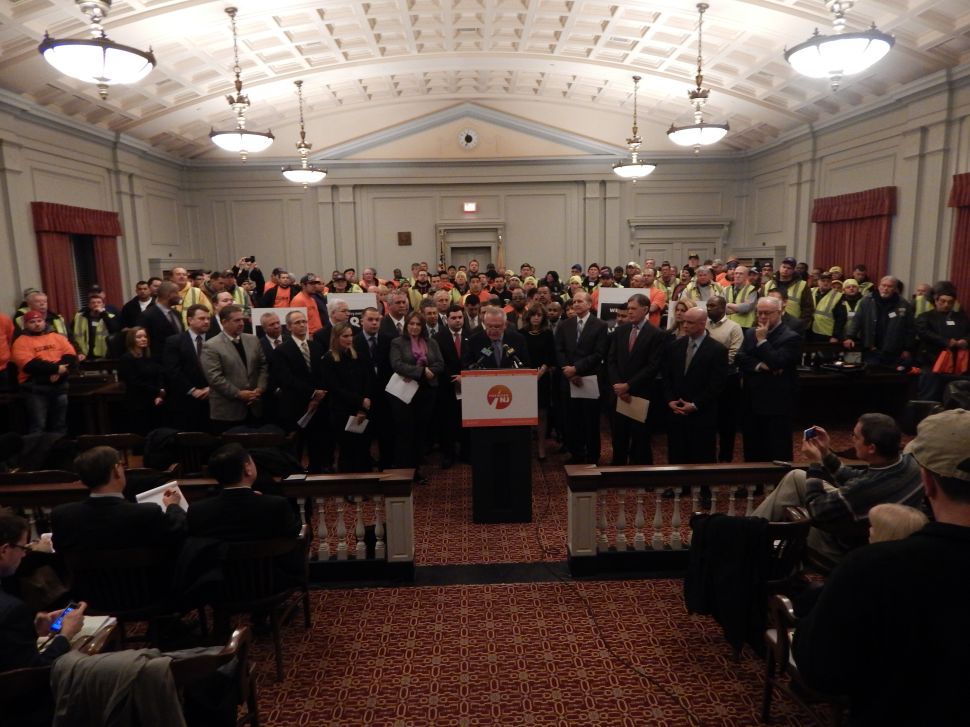