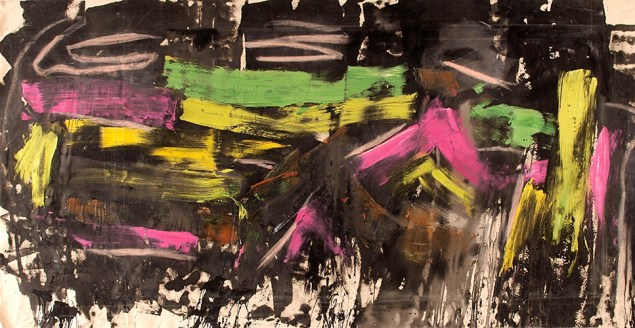 I do like an artist who evolves. Some artists who evolve don’t improve upon their earlier work, but that’s the risk they have to take—and I salute those who take it.

In that category, at Walter Wickiser Gallery in Chelsea we have “Francine Tint: Echo and Shadow,” up through February 25. Technically, this is only half of a two-person show, but Ms. Tint’s 14 paintings—ranging in size from small to large, and all pure abstractions—occupy the large central space in this gallery and the larger of its two side spaces. 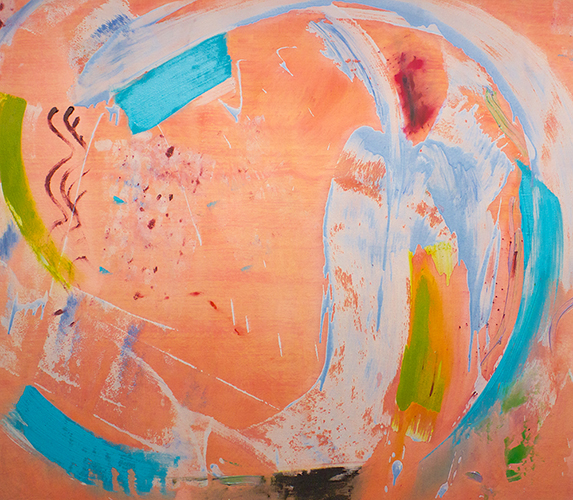 She deserves the real estate she’s given here on the grounds of art-world longevity alone, although there are aesthetic reasons to be very enthusiastic about almost everything in this show. But if ever there was an artist who has paid her dues, that is Francine Tint.

A native of Brooklyn, she has studied at not one but three art schools—the Brooklyn Museum School, Pratt Institute, and the New York Studio School of Drawing, Painting and Sculpture in Manhattan. Since the turn of the century alone, she has had 10 solo exhibitions, four of them in New York, and participated in 20 group exhibitions, twelve in New York. During that same period, her work has been seen in art fairs from Southampton to San Francisco. Nor is she a stranger to her fellow artists, getting around to more openings than you can keep track of: her smiling face adorns any number of festive photos on Facebook.

I have thought highly of the pioneer Abstractionist’s work for years, but was accustomed to thinking of it in terms of long, languorous sweeps of gel-raised and luscious but closely-valued colors—kind of an august Jules Olitskian Götterdämmerung. But there is little if anything like that here.

In brief, Ms. Tint, well into her career, has been experimenting. She has been working long and hard to differentiate her work from its former context and time frame, doing her best to drag her own unique brand of Color Field painting, more than three decades after she first premiered it, kicking and screaming into the 21st century.

But this new body of work is a change. To begin with, it’s not as leisured, swooping and voluptuous as of old. Brushwork is now much more agitated, flustered, vehement, and even aggressive, with short, sharp, staccato bursts of color. One way or another, the impression conveyed is of a lot of action—more action, in fact, than some of the canvases of those earlier Abstract Expressionists officially known as “action painters.”

There’s lots less gel (though with a few grace notes of it), lots more scrubbing and scraping of the paint, lots more curved or straight sweeps of it, brusquely abbreviated. More pictures have matte surfaces; almost none have glossy ones. Colors are brighter, with much more vigorous color contrasts, and Ms. Tint has taken to emulating Manet, Goya and Velázquez in using black as a color more often. But in one case, she works with a mostly white field, as did Helen Frankenthaler in the ’60s—but, if only because Ms. Tint is stroking the paint onto her canvas instead of staining it in, the two artists’ pictures don’t further resemble each other.

In the ’70s, Frankenthaler also drew a lot of lines upon her canvases. I never felt they worked very well for her, but now Ms. Tint is using a lot of lines (usually black) and they mostly come off much better. One reason may be because her lines are more emphatic, more confident. For whatever reason, they operate as independent entities, sitting on the surface of the field of paint. In the process, they establish a figure-ground relationship (whatever happened to Greenbergian “flatness”?).

Furthermore, when the field underneath such lines contains a lot of blue and/or green, the painting takes on the appearance of an underwater panorama, its blues and greens sinking tumultuously into a still totally abstract space suggestive of water. Lovely.