Talk about bad timing. Diluting the splendid, well-deserved triumph of winning an Oscar for her sensitive, nuanced portrayal of a mature woman facing life’s greatest dilemma in Still Alice, Julianne Moore now returns in a trash wallow called Maps to the Stars. She’s the best thing in this toxic carnage of creepy, self-indulgent decadence, but under the direction of loopy Canadian David Cronenberg, she goes beyond the limit of acceptable artistry. She even plays one entire, seemingly interminable scene on the toilet, her colon blocked by her Vicodin addiction, with all the accompanying bathroom sound effects you can imagine. She’s a fearless actress, but she won’t be winning any prizes for passing gas.

She plays an aging, traumatized Hollywood has-been named Havana Segrand (where do they come up with these monikers?) who longs to make a comeback in a remake of a film that once starred her mother, an actress named Clarice Taggart, who burned to death in a fire but now turns up occasionally as a ghost to ridicule her daughter’s ambitions. Havana’s analyst and self-help coach is Dr. Stafford Weiss (John Cusack), a TV psychologist and best-selling celebrity guru with an obnoxious 13-year-old movie star son named Benjie (Evan Bird), a Justin Bieber clone whose career is managed by his neurotic mother (Olivia Williams). Benjie, who is in the midst of filming a sequel to his own famous teenage cult movie called Bad Babysitter, has been in and out of rehab since he was nine, but he’s far from being the most dysfunctional member of his demented royal family (by Hollywood definition).

That honor goes to his sister Agatha (Mia Wasikowska), who arrives by bus covered with burn scars, fresh from years in a mental asylum in Florida. Agatha hires a limousine to drive her to Beverly Hills (rich enough for a limo but traveling by Greyhound? Never mind. If you start asking questions about logic, you’ll be here all day) chauffeured by Jerome Fontana (Robert Pattinson, trying to escape the casting-coach yoke of playing vampires), asking about maps to A-list celebrity homes—particularly teen icon Benjie, who is really the brother she tried to murder years ago.

Jerome warns against wasting money on star maps (“Not much point, unless you want to see where Ryan Seacrest used to live”). Eventually the stories connect through Jerome’s clients, including the suicidal, drug-addicted Havana, Agatha’s father the shrink, and Agatha’s Twitter friendship with Carrie Fisher. (Now there’s a link to sanity, if you ask an insider.) Agatha and Benjie are totally nuts, and why wouldn’t they be, after discovering their parents are brother and sister? But what do Agatha’s burn scars have to do with the fiery death of Havana’s mother? Don’t ask me to give away everything. Somebody might be unwired enough to actually see this thing.

Mr. Cronenberg’s reputation for daring defeats him here. Except for its view of today’s special breed of bogus celebrities with too much money and no real talent, Maps to the Stars has plenty of name-dropping, sex orgies, cult therapists and contrived eccentrics (including one star on an ego trip who sells his own excrement) but not one scene that shows the work people in the film industry actually do to make motion pictures. With its muddled plot twists, ridiculous dialogue (by Bruce Wagner), easy targets (Scientology is always good) and preposterous view of La La Land, Maps to the Stars is part satire, part soap opera, part ghost story, and totally moronic. 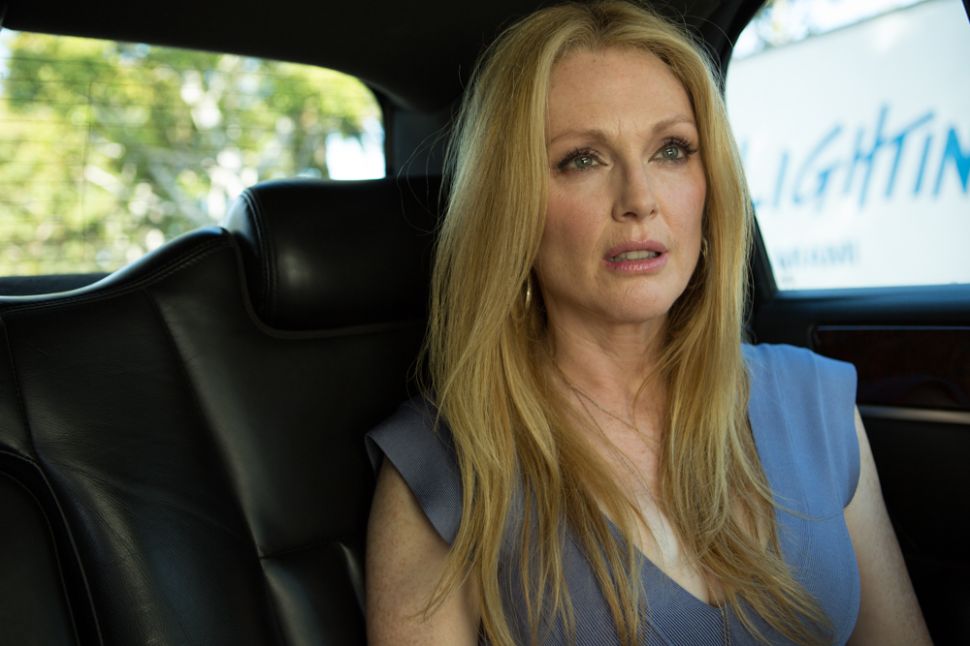