Another Hugh Grant comedy that follows the dots without much wit, The Rewrite casts him as a has-been Hollywood screenwriter whose career has gone dormant, reduced to the humiliating predicament of peddling ideas to the sort of young, clueless studio moguls who run the movie business today. The opening scene shows him pitching a comedy about Jack Nicholson faking his own funeral to see what people think about him. Hardly a funny idea, but for once, the two execs agree. “We’re looking for edgy comedies with a Kick-Ass-type woman,” they suggest with creepy enthusiasm, describing half of the junk I sit through every week.

The only offer his agent can find him is a job teaching a college screenwriting seminar 2,754 miles from Hollywood in Binghamton, N.Y., a burg which looks deplorable and dire, where a big night on the town is dinner at Wendy’s. Although he’s welcomed with open arms by the chairman of the English department (J. K. Simmons, as a cheerful, smiley-face counterpart to the sadistic bullies he usually plays), he immediately breaks the rules by dismissing his class for a month, lying about his next project starring Matt Damon, sleeping with one of his students, and alienating everyone on campus, most of all a starchy, implacable feminist (Allison Janney) who is the world’s leading scholarly authority on Jane Austen as well as the head of the ethics committee, who has the power to get him fired. War is declared on the first day. Battered and beaten, he soon throws in the towel and heads back to L.A. where he has a change of heart and returns so broke he has to travel by Greyhound bus. Hugh Grant is getting a bit too long in the teeth to rely on feckless, winking charm as a serious acting style.

Written and directed by the same Marc Lawrence who guided him through three previous movie flops, this dumb movie turns from dubious to preposterous when the disgraced writer decides to take academia seriously, redeem himself and get his job back, selling one bespectacled nerd’s screenplay to Hollywood, melting his frosty, conservative, man-hating arch nemesis with the tempting idea of turning her life story into a movie starring Meryl Streep, solving the problems of students who consider Steven Spielberg and George Clooney the gods of our time, falling in love with a struggling single mother (Marisa Tomei) with two kids because of her waitress uniform, and saying impossible and embarrassing lines like “I’ve always had a yen for uniforms—I think Kim Jong-un looks pretty sexy.” I wonder what he’d think about a movie critic dressed like a security guard. 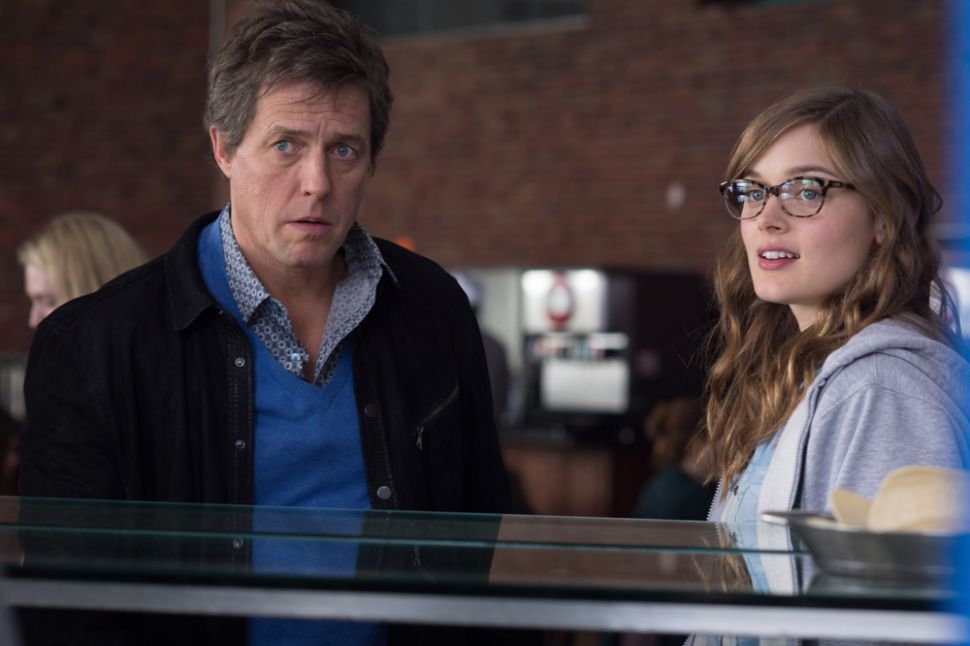