When artist Mikel Glass became fed up with the market’s dependence on art fairs about five years ago, he did as many meta-inclined mischief-making artists have done before him: he started exploring the mechanics of selling work at an art fair in his own work. In 2012, he created an installation at (Art) Amalgamated called FAIR that explored, well, fairs. And then he alluded to collectors buying art from booths somewhat more obliquely with an installation at the Governor’s Island Art Fair, in 2011, in which a gerbil runs through an endlessly looping sequence of tubes.

Finally, in 2013, Mr. Glass and his former partner, Jen Wallace, decided to take the semi-logical next step in their exploration, and create an actual functioning art fair of sorts a few blocks away from The Armory Show and call it THE(UN)FAIR. It was a hit, and art critics—the only people who perhaps loathe art fairs as much as artists—applauded the heavy-handed cynicism of the title, the easy irony of a subversive anti-fair, and the plentiful sweet frozen treats.

The name was catchy, sure, but after Ms. Wallace and Mr. Glass split before this year’s edition, Mr. Glass decided to go in a new direction, and a get new moniker.

“It was time for a name change, because everything was associating ‘unfair’ as an adjective, and it was the wrong message, so we’ve done this name change as THE(un)SCENE,” Mr. Glass said. “Which has basically the sentiments as THE(UN)FAIR did without the negative connotation.”

The first edition of THE(un)SCENE Art Show will be up and running in a 9,000-square-foot space at 549 W. 52nd Street (just a block from The Armory Show) from March 4 to March 8 (the same dates as The Armory Show). And Mr. Glass is quick to note that despite the self-critical nature of the thing, the works are very much for sale.

“We’re not anti-commerce,” he said. “We consider ourselves a hybrid.”

Around 90 artists will have their work on display, but perhaps the most intriguing component is the performance by cyborg activist Neil Harbisson: he will strap on a device he calls an “eyeborg,” walk around The Armory Show, and transmit the results back to THE(un)SCENE. Eunjin Kim, Walter Robinson and Heather Merkle are among the other artists in the exhibition.

“Everyone is welcome.” he said—and with the free ice cream back for another year, attracting a crowd probably won’t be a problem.

“It’s ironic again, the title, because it will become its own scene,” Mr. Glass said, grappling with the competing forces of irony and sincerity, of art and commerce. “But the idea is that when I think of the word ‘scene’ as it pertains to the Chelsea dynamic of the art world, I think of a hipster leaning against a painting drinking a Pabst Blue Ribbon in a crowded gallery—not looking at the art, instead hanging out with people.”

“That’s what I think of the word ‘scene,'” he continued. “It has a negative connotation today, and that’s why I want to be the opposite of that.” 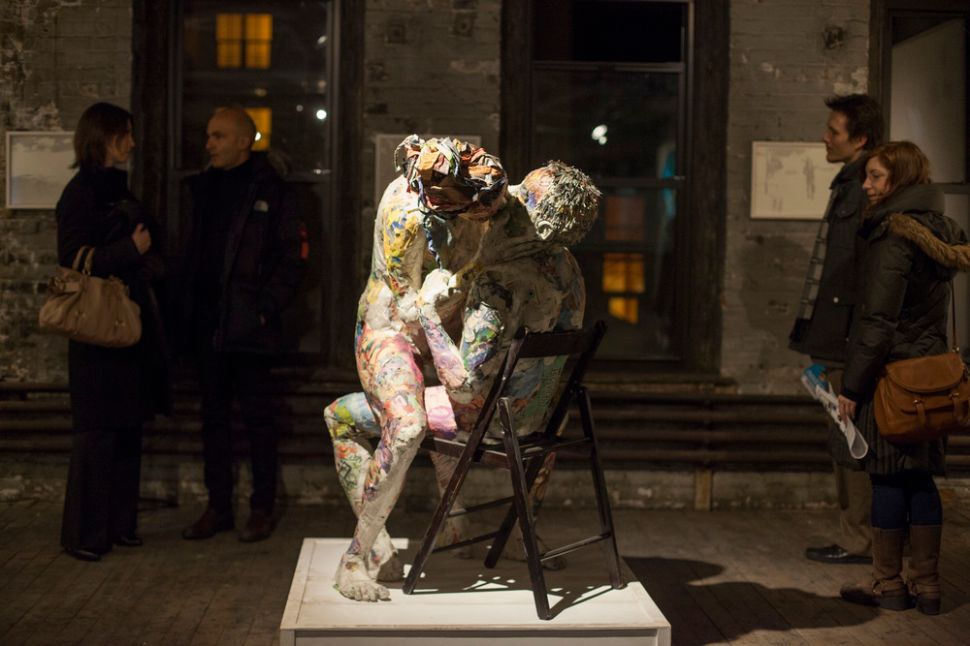