There are five things I know to be true:

Now, I’m the only one in The Colony who can learn the truth about the Before Time. And I am going to do my best to understand, using old video technology and a copy of NBC’s documentary, The Slap.

The video record opens and a man with a beard is running on track that allows him to go nowhere and lifting metal bars up and down for no purpose. Surely the Totalitarian government has punished him to do menial physical torture – why else would he waste his efforts on such meaningless exertion?

And yet, for a political prisoner, he wears tunics made of a lavish material that are shiny and soft, and his wife enjoys Nutrition that almost looks like it might be real fruit. They are surely richer than everyone in my Colony put together, and yet they seem upset.  No one in the Before Time ever smiles, or seems to enjoy their astonishing riches.

His Child plays chess on a flat screen with a kid from “Utah,” which I assume is the name for another Colony. I empathize with this Child. My father also taught me to play chess, before he died.

A disembodied voice, which I can only assume belongs to the Colony Leader, tells us that this man is Harry. According the voice, he is also the first person in his family to become rich, which he seems to have done not by excelling at The Test (this is before The Test, I remind myself) but by selling the small, fast metal boxes that people used to crash along the streets.

Next, we meet a new family, led by a man named Hector. “Why are we giving our kids all of this sugar?” he asks. Why indeed? Sugar is a precious and valuable resource. I had one cube once when I was seven and I shall never forget its sweet, saccharine slick on my tongue.

A jazzy break in the image comes and names flash onto the screen, strange, foreign names like “Thandie Newman” and “Zachary Quinto.”  Their first names sound silly and unnatural and I wonder why their parents couldn’t have given them ordinary names, like Ermias or Sulta, or Callista. They told us the Before Time was strange… now I believe it.

Several elements of the first man Harry’s life are introduced very rapidly. One of his Laborers is stealing “bucks” from him, and Harry insists he works for free until he pays it back. Harry lowers his eyebrows menacingly.

Then, he meets with a Legal at lunch. He is concerned about having hit a Child at something called a “barbecue,” which he fears might yield punishment from the Council of Elders. The Legal doesn’t seem worried; he is a glutton and a clown who does not occupy himself with Harry’s realistic fears about the Totalitarian government. Harry lowers his eyebrows even more menacingly.

Finally, we see Harry’s son playing a game like Slateball (but without the SlateBoards) in colorful red and yellow tunics without sleeves. The Child throws the ball to a Child for a SlateDunk instead of SlateDunking the ball himself. This makes Harry very angry and he lowers his eyebrows the most menacingly of all.

I have to wonder why so much attention has been given to this man Harry at all, who seems to be distinctly unhappy, and of no vast importance to Colony workings. Neither his wealth nor beautiful wife nor intelligent Child brings him any joy. So what is the purpose of documenting life in such detail?

The man goes on to hurt his beautiful wife, and kiss another woman who is not his wife, two high Colony crimes, and he seems unremorseful at the hitting of the strange couple’s Child. This man is bad but he still gets to be rich. Finally I understand why The Test is so important. We need an infallible Totalitarian government to observe all of our actions and reward our behavior with our proper place in society.  Without it, men like Harry are free to grunt and scowl without having to do any Labor for Society.

I had assumed that he had hurt an Elder’s Child, or a wealthy one at that. And yet, when Harry goes to the parent’s apartment to apologize for the incident, they do not live in nearly as much luxury as he.

“You’re going to jail,” says the monstrous Child, and once again I assume that he has the power of the Elders behind him. And yet… it seems they are poor Laborers, and Harry is rich. Perhaps this is the cause of the vitriolic hatred towards one another but it seems a cheap explanation.

They told us there were no Categories in the Before Time, and I had always thought what our Categories shouldn’t define us. And yet it seems that Categories are the only things of concern to the video makers! These men and women act as hollow caricatures of how each Category is thought to behave, but with no Totalitarian government forcing them into their roles, I can only assume the video makers are attempting to make some sort of obvious, over-explicated point.

When Harry finally goes before the Elder in the Justice building about his crime, the Elder seems unimpressed with the charge and uninterested in addressing it.  Harry vows to fight, and punish the man and woman whose Child he hurt to serve as a good example to his son.

Much about the Before Time still confuses me: why does every man love a woman who is not his wife when the wives are absurdly beautiful and sympathetic, almost to the point where they don’t seem fleshed out as people? Why is the poor couple so intent on putting Harry in jail? Do they not know the crimes and tortures the Government bequeaths within its walls?

These are all selfish and indulgent people, unaware of their bountiful resources and freedoms. I can only imagine the type of world in which these people are worthy of commanding the attention of a National audience.

Valentine Neverwoods is about to turn 17 and face The Test that will determine her future. Read more at @DystopianYA. Dana Schwartz is a writer and comedian from Chicago, IL. You can follow her on Twitter at @DanaSchwartzzz. 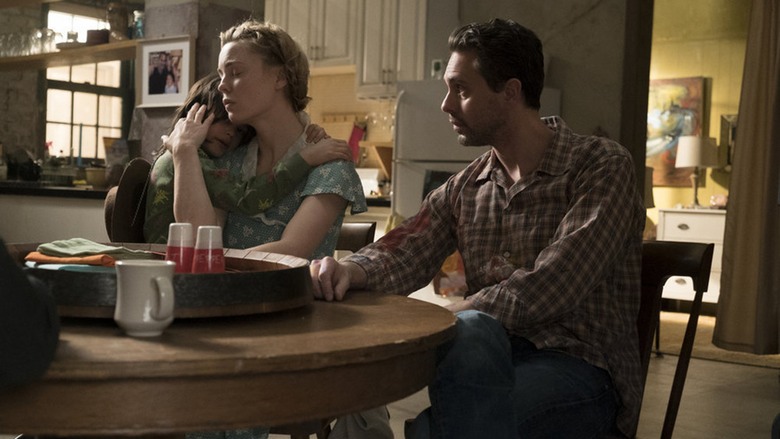