The court officer didn’t really reach for his gun. But in my imagination he did; and he might have if I hadn’t shut up, gathered my papers, and made a head-feint suggesting I was exiting the courtroom. He did rise from his chair and interrupt me in mid-sentence, saying loudly to the judge, “We’re all done here, right your honor?”

I turned to look at the magistrate and she gently – resignedly – answered my question: “You’d have to have an administrative hearing before the state agency. I can’t order them to give her a full and accurate accounting.”

I had just won my case. And the common sense rule of salesmanship – once you’ve got the order, stay silent – makes sense in the courtroom as well. But I wasn’t asking for something more for my client; I was asking the court to help my opponent: my client’s ex-wife.

We were in Family Court because my client—whom I represented pro bono—is a Marine sergeant stationed thousands of miles away. His child support payments, which were automatically deducted from his paycheck and forwarded to the mother by New York State, had gotten screwed up. The State agency responsible had ignored the magistrate’s earlier order to reduce his payments, and instead had seized and emptied his bank accounts and tax refunds. He was dead broke.

The Marine Corps had approved the sergeant’s request for pro-bono civilian representation, and I spent months trying to get the New York State Child Support Processing Center to give us a complete and accurate accounting. Finally, a senior lawyer at the Center “got it” and found someone to conduct this mini-audit. She sent me an email documenting the sad fact that the agency’s seizure of the sergeant’s money was wrong; he was owed a refund.

Except, the lawyer noted, the agency couldn’t issue a refund; any adjustment had to be ordered by the court. And even then, he wouldn’t get his money back. He would only be entitled to small monthly credit against his child care obligations. Rebuilding his savings would take years.

When I presented the evidence to the magistrate, she looked at the ex-wife sitting at the other end of the counsel table and asked her, “Do you want to contest this?”

“Oh no, your honor. The Child Support people have screwed this up since the beginning.”

Knowing I wasn’t going to get what I wanted, I still said, “Your honor, I think the agency should issue my client a refund. They should be held accountable. Ms. Diaz here (not her real name) did nothing wrong. She shouldn’t have to pay for their mistakes.”

The judge looked perplexed. “Go off and work out a plan to reduce his support payments. Just tell my court officer when you’re ready.”

It took Ms. Diaz and me more time to find a place where we could spread out the various documents than it did to come to a plan we both thought fair. There wasn’t a single table in the courthouse and more than half the chairs in the dingy waiting room were broken; people lined the hallways. We navigated un-shoveled sidewalks outside the courthouse and crossed the highway to a Starbucks. It was there that I saw the papers that would get me in hot with the court officer.

As Ms. Diaz and I compared figures of what had been taken from her ex-husband and what had been paid to her, it was clear that they didn’t match. Moreover, the judge’s explanation of the agency’s nearly indecipherable accounting didn’t jibe with the checks the agency had sent this mother for her kids. Ms. Diaz also told me that her experience dealing with the so-called customer service representative at the agency was as unsatisfactory as was her ex-husband’s and mine. And she was supposedly the party whose interests the agency was supposed to protect.

The agency doesn’t have an ombudsman. But more importantly, we agreed that it had no accountability.

We trudged back to the courthouse and once again went before the judge. We presented our calculations and the agreed-upon plan. The judge clicked through some information on her computer screen and looked up confused. “The Agency now says it only owes Sergeant Diaz $1200.” We had only been gone an hour, and somehow 75% of the poor father’s “credit” had disappeared.

“No, your honor; here are their figures,” I said.

“Do you agree with this?” The judge asked Ms. Diaz.

“You really don’t have to consent to this,” the judge told her.

“The money was taken from him improperly, and the support payments are fair,” said Ms. Diaz, herself a former Marine.

“Then so ordered,” said the judge.

It was then that I pushed my luck. “Your honor, I know I can’t represent Ms. Diaz, but I think you should order the New York State Child Support Processing Center to provide Ms. Diaz with a full, accurate, and understandable accounting.”

Escorted out by the court officer, Ms. Diaz and I looked at the various print-outs one last time. Did they make sense? No. Was it pretty close to what she was supposed to get in child support? Yes.

We shook hands and said goodbye. “I only want what’s fair,” she reiterated.

Thank God for the Marines. 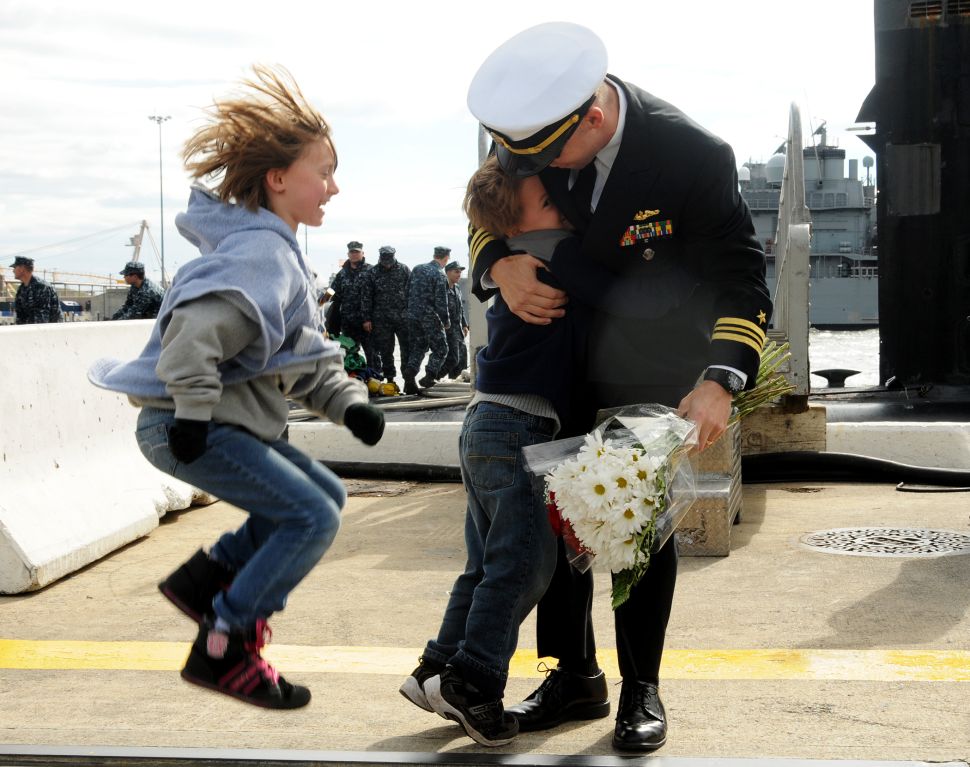