If one was to go back and read my Gotham recaps for the last, say, five weeks, one would get the impression that I hate Gotham so much. But it’s not true! I love Gotham. I look forward to watching Gotham. I suggest that people watch Gotham. Yes, sometimes Gotham is really, really stupid and must be called out as such, because it is my job to do so. But  I try and watch shows as both a critic that nitpicks everything AND a fan that just enjoys it for what it is, and never the twain shall meet.

But watching ‘The Blind Fortune Teller,’ the twain met, and the twain fucking hated it.

Listen, separating Gotham the TV show from the comic book mythology is a hard thing to do. Tell me all you want that Gotham isn’t a Batman show, it’s still a Batman show. But I understand it will deviate slightly, and that’s okay! Keep it interesting! But if you’re going to deviate, Gotham, can you at least, I don’t know, put some effort into it?

Right now, there’s no definitive proof that Jerome is actually a younger Joker. But let’s say he is, and we did actually just see some of the laziest interpretations of a major character I have ever seen. Why is he the Joker? Because he…laughs a lot? References a rimshot? Because Cameron Monaghan can do a sub-par Heath Ledger impression? Gotham plans to just lay this out in front of you and expect you to be satisfied. Let’s take the broadest of the broad look at arguably the most important villain in comic books, invest less time on him than we did on THE BALLOONMAN, throw him into a run-of-the-mill murder plot, and call it a day. Why does this kid act like the Joker? Because he’s cuhraaaazy, just like every other villain ever, according to Gotham. Why is he crazy? Because he just is! Look, audience, it’s that character you know! Isn’t this cool?

The point of the Joker’s backstory is that he has no backstory. As Alan Moore’s Joker so famously put it, “if I’m going to have a past, I prefer it to be multiple choice!” But if you really have to give him a definitive past, Gotham, because you are basically fucking Muppet Babies with Batman villains now, at least try and be unique? Because as we stand right now, the Joker was always just the Joker. All he gained was some face paint, a purple suit, and a fancy name. Batman’s greatest foe came to be because that foe had to listen to his mom bang a clown when he was fifteen. Hopefully, this is just the beginning of that whole “possible Joker every week” thing that turned out to just blatantly not be true.

This wouldn’t be the end of the world if the rest of the episode made any sense. But it didn’t. The murder plot is solved because the titular fortune teller, played dutifully by Mark Margolis, was only pretending to be psychic. He is actually Jerome’s father, helping to cover up a murder. Jim puts this together by connecting so many ridiculous dots with his crazy detective brain. All the while, Leslie Thompkins goes from charmingly interested to aggressively annoying.

Barbara is back, and she wants Jim back, too. Luckily, she has baby Catwoman and baby Poison Ivy to help her with relationship advice, and…you know what? This whole thing is just so stupid. She ends up seeing Leslie and Jim making out, because literally anyone can walk into the GCPD Men’s Locker Room.

Fish Mooney is somehow still the supreme ruler of all these much larger, much more muscular prisoners. She does give good rallying speeches, I guess. She puts her plan into action, which amounts to “Give us what we want, or we’ll keep beating ourselves to death.” That’s a sound plan, Fish, until everyone in your not-that-large group has already beaten themselves to death. Seriously, though, can someone just say the name of the prison Fish is probably in so I can use all these Bane GIFs I have saved up.

Like I said, even in the worst of times, Gotham has at least one entertaining thing going for it. This week, I found it truly, incredibly funny that Jim wasn’t motivated by justice. He wasn’t motivated by a desire to clean up the system. He was motivated because he really wanted to get all this shit over with so he can finally get laid.

As always, let’s run down every reference, fact, and nugget of Bat-history brought up in episode sixteen,“The Blind Fortune Teller.”

Haly’s Circus, The Flying Graysons, and the Lloyds 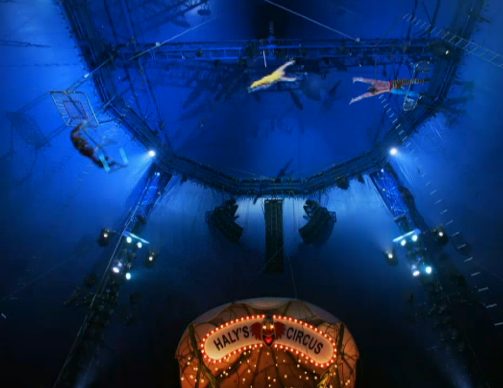 Remember at the end of this episode, when John Grayson and Mary Lloyd, two members of the feuding circus families, are in love again with basically zero explanation? And they tell Gordon that if they have a son, they will name that son after Gordon? Well, in the future, they do have a son but they don’t name him Gordon. They name him Richard. His friends will call him Dick. And Dick will also be a Flying Grayson, performing circus acrobatics  with his family. That is, until Haly’s Circus returns to Gotham many years later, and both Dick’s parents die horribly in front of him in a not-so-accidental accident.

Luckily for Dick, he’ll soon be adopted by a billionaire, a billionaire by the name of Bruce Wayne. After much snooping and secret-spilling, Dick Grayson will become the very first Robin. And if you think watching your circus parents die is horrible, just know that Robins tend to have a bloody track record that includes being beaten to death with a crowbar and impaled by your own clone. Dick, all things considered, gets off pretty lucky.

Sidenote: the Haly’s ringleader is played by James Monroe Iglehart, who is also a goshdarn delight as The Genie in Broadway’s Aladdin. Yes, ladies, I do enjoy Broadway AND comic books. 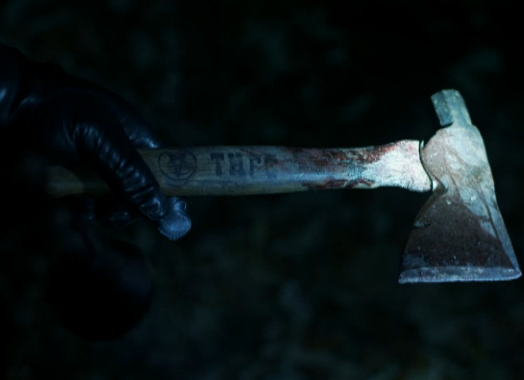 Jerome’s father tries to pin the murder on a Satanic group called the Hellfire Club, which is weird because the Hellfire Club is a Marvel Comics thing. Batman and Gotham, as some may know, is DC Comics. Ruh Roh. I’m sure Marvel Studios president Kevin Feige will complain, as long as he can find his phone among the ginormous mountains of cash he probably has in his home.

So what’s this kid’s deal? 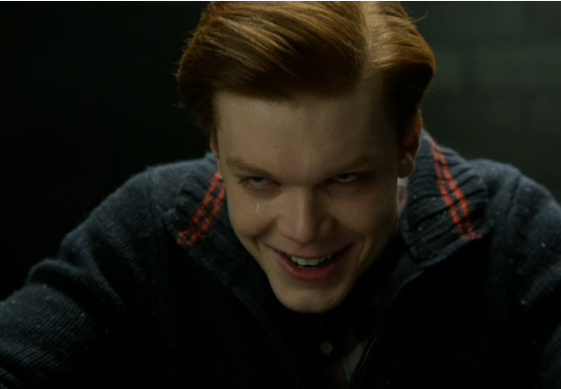 Honestly, I don’t know. This recap will be finished long before Fox releases the teaser for next week’s episode. So, I don’t know if this was a long term thing or a one-off, which would be a strange thing to do if Jerome really is the Joker. I mean, even the Scarecrow got two episodes.

But, really, I hope there’s another answer. Maybe this poor circus kid was somehow exposed to an early version of what becomes Joker Toxin, which explains the manic grinning and laughter and murderous tendencies. Maybe. Actually, that would be cool. Do that, Gotham.

If this Jerome debacle is all part of a long, planned out, master plan, then my apologies. Next week’s episode is entitled ‘Red Hood,’ so even that has implications I won’t get in to just yet. All I’ll say is, even if they somehow just stick a red helmet on Jerome’s head and have baby Batman kick him into a tub of chemicals, I’ll feel 1% better. 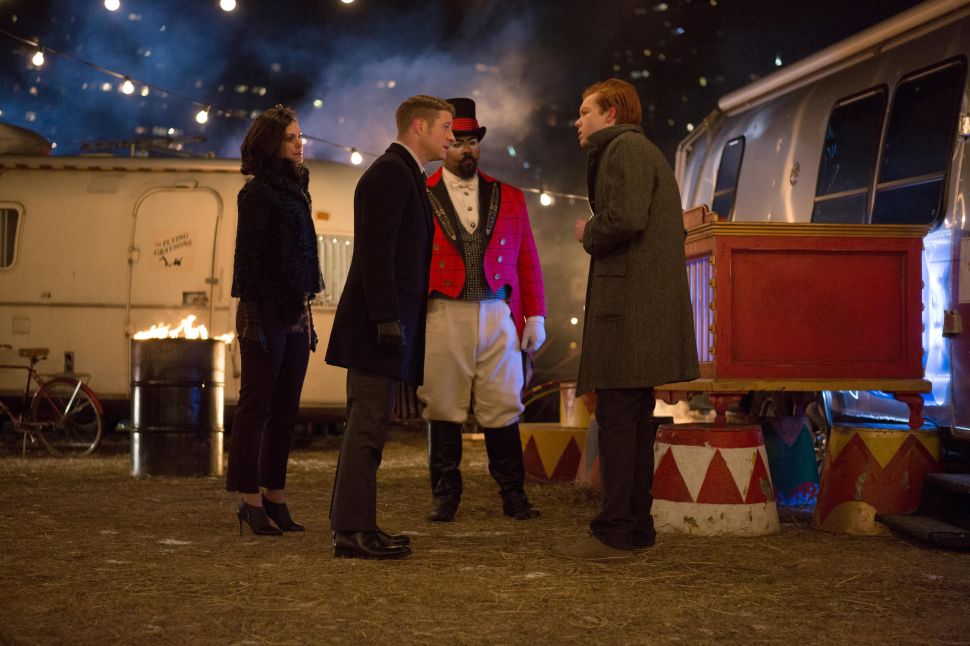