Ryan Reynolds’ fan base might be dismayed to see their appealing, buffed hero with a strong personality that always hides beneath a façade of tenderness playing a demented serial killer with talking pets in a blood-splattered horror film. But to avoid his playful—and sometimes compassionate—performance in The Voices would be tantamount to losing out on an unusual psychological thriller with humorous overtones that is not quite like anything seen before. It’s a tormented Tony Perkins at the Bates Motel, re-imagined by Saturday Night Live, with all the risks implied.

Fanciful, sweetly unbalanced and just right for the part, Mr. Reynolds gives his best performance in years, miles away from his familiar work playing college boy as international comic book action star. He even looks perfect. Think about it. By day, he’s Jerry, a mild-mannered, nice-looking but socially awkward young shipping clerk in a small-town bathtub factory. But Jerry has a history of mental unbalance that goes off the rails whenever he forgets to take his meds, turning him into a terrifying monster after dark.

Although his therapist (Jacki Weaver) has him on a strict regimen of anti-psychotic drugs, and he has even progressed to the point where he feels secure enough to ask a sympathetic co-worker (Gemma Arterton) out to dinner, he still reverts to an unhinged state of dementia, fueled by contrasting voices from his dog, who assures him he’s a great guy, and his cat, who goads him into believing he’s moronic and universally hated. When his date goes wrong, Jerry goes crazy. The screen runs red.

Written by Michael Perry and directed by the imaginative Marjane Satrapi (Persepolis), this is a mix of the macabre and the mischievous that is likely to reach cult status. A lonely outsider who is deeply disturbed (shades of Deneuve in Polanski’s Repulsion). Shocking and compassionate, Mr. Reynolds is an amazing mix of sweetness and depravity, giving a performance of astonishing depth. In most of the scripts he chooses, he’s the rugged, bland charmer, righting wrongs and surmounting hurdles. In The Voices, he’s as urgently tormented as he is coolly appealing, and watching him show the inner struggle of Jerry’s fractured psyche is as much a cry for help as a search for normalcy in a world that is wacked out already, without his help. His touching scenes with Anna Kendrick, as another co-worker who begins to hatch her own feelings for his shy, clumsy office mate, showcase Jerry’s conflicted persona best.

Stylized direction, aided by a nuanced script, allows us to see Jerry’s disintegrating world from his own haunting perspective, and Mr. Reynolds’ cheerful face makes his descent into madness completely unique. In case you question the film’s send-up of optimism turning the color of an exploding blood bank, there is even a musical number. It’s whimsical, terrifying, insane and not to be missed. 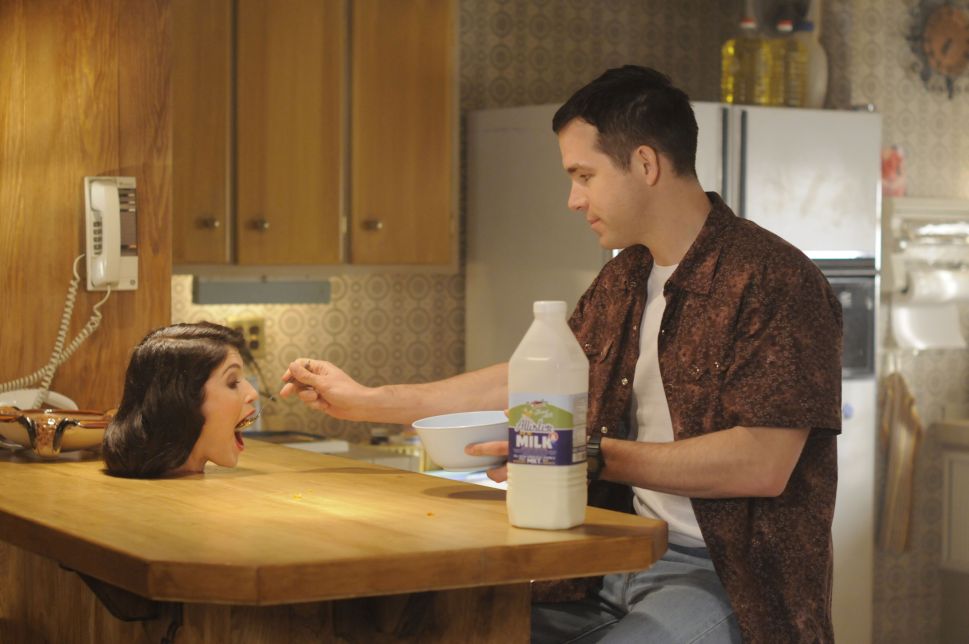