Mistress Astrid needed a wardrobe. She was starting a new gig at a graphic design studio, and lacked professional attire. So she did what she always did when she wanted a fast buck: She emailed Ralph, one of the wealthy “pay pigs” who served her, gifting her clothes, shoes, gadgets, groceries, luxury vacations—whatever she demanded.

All she had to do was verbally abuse him. Not handcuff him or lead him by a leash attached to his balls. Not fuck him. Not even meet in person. Just remind him, yet again, by email, what a worthless piece of dirt he was.

“I had to make it clear that he wasn’t good enough to be in my presence,” says Astrid, a tattooed redhead in her early 30s, who lives and works on the Lower East Side. For that honor, he gave her access to a credit card, paid her utilities and rent, and handed her extra spending money when she wanted it. “I’ve gotten five grand, 10 grand, just for me saying ‘I need it, no questions asked, fuck you,’ ” she says proudly.

Nice work if you can get it.

Many relationships are virtual, conducted via Skype, webcam, email, text or just regular phone. Some Fin Doms advertise online (at websites like findoms.com, a kind of Linkedin for the subculture, or financialenslavement.com, which poses the enticing question, “Does the thought of surrendering your finances to intelligent and attractive women turn you on?”). Most doms accept credit cards, PayPal, Amazon gift cards, and of course, cash. For many practitioners, it’s just one piece of their overall domination repertoire.

“Ninety-five percent of the men who contact me have no interest in sex—period—with me,” says Dee, who has been in the S&M scene for about six years both here and abroad; financial enslavement and cuckolding are among her specialties. Her website boasts, among other things, a “wish list” of coveted items for clients to buy: Prada handbags, Louis Vuitton steamer trunks, theater tickets, along with sex swings, and military uniforms. She estimates that half of her clients are high-profile: Bigwig executives, media moguls, bankers, lawyers—people with much to lose. Which may be exactly why they enjoy it.

For the Fin Dom of course, romance is not exactly the motive to set up shop. Rather, humiliate some hapless bugger and live large. Before the mistress will even consider taking on a new client, in fact, she requires a monetary “tribute” just to determine if he’s worth her time.

How hard could it be? It’s actually more challenging than one might think. A dedicated dom spends years refining her craft and must be perceptive—they engage in serious role-play, after all. In particular, the Fin Dom must learn restraint, so to speak, discerning what makes her client squirm without going over the top. She must learn her client’s psychological triggers, and then manipulate him to her benefit (“wallet rape,” in the parlance).

She must also earn a client’s trust. In an ideal scenario, the Fin Dom will know his annual salary, how much he spends, and where he spends it. She might do a budget for him and require that he ask her permission to tap his savings—the ultimate money manager. “There are many different iterations,” notes Dee. “When it really is working well in a healthy way, the dom cares about the man she’s taking money from and does it in a way that’s responsible. It’s an act of love at its best.”

It’s also exhausting. As with the buzzword dujour, the interaction must be “authentic,” with the Fin Dom maintaining an image of superiority at all times. If she lets the mask drop, the scenario loses appeal. “That takes a lot of mental, physical and emotional energy, not only to look the part but also to act the part,” says Dee. “It’s an act of generosity.”

Damien Rosenfeld, who uses a nom de guerre, is a pansexual, bi-coastal Fin Dom. He points out that his work requires a great deal of forethought and planning.

“You have to play with the emotions of the guy, to give him the high that he’s seeking,” he says. “Simply asking for money or toys isn’t gonna cut it. You have to deliver the punch line at the right time so the person feels turned on by the insult. You gotta know their buttons and where to press.”

With physical domination there are safe words, but with financial humiliation, things prove murkier when barbs serve as weapons

“I’ve had a lot of Hassidic guys,” he says. “Some want to be degraded for being Jewish. Others won’t tolerate it, they’ll walk out. Some want to be told they’re a rich piece of shit, a parasite. There’s a fine balance of pushing limits.”

What would make a person put someone he barely knows in charge of his wallet is difficult to comprehend, especially for those of us who struggle to pay our own rent every month, let alone someone else’s. But that’s precisely the appeal. The majority of these men (and the vast majority of clients are men) enjoy living on the edge. They like making financial sacrifices (though many have a disposal income, so the sacrifices aren’t too great); consensual blackmail is part of the allure, as is the relinquishing of control.

“Most of these men are in a position of power by day and simply want an opportunity to be powerless, where they have no authority or control,” says Jonathan Alpert, a New York psychotherapist with a large Wall Street clientele. “It’s a way for them to get out of that decision-maker-in-chief mode to one of passivity.”

“Different people find a high in different ways,” says Brandon Wade, the founder and CEO of seekingarrangment.com, who estimates that about 5 percent of the site’s approximately 4 million subscribers look for Fin Dom relationships. “Some guys achieve that by sky diving or jumping off a cliff on a snowboard. For other men losing control by being insulted and used is a way for that adrenaline rush.”

In junior high, for example, he’d often walk his girlfriend home from school. But rather than lean in for the first kiss, “I asked if I could get down on my knees and bow down to her,” he recalls by phone.

“She got into it for a little while, and even turned it in to a spectacle by having her little brother watch, but eventually she got bored and moved on to other boys who were more physically and sexually aggressive.”

He followed Sierra’s website (financialdomination.com/journal) closely, but at the time he was a poor college student and didn’t have the means to explore his desires beyond buying girls drinks. Once he had some extra cash, he pursued it.

Or look at it this way: “Would you rather whip a guy and call him dirty names, or go to the mall for a shopping spree?” (When you put it like that…)

Typically, he and his mistresses engage in one of three encounters: A “chore date,” in which he’ll pay her to let him tidy her car or apartment, do her laundry, or scrub her floors. A “shopping date,” where he purchases her goods and schleps her bags. Or a “humiliation date,” like the time he paid a girl to let him wash her car while she barked orders before several witnesses.

“I love it when a woman punctuates her orders by referring to me as a ‘bitch,’ ” he says. “I derive an emotional and sexual thrill when the dominant female I am serving experiences the power rush and ego boost that goes along with owning her very own submissive male slave.” Generally, he prefers Fin Doms between 18 and 27, athletic women who shop at stores like Lululemon, women with “pretty, innocent-looking faces and sparkling eyes that hide greedy, sadistic and narcissistic personalities.”

Dennis, who is currently serving one woman exclusively, insists that his self-worth is intact, that he has no deep-seated psychological wounds. His parents have been together, lovingly, for four decades; he doesn’t recall any significant trauma from his youth. A more resonant explanation, he suggests, is evolution. “It makes sense to think that men with a desire to provide for high-status females, without demanding sexual exclusivity, would, at least in some cases, be naturally selected for,” he says. “As a mate, such a male allows his partner access to a greater variety and quality of genes, while also working hard to provide resources necessary to raise offspring.”

Maybe so. But it doesn’t explain why being verbally castrated is so alluring.

“When you give away your money, you are literally giving away your power,” says Dee. “Being disempowered is hot. One of the most emotional ways to disempower someone is financially. It’s a way to be out of control in a deeply personal way and a very real-world way. There’s nothing fantasy-based about handing over $500 of cold hard cash to a dom in public.”

Some clients don’t even know why it turns them on so much.

“She said, ‘Can you come and be a good boy and pay the bill? Run!’ ” Richard recalls. He hurried over, an erection budding in his pants, and forked over the cash. She nodded at him—and dismissed him. The turn-on was enormous.

About week later she sent him a text with a picture of a pair of boots and the information on which Village boutique he could buy them. That night, he delivered them to her apartment and left. Two weeks later, she asked him to meet him near Battery Park City. She showed up in a cab, rolled down the window, called out his name, and accepted the $200 he held up. Then she zipped off. Eventually, he opened a bank account for her.

“When I read about financial domination I thought it was ridiculous,” he acknowledges. “Then when it happened to me it was arousing. It’s not affecting my life savings, and I kinda feel like I’m helping someone who needs it and I get off on getting used.”

“The guys with old money back East—those people are guilty because they didn’t make their money,” he continues “The guys with new money can feel guilty depending on how they made it.” Apparently the threat of bankruptcy is, in some corners, hot.

The greatest tragedy, at least to those in the trenches, is that the relationships have to be secret. Mistress Dee swears that most of what she does is “so tame and so innocuous, and yet so quickly condemned by people who don’t understand it,” she says. “I spend a lot of time around my clients but also have my share of intimate time with so-called ‘vanilla’ people in the ‘regular’ world … The more I get to know human beings, the more I’m realizing that no one is fucking normal.

“Everyone,” she says, “has their weird shit.” 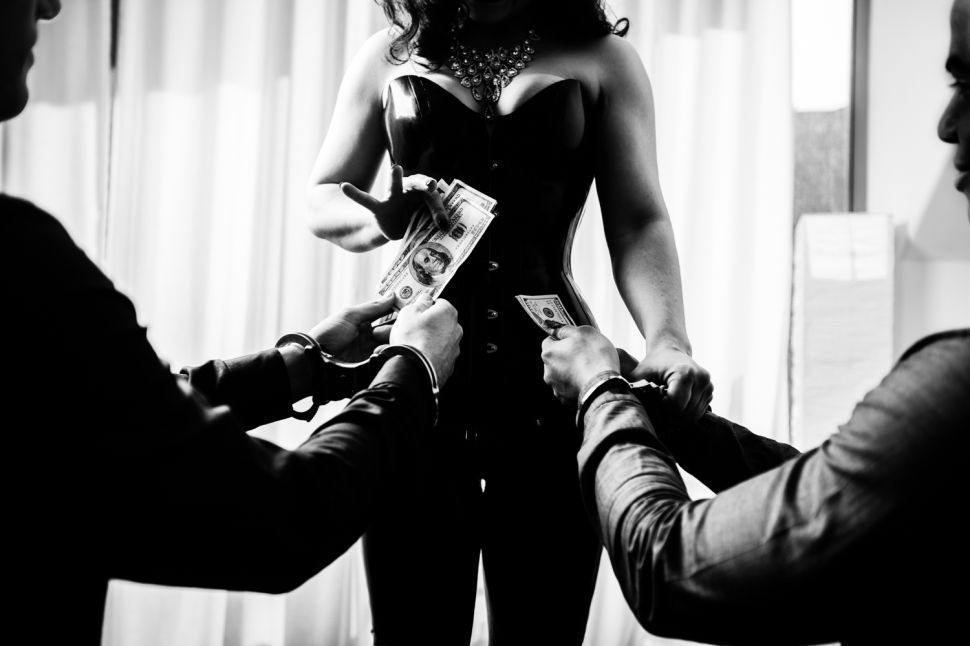