Update, 2/25: Mat Carpenter has confirmed that the glitter bomb pictured below was, indeed, sent out by the people who bought his company. “That would be the work of the new owner,” he told the Observer in an email.

The Observer also received an email from Peter Boychuk, who identified himself as the new owner of ShipYourEnemiesGlitter. “The envelope the Reddit user posted is from me, not Carpenter,” he confirmed.

What started as a stunt to fool reporters might actually have become a legitimate company.

The Internet was abuzz last month with news of ShipYourEnemiesGlitter, a site that, as the name implies, lets users bombard people they don’t like with the hard-to-clean craft staple for $9.99 a pop. After a quick, two-week rise to viral fame, the company sold for $85,000.

While many news outlets portrayed ShipYourEnemiesGlitter as a typical, fast-growing startup, the Observer‘s Ryan Holiday learned the truth: that the site’s founder, Mathew Carpenter, was actually an SEO expert who created the company as a marketing stunt. His aim was to prove how lazy journalists would report on anything—including a bizarre glitter startup he made up, and had little intention of actually running.

“Lately I’ve found that the media (here in Australia particularly) has become extremely lazy with sourcing,” Mr. Carpenter told the Observer at the time. “90 percent get their stories from aggregation websites which is what I initially targeted.”

But in a funny twist of fate, it appears that whomever bought Mr. Carpenter’s company might have actually turned it into a real glitter-shipping company. Currently on the front page of Reddit is a post by MegaAlbus1 titled “So this arrived in the mail today,” with a link to the following image:

Could ShipYourEnemiesGlitter actually be functioning now as a normal, non-marketing-stunt company? ShipYourEnemiesGlitter.com still appears to be functioning as a normal website, and users appear to be able to place orders. It wouldn’t surprise us; given the enthusiasm for Mr. Carpenter’s initial idea—fake or not—it seems there’s a huge demand for a way to anonymously coat your enemies’ bodies and homes in what Mr. Carpenter has called the “herpes of the craft world.”

Of course, it’s also possible that the glitter bomb in question is one of the initial orders placed when Mr. Carpenter still ran the company—one of the orders he, himself, sent out before handing ShipYourEnemiesGlitter over to its new owners. Or, what if Mr. Carpenter never actually sold his company for $85,000, and this Reddit post is just the next phase in a marketing stunt more elaborate that anything humankind has ever seen?

We reached out to Mr. Carpenter asking him if the glitter bomb in question is one of his own, or if, indeed, the company’s new owners have turned his marketing stunt into a reality. We will update this post if and when we hear back. 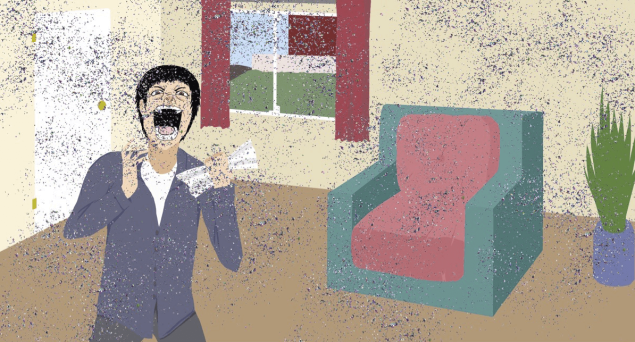