Take your shoes and socks off.

Roll out your mat quietly.

Don’t silently hate on your teacher. That’s even more unbecoming.

Leave as quietly as you came.

How did I learn all the unspoken rules of yoga?

Well, I broke all of them.

I remember walking into my first class — I threw the mat down, chatted loudly with a neighbor, stared shamelessly at my practicing peers, and started making the kind of contorted faces that signaled a singular and exasperating pain.

It was all very unbecoming.

But little did I know, this display was the start of a journey that led me to becoming a certified Yoga instructor. Because even after a few sessions, you start to realize that yoga class is singular— it’s a place where you will bend, stretch, fold, and sweat as profusely as God will let you. And in theory, after hours of downward dog, you’ll gain the enlightenment, divine light, root chakra, inner fortress, and life purpose you deserve, all for a few hours of your sweet, limited time. And I wanted to teach it. So, packed with self-doubt and questions about my own inner harmony, I started teacher training. Was I ready to become a yoga teacher? I had no idea. But it was worth a shot.

Before I joined the rankings of the spiritually enlightened, of course, there was one rule: you had to actually complete the training program. I remember the first day. The teacher entered the room for meditation training. I adjusted my legs into a position that I thought wouldn’t kill me for 30 minutes.

Then, it was silent. I guess training, I thought, just meant attempt. But soon the seconds started counting down. And then, I got restless.

Within minutes, I couldn’t stop thinking that I had just made the greatest mistake of my life and I should probably get the hell out of this room, stat.

The truth was I was dying in there. After 30 minutes of sheer internal hell, I realized that maybe I wasn’t cut out for teaching the path to spiritual enlightenment. If today was any indication, it didn’t seem like I was much good at it myself. Because I felt like a sherpa who never reached the summit.

I was ready to quit. As the class ended, to mask my shame, I said nothing while I waited to hear the stories from my peers. But instead, I was bewildered: they admitted to similar, if not worse, experiences than my own. One woman even counted the whole time to relieve the suffering of sitting in silence. The suffering, she said. Imagine that for your yoga teacher.

I soon realized that I was not joining an enlightened group of those who have conquered fear, looked mortality in the eye, or found ever-lasting peace. These people instead felt more broken, raw, and exposed than anyone I knew. They were showing up in their humanity and it might not have been pretty. But it was real.

As I finished three months of training, I exposed my vulnerabilities. And almost as quickly as it began, I realized it was time — time to teach my first Yoga class.

I always thought that teaching yoga would look more like watching a highly choreographed dance video. The students would be perfectly synchronized and move gently from pose to pose until they lied peacefully on savasana (that’s yoga-nese for total relaxation).

But the truth is that teaching yoga feels more like having sex in the dark with strangers. No one looks at you. They sweat a lot. They look mad, then blissed out. Then they leave.

The truth is that yoga breaks you open and then sets you free. It hurts first and then gets better. And yoga, enlightenment, your inner chakra and the purpose of life, ended up being nothing like I expected. It was something I had to figure out  —  unbecomingly  —  on my own.

But most times what we find on the other side isn’t the bliss we imagine, but a different shade of the same stuff we saw before. Enlightenment was never a blissed out moment of self-composure. If enlightenment meant anything, it was experiencing the world, your mind, and your feelings for what they are.

But the problems you had, the concerns you had, the hobbies you undertook, the quirky things you said — they all stayed the same.

If Yoga has given me anything, I can say this: it’s given me a lot to think about.

Laura Coe is a coach and the author of Emotional Obesity: A Philosophical Guide to Lighten Your Life. After selling her company to a Fortune 500 firm, she left business to pursue her lifelong passion and is devoted to helping others do the same. 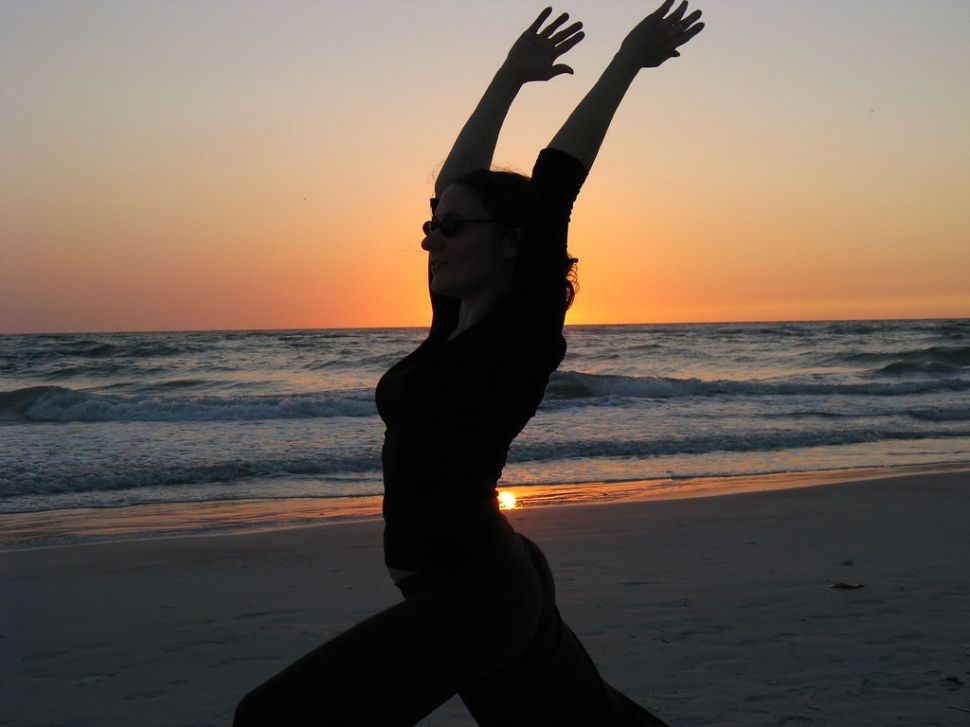