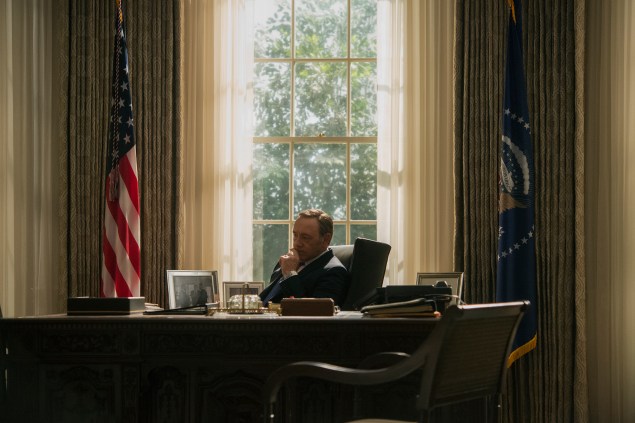 Meditation on world events because you are Boss: IN. (Netflix)

In: Talking to the camera whilst peeing 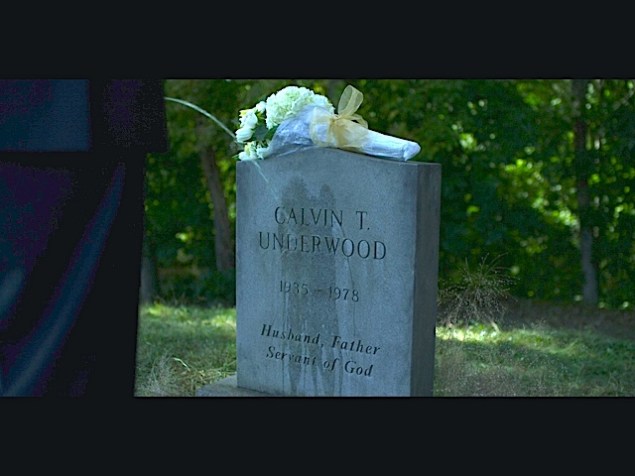 Frank is still treating the camera as a depository for his delusions of grandeur, and he silver-tongues right at us in the very first scene, on a visit to his father’s grave back in South Carolina. Frank pontificates about being POTUS and all that delicious power he now holds… and then he straight-up takes a leak all over the final resting place of Calvin T. Underwood. Which, incidentally, is a brand of boxer briefs this recapper would totally buy.

In: Doug!
Hey, it’s switcharoo! The gravestone in the first scene is a total red herring, because Doug isn’t dead at all! That totally fatal car accident from the Season 2 finale? Not fatal in the least! Doug is quite beaten up and pretty out of it, but he’s going to be just fine — and we know this because he correctly distinguishes a drawing of a camel from a drawing of a rhinoceros. Humps vs. horns, in case you ever need to pass a doctor’s competency test.

Gavin the Creepy Hacker makes a brief appearance in the episode to give Doug the results of his search for Rachel (verdict: she’s gone off the grid), but TV’s most lovable guinea pig does not get even a single second of screen time. Bummer.*

(Ed side-note: Hiring the most dangerous hacker to work at the FBI already sounds like Persons of Interest or The Mentalist or Blacklist…one of those “ist” shows. But none of them had a McPoyle brother working undercover as  Orsay, or had a cutey-pwatutie little fur ball!) 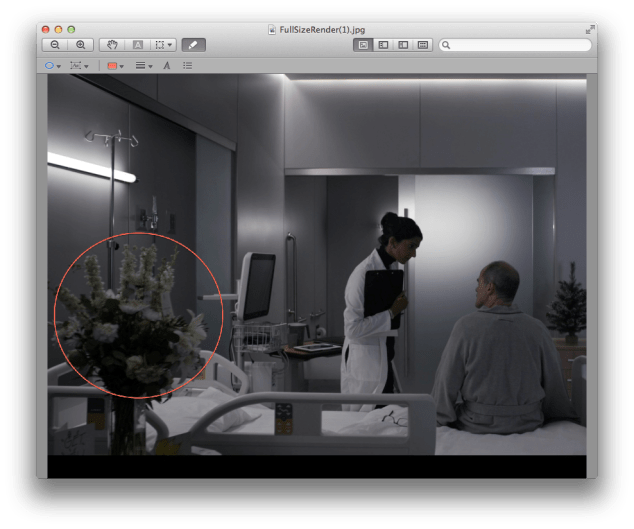 Frank and Claire send Doug a bouquet of white flowers, including several plump calla lilies, while he’s in the hospital. They’re quite beautiful and juuust the right amount of vaginal.

Out: Roses
There are no roses in this episode. No periwinkles either. Nary a daisy, nor a single spring of baby’s breath.

In: Jobs
Job growth is looking like it might be the McGuffin of the season. Special interests! Medicare! Private sector! The bedrock of the American Dream! These are terms we’re probably going to hear a lot, as the practical excuses that allow for deception and betrayal. 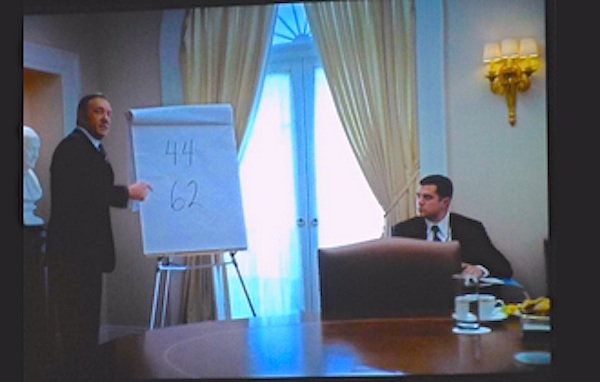 Out: China
Everyone’s tooootally over China now. Which is unfortunate, because Frank does say that word with such a lovely Southern lilt. (Ed note: At one point, he starts to say China and there is just a suuuuper chill win that runs through that office meeting. And he was just admiring  the lunch plates.)

(Ed. note: Holy wow, was this a season one Easter Egg/spoiler? Will Frank become Supreme Leader of China?) 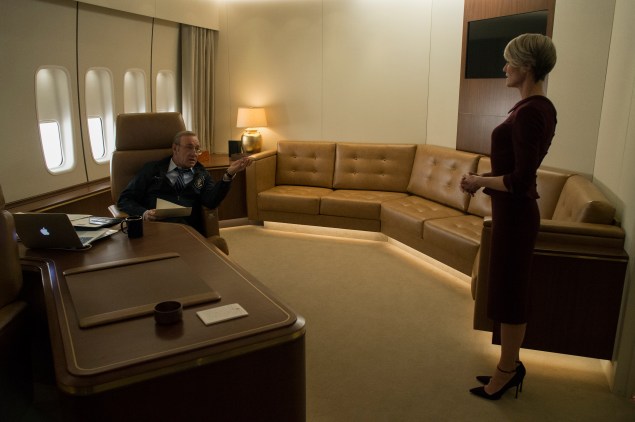 “Maybe we should have taken Paltrow’s advice a little more seriously.”

Not only is Frank now the leader of the free world, but Claire is gunning for a UN ambassadorship. Under-qualified? Pshaw. Have you seen the tailoring on those structured blazers? And the way she bites her lower lip when she’s going after something she wants? Talk about ambassadorable! 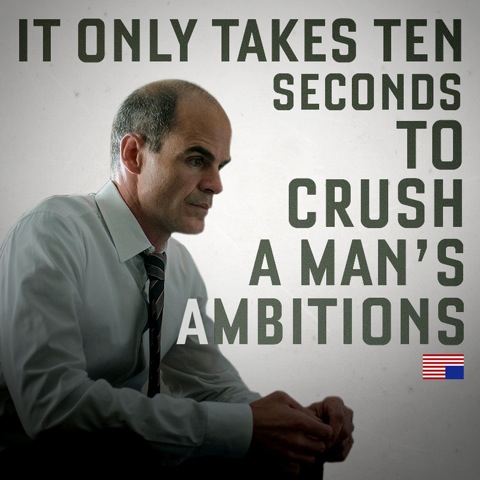 …and then snort a rail off a hooker.

Doug may be alive, but he certainly isn’t well. He returns to his sad, sparse apartment, still too injured to care for himself, and immediately falls down in the shower. He breaks his arm and sets it with a large wooden spoon** — which is surprising, because doesn’t Doug exclusively eat take-out Chinese? How did a cooking implement get into his home? Doug then flirts with relapse by hiring a hooker who looks a little like Rachel to squirt a tiny bit of bourbon into his mouth, which he gulps and swallows like the most depraved baby bird on earth. Man, Doug is way Eli Roth this season. 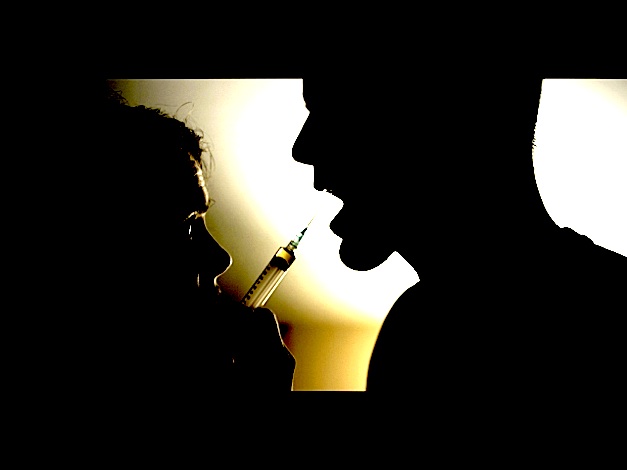 Out: Murder?
No one has splattered against the subway rails yet this season, but we’re holding out hope for episode 2.

**Ed note: Oh my god. What was going on there. He didn’t dislocate a shoulder and pop it back in. His bones straight fractured! A SPOON WON’T HELP! This show suddenly got very upsetting! 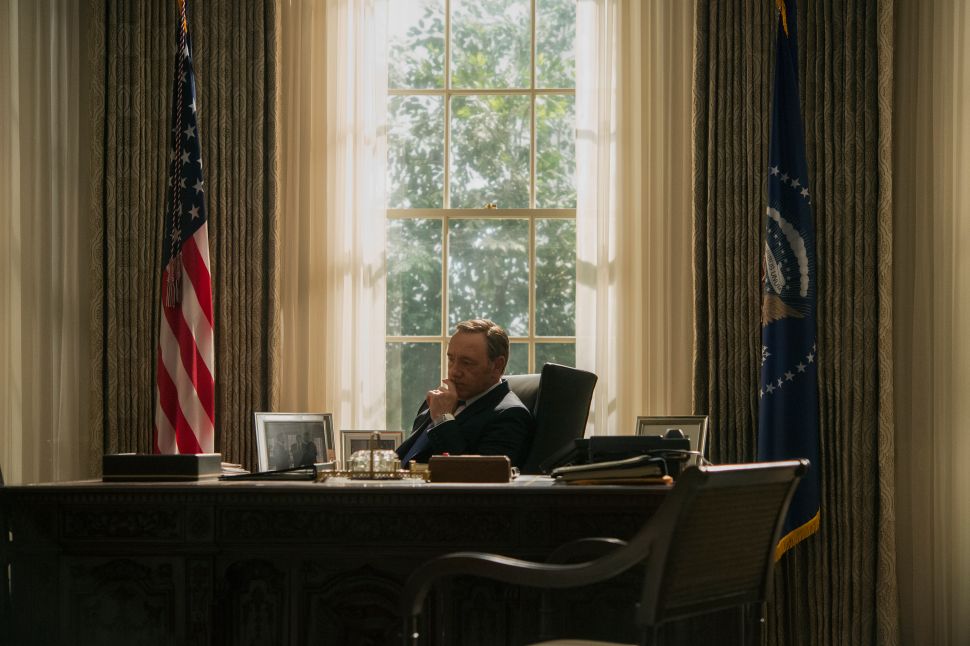