At first glance, Lee Camp, Thom Hartmann and Larry King don’t seem to have a lot in common. Mr. Camp is a comedian who seeks to fuse progressive politics with humor. He is perhaps best known for his “Moment of Clarity” rants, where he colorfully, and occasionally profanely, analyzes an issue from the news. Mr. Hartmann is a progressive radio host, author and pundit who has written numerous books, articles and blogs. Larry King is legendary talk show host and erstwhile Little League coach. He has interviewed presidents, actors, musicians and even Oprah.

All three of these media personalities, however, share a link to RT (formerly Russia Today), the English-language arm of the Russian government’s media operation. In less diplomatic terms, it is a Kremlin propaganda machine. RT’s coverage of Russia, the conflict in Ukraine and other issues having direct bearing on Moscow’s role in the world, include headlines that sound like they could have been written by Russian President Vladimir Putin himself. Mother Russia is portrayed as a force for only good and peace in the world. It’s anchors and “reporters” have enthusiasm for euphemisms such as “stabilizing force” (“invading army”) and “humanitarian aid” (“military intervention”). RT’s coverage of Russian politics is heavy-handed, unsubtle and, in the U.S., not particularly effective. Despite RT’s best efforts to gin up sympathy for Russia in the current Ukraine conflict, most mainstream politicians and media outlets continue to compete with each other to see who can demonize Putin most.

RT’s coverage of the U.S., however, is different. While it certainly has an political agenda, one that is not of the left or the right, but simply to portray an image of the US as a deeply flawed country with a corrupt and ineffective political system, RT covers news, and offers perspectives that are not often seen American broadcast television. RT touts itself as offering a “second opinion,” through its American media campaign, described by Ronn Torossian recently here at the Observer. RT is certainly neither objective or balanced, but it is at least as legitimate a representation of the realities of the U.S. and of American politics than, for example, Fox News, and generally offers considerably more depth than what is offered by how ABC, CBS or NBC present the news.

Recent RT headlines such as “Police Brutality Activists Angry Obama Glossed Over Ferguson ‘Events’ in SOTU” and “Majority of America’s Public School Children are Living in Poverty,” span a reasonably broad ideological range, but seek to consistently to portray the U.S. in a negative light. These are also stories that much of the media overlooks. This approach, and similar language can also be found in RT America’s busy Twitter feed. If RT were funded through advertising or the largesse of a quirky American billionaire and only covered domestic politics here in the U.S., it would be viewed by many as a useful component of a diverse media environment. For these reasons, RT is now the most watched foreign news outlet in the U.S., with an audience that is estimated to be 6.5 times as large as its closest rival, Al Jazeera America.

In addition to its news coverage, RT has also become a clearinghouse for the opinions of American dissidents, including those on the far left like Noam Chomsky, the far, if twisted, right like Pat Buchanan, and increasingly fringe Libertarians like Ron Paul. While opinions like these are provocative, unpopular and often a little wacky, RT gives American audiences access to ideas and opinions that are considerably beyond the narrow bandwidth in which most debate in the media usually occurs. Clearly, these opinions are more extreme than the more genial progressive politics of Mr. Camp or Mr. Hartmann or of the generally politically neutral work of Mr. King, but taken as a whole, RT provides a very broad range of political outlooks.

Somebody who only watched RT would have an image of the U.S. as a place of radical economic inequality, widespread civil unrest, corrupt politicians, racial animus and a collapsing economy, committed to expanding its global influence through military might. Of course, somebody who watched only Fox News, would understand the U.S. to be a country that is in the throws of a socialist takeover where an oppressed minority of white, heavily Christian citizens, are now losing the country that was given to them by the almightyy, to hordes of illegal immigrants, non-whites, homosexuals and atheists. Both Fox and RT are propaganda organs espousing very biased views of American politics. The major difference may be that Fox represents one extreme of the domestic political spectrum while RT is the propaganda arm of a foreign government. While RT draws more viewers than other foreign news networks like CCTV from China, Al Jazeera America or even the BBC, its viewership is dwarfed by major American news stations like Fox; RT America has 194,000 Twitter followers compared with Fox News has 4.83 million Twitter followers.

But dismissing RT’s coverage as simply a Russian propaganda, however, is a mistake. The insights of people like Mr. Camp and Mr. Hartmann, while not universally agreed upon, certainly resonate with many Americans. It is significant that it is only on a Moscow-funded station that voices like those can be heard, reflecting how the major media outlets still only present a relatively narrow range of views on most topics. Second, providing a critical and resonant portrayal of American politics to American viewers will eventually make those viewers more open to RT’s dubious presentation of foreign affairs and Russian politics. The Kremlin hopes that the same people who watch RT’s US programming and wonder why stories about, for example, why the US is classifying information about aid to Afghanistan, will soon begin to question why so few voices on American media are critical of the Ukrainian government.

Consider RT’s coverage of American politics as a bait and switch, from critical insight about the US to dishonest propaganda regarding Russia. 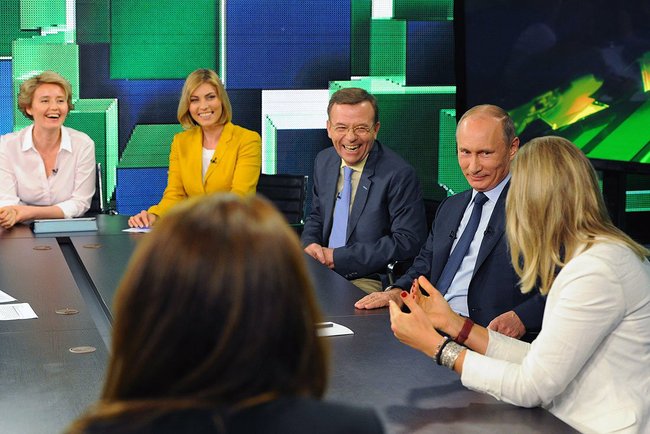