Insiders in the Christie administration report a steady exodus that has left the governor with no one of substantial gravitas to stand up to him. (Jeff Zelevansky/Getty Images) Getty Images

A political junkie looking for a fix could do worse than clicking here, where the viewer can see the governor’s “Senior Staff.” Not only does one discover that the gov’s team is not great about updating its website (the link has not been freshened in at least four years). But the more startling revelation is the number of people listed who are no longer at the governor’s side. Nine of the ten names listed here are no longer in the governor’s office. Adding Mike Drewniak, the spokesman who just announced his departure (during budget week!), that’s 91% of Christie’s core advisors who have jumped – or been pushed – elsewhere.

According to a brutal story in the New York Times headlined Critics in G.O.P. Say Chris Christie Is in a ‘Bubble,’ one of the explanations for Christie’s struggles of late has been the unwillingness of those close to him–those in the bubble—to stand up to him. So let’s drill down into this list to examine what the loss of each has meant to the Christie administration. A screenshot snapped this morning reveals an administration website that’s not only 3+ years out of date but also that 90% of Christie’s closest staff have moved on.

Rich Bagger – The universally well-regarded former State Senator left a plum gig at Pfizer to return to New Jersey and rejoin Christie’s administration as Chief of Staff. As a moderate who got along well with everyone, Bagger was never quite trusted by the more gung-ho Christie disciples but when he left in late 2011 to take a job at Celgene, the administration lost a key “adult in the room” who could communicate effectively with the Democrats.

Maria Comella – The sole remaining member of Team Christie from this list. Her relationship with Drewniak was called “toxic” by one Christie insider. Said another, “They hated each other.” Apparently, the problem was one of both personalities and org chart. As the Communications Director, Comella expected the press secretary to report to her, as is typical. But Drewniak, who is older than Comella, was said to resent working for a young, attractive woman (in 2006, US News called Comella a “spokes-hottie” in what might be the very first recorded deployment of that term). Drewniak had bonded with Christie during their years together at the US Attorney’s Office and had a “direct line to Christie” according to a source, helping to create “horrible chemistry” between Comella, who was trying to manage the big picture and Drewniak, who would deal with the press on the ground.

Bill Stepien – Having steered the governor to two tough victories, Stepien was, according to a source, “the one guy in that room who wasn’t a former U.S. Attorney’s Office person who the governor trusted on political judgment.” Stepien was fired by the governor in the wake of Bridgegate, and according to the Washington Post, “when Christie cut him loose Wednesday evening, the governor didn’t so much as speak to him.” Ouch. More than a year after the scandal, it’s still unclear what, if anything, Stepien did to warrant such harsh treatment.

Wayne Hasenbalg – Hasenbalg was viewed as a plant by Christie confidante and former law partner Bill Palatucci, who wanted “his guy” at the table and picked Hasenbalg, who’d been a partner at politically connected firm DeCotiis, Fitzpatrick & Cole and served with Palatucci in Gov. Kean’s administration. It didn’t work. The governor himself viewed Hasenbalg as “a disaster” according to one source and after less than two years in the administration was parked at NJSEA as the Sports Authority’s President and CEO.

Lou Goetting – Goetting, a longtime Trenton insider was an upside surprise for the Christie team and his recent retirement has left a big hole. “He was the rock star. He was the adult in the room.” Goetting took some heat in the press for collecting more than $7000 a month in pension even as he earned a $130,000 salary in the Christie administration. But even with the state’s pension woes, Goetting’s knowledge of how the state actually works and the intricacies of its budget, attained in the treasurer’s office during the 90s, was considered critical.

Rosemary Iannacone – Iannacone worked as Christie’s Chief Administrator in the US Attorney’s Office and came with him to Trenton to serve as Director of Operations, running scheduling and serving as his executive assistant. She left in March 2014 and earlier this month, Christie appointed her to a cozy $35,000 commissionership at the State Commission of Investigation.

Jeff Chiesa – Another close buddy from the prosecutor’s office and even earlier when they worked together at Palatucci’s law firm, Chiesa is one of Christie’s closest personal friends and thus another candidate to stand up to Christie when he’s veering off course, a role he fulfilled during Christie’s successful first term. In early 2012, Christie made Chiesa the state’s Attorney General and then sent him to Washington to fill out the term of Sen. Frank Lautenberg. Some point to the moment the low-key and grounded Chiesa left as the beginning of Christie’s loss of focus on New Jersey.

Kevin O’Dowd – Often overlooked in the chemistry of early Christie successes, O’Dowd established strong relationships with Senate Democrats. Another US Attorney’s office guy, O’Dowd and Steve Sweeney bonded early, which was a critical part of some early wins for Christie. He was nominated to become Attorney General after Chiesa, but in the wake of Bridgegate, he never advanced. Some wags suggested Team Christie purposely declined to place him before the judiciary committee because of Bridge-related questions he’d be expected to answer under oath; he had been Bridget Kelly’s direct boss during the “Time for some traffic problems in Fort Lee” email. After a year of sticking around waiting for the coast to clear, O’Dowd took a job at Cooper University Health Care, a hospital with strong links to George Norcross.

Michelle Brown, one of the governor’s closest confidantes, was one of many who served with him in the US Attorney’s office but has now moved on. (Governor’s Office/Tim Larsen)

Michelle Brown – Yet another “close-friend-slash-US-Attorney-colleague,” Brown is special to the governor—special enough to have merited a $46,000 personal loan from Christie that Jon Corzine tried to turn into an issue during the 2009 campaign. According to the source, whatever rumors revolved around the governor’s relationship to Brown, the real source of the dysfunction within the group is that “there were a large number of factions who all loved Chris Christie but couldn’t stand each other. They would do all these staff retreats or stay overnight at Trump’s. And they’d be musical rooms of one staffer running into the governor’s room and having private conversations while others waited outside. It got to a point where O’Dowd refused to stay over there because he couldn’t stand Michelle Brown. The U.S. Attorney group, Chiesa and O’Dowd, could not stand Michelle Brown and didn’t trust her.” In 2012, she was moved out of the governor’s office to become the CEO of New Jersey’s Economic Development Authority.

Deborah Gramiccioni – The last name on the list also left the governor. The lady with the Italian name in Monmouth County used to be Debbie Goldklang from Livingston; her father Marvin Goldklang is a minority owner of the Yankees and owns several minor league team’s as well. She worked in the US Attorney’s office (starting to see a pattern here?), as did future husband Christopher Gramiccioni, who is now the DA in Monmouth County. As Director of the Authorities Unit, Gramiccioni shepherded the toll and fare increases through the Port Authority. Then she replaced Hasenbalg as the Deputy Chief of Staff for Policy and “didn’t mesh well with the rest of the staff,” according to a source, who says, “She had 3 kids at home, didn’t work as hard as the rest of the staff. She wanted to be a judge.” Last year, she was appointed to the Port Authority to replace Bill Baroni and has since moved on to NYU, where she is the Executive Director the Center on the Administration of Criminal Law.

Bottom Line: Nine out of ten people on this list – a list that Christie’s own administration touted as its Senior Staff and has on its website to this day – have moved on in just five years. Kevin Roberts, a spokesman for the Governor’s office, told PolitickerNJ that “turnover happens in literally every administration in every state in the course of history” and strenuously disputed the notion that there has been a particularly great rate experienced in this administration. Still, gone are the long-time friends and similarly accomplished prosecutors who could tell the hard-charging governor what he perhaps did not want to hear. According to a third source, who texted PolitickerNJ, “They all used to [fulfill] that role. And now they’re all gone. Bagger, Chiesa, Brown, Stepien, Hasenbalg. No one left. Comella is an enabler.” 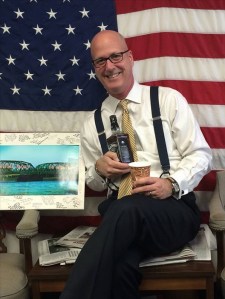 Spokesman Mike Drewniak was given a Jack Daniels send-off for his last day yesterday. His departure marks ‘the end of an era.’ (Facebook)

And now, with Mike Drewniak joining the exodus, there’s one last thing worth considering. Drewniak is regarded as an “adult in the room” figure—one last person sufficiently senior and tough enough to tell Christie when the boss was veering off track. It is strange that he’d leave in the thick of budget week. And his announcement was Monday with a celebratory last day yesterday—very sudden for a transition that can take months to make smoothly.

Drewniak, who had been a reporter at the Star-Ledger before joining Christie in the US Attorney’s office, is not wealthy. His most recent Financial Disclosure filing with the State Ethics commission lists no stocks, bonds, real estate or even whole life insurance. His wife, the well-liked and cheery Nicole Drewniak, is a fundraiser with the state GOP (which has its own financial struggles), and husband and wife both report bank accounts of less than $5000 and vehicles under $25,000. They’ve got some pension savings, but not a ton.

Raising even more eyebrows, Drewniak has not yet announced some cushy landing at a lobbying firm or “government affairs” shop—no one wants to say where he’s headed, which is underlining the feeling that Christie’s closest confidantes are abandoning ship. All PolitickerNJ could learn from the three sources spoken to for this story is from one who would say “he is not headed over to the Christie presidential campaign” but wouldn’t say whether he’s going to the private sector or what.

One administration insider put Drewniak’s departure into context for PolitickerNJ: “He has been with Gov forever. It’s the end of an era for sure.”