On Feb. 18, Jeb Bush moved forward with his presidential campaign by engaging in another campaign ritual—the big foreign policy speech. The big foreign policy speech, which Mr. Bush delivered at the Chicago Council on Global Affairs, is an important rite for any presidential aspirant, but it is not a very difficult one. The purpose of the speech is ostensibly for the candidate to present his or her vision for U.S. foreign policy and America’s role in the world, to critique or support the incumbent, and propose solutions to the vexing international crises of the day. However, candidates really only need to do two things in this speech: to demonstrate a basic fluency in current foreign policy issues facing the U.S and persuade foreign policy elites that his or her views do not lie outside of the mainstream. Additionally, Republicans have to show that they are not going to be too aggressive internationally while Democrats have to show that they are willing to use force.

Despite a few gaffes, Mr. Bush, achieved these goals. He did not, however, do much more than that. The speech was, predictably, critical of President Obama’s handling of the myriad foreign policy problems facing the U.S. and indicated Mr. Bush would try to be tougher. Arguing that, The Obama administration “draw red lines, then erase them. With grandiosity, they announce resets and disengage,” or asserting that the U.S. is “the greatest nation on the face of the earth,” is not a meaningful discussion of policy, but partisan and generic statements. Most people assumed Mr. Bush felt that way when he began to explore a presidential bid last year. The speech was also woefully short on specifics of how a new President Bush would handle Iran, Islamist terror or Putin’s Russia. The takeaway from Mr. Bush’s speech is primarily that he is a Republican who doesn’t like President Obama and who, while lacking any brilliant or new ideas about foreign policy, will position himself more hawkishly than President Obama, but still comfortably in the mainstream American foreign policy thinking.

Perhaps more interesting was Mr. Bush’s assertion that “I love my father and my brother. I admire their service to the nation and the difficult decisions they had to make, but I am my own man.” The awkwardness of a grown man, two-term governor of one of the biggest states in the country, and candidate for the highest office in the land, having to assert his independence from his father and older brother notwithstanding, Mr. Bush’s claim is striking. Jeb Bush’s brother and father conducted foreign policy very differently. The elder Bush was a realist on foreign policy who, for the most part, avoided taking risks and rarely unilaterally exercised American power. The younger President Bush, of course, turned his foreign policy, at least for his first six years in office, over to neoconservatives who were never afraid to unilaterally use American power. George H.W. Bush’s decision not to try to take Baghdad during the first Gulf War while his son never hesitated on that point in the second Gulf War is a prime example of the difference between the two Presidents Bush, but there are many more.

For Jeb Bush, pursuing a foreign policy course distinct from his prominent relatives, will require triangulating between two very different approaches. If done right, a President Jeb Bush, for example, might marry his brother’s conviction with his father’s commitment to multilateral alliances and cooperation with our allies to forge a better hybrid.

While it is not bad at all for a president to chart a foreign policy of his own that reflects the crises of the time as well as the position of the U.S. in the world, the idea of a president who is constantly worrying about being seen as independent from not one, but two, former presidents is less encouraging. In this regard, likely Democratic nominee, and current non-candidate, Hillary Clinton is in a much better position. Ms. Clinton is making no effort to run from her husband’s legacy. In fact, her non-campaign has at times felt like a defense of Bill Clinton’s foreign policy often at the expense of both George W. Bush and the President, Barack Obama, for whom Ms. Clinton served as Secretary of State.

At this point in a campaign, Mr. Bush’s lack of specific foreign policy ideas is not, in of itself, a big problem. It may, in fact, be an advantage as if he is elected president, Mr. Bush will encounter a different foreign policy environment than the one facing the U.S. now with new crises, options and decisions to be made. Nonetheless, some guiding direction would be helpful and; right now that direction seems to be simply not being his father or his brother. 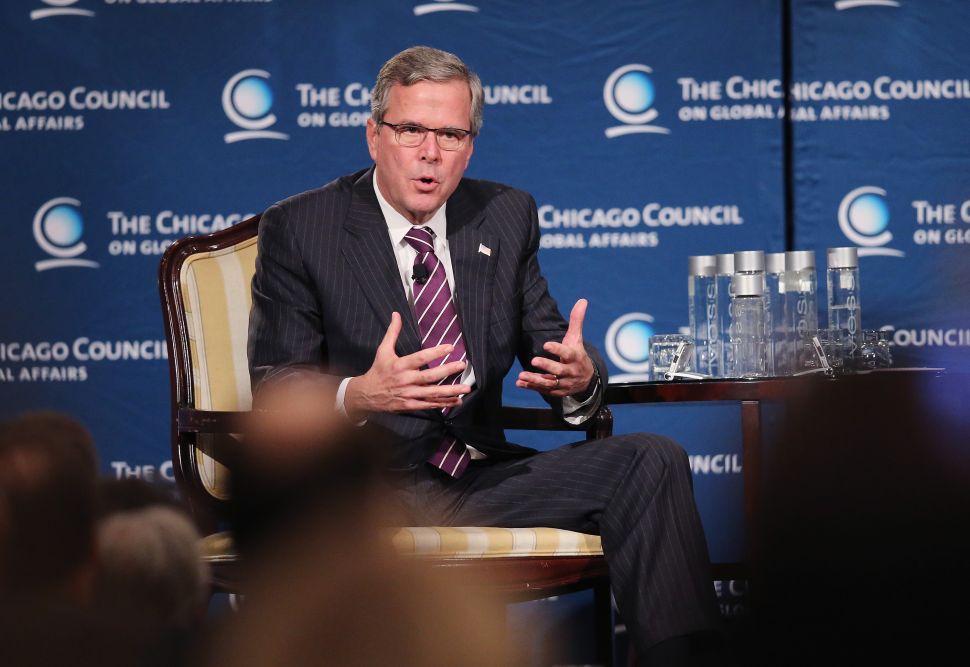