This is not, I repeat, not, an obituary for Jon Stewart. Contrary to what social media would have you believe, Jon Stewart is not dead. Jon Stewart is not even gone yet. All he’s done is announced his retirement from the Daily Show after more than 16 years behind the desk is happening…sometime, this year.

No, this isn’t an obituary, and it’s not even a goodbye. Mr. Stewart will be back on TV in less than twelve hours from right now. So this might seem like a weird time to write this, something more appropriate for maybe his last week on the Daily Show, or last day, or maybe even, God forbid, the day it actually is an obituary.

But there’s no time like the present, I suppose, and Mr. Stewart’s announcement last night at the conclusion of the Daily Show, somewhat spoiled by the curse of pre-taping, stirred up some memories long-forgotten.

I didn’t start my path toward a Journalism degree until my third year in college. Until then I was simply chasing after that job-killer of a title, that trophy of all writers who don’t really get how the world works, a Bachelors in English. And even when I added Journalism to the mix, I was staunch in the fact that it was only because it looked better on a resume. I was told, by someone I trust, “employers think English Majors know how to read, and Journalism majors know how to write.” Still, assignments that required me to find sources and quotes and impart actual real-life information to people were torture. I was a writer, not a journalist.

I was also insufferable in college.

But there’s a certain well-known figure historically devoted to letting people know he isn’t a, blegh, journalist – Mr. Stewart himself.

“People would like to place a standard on our show that doesn’t exist. We’re not set up for reporting; we don’t have an apparatus for that,” Mr. Stewart told the Hartford Advocate six long years ago. “We’re discussing things that hopefully people might get something out of, but it’s wildly inconsistent. Just because we hit on points that resonate, or people think are real complaints—that doesn’t make us journalists.”

First of all, I’m not comparing myself to Jon Stewart when it comes to influence, but I am a fan. And I know enough to know when someone is important. Mr. Stewart is important. No matter what he says about his journalistic integrity, Mr. Stewart has built a fan base built on trust. In a 24/7 world where so many of TV news outlets have become such a parody of themselves that the news I trust the most is literally a parody of the news, Jon Stewart has sway. Jon Stewart is influential. Jon Stewart might make jokes out of the truth but at least he tells the truth.

I discovered The Daily Show through my parents some years ago, through their daily 11 P.M Comedy Central appointment in front of the TV. But it took some years more after that for me to realize that what I was watching was transcending simple comedy. It was seeping its way not only into popular culture but serious, social discussions. It was, as Mr. Stewart said, hitting points that resonate. Yes, it was all to the sound of laughter. But that laughter wasn’t mindless. It was a way to deal with the absurd reality The Daily Show was presenting to us.

So no, Mr. Stewart is not just a comedian. But he is not a journalist either. Because if it’s one thing I have learned in the years I have watched Mr. Stewart helm the Daily Show it’s that in the long run it does not fucking matter one little bit what you call yourself as long as you do something important with what it is you’re doing. Comedian or journalist. Writer or journalist. There is a middle ground between everything, and there’s even something that isn’t quite a middle ground but a mixture of every positive aspect of what you want to be.

Mr. Stewart is the latter. Someday I hope I am, too.

So while Mr. Stewart continues on his final months on the Daily Show, leading up to whatever end may come, I’ll continue covering TV for the New York Observer. And maybe I’ll have to conduct an actual interview. Maybe I’ll have to do research, or look past the surface of an issue, or, blegh, use actual real life sources. Maybe I’ll call myself a journalist. Maybe a writer. Hopefully neither.

Because I know now, in the end, it doesn’t really matter either way. 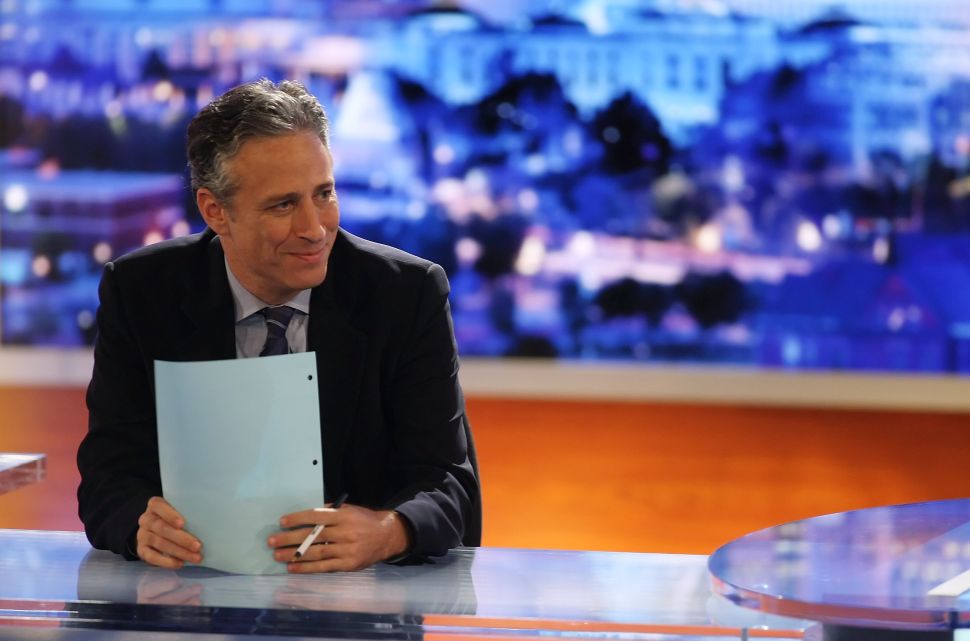