Expensive, derivative and boring as mattress ticking masquerading as designer fabric, Kingsman: The Secret Service is a James Bond parody with a teenage 007, based on a series of British comic books that, in my opinion, should never have crossed the pond. The Kingsman is a secret freelance spy organization operating out of an exclusive Savile Row haberdashery shop and composed of debonair heroes in double-breasted fashions who take the names of the Knights of the Round Table. You won’t go away humming anything from Camelot.

The head of the independent agents is Colin Firth, looking splendid as the elegant tailor Harry Hart (nicknamed Galahad) with his tongue firmly checked in his lockjaw as he tries not to frown in disgust at the routine violence or dopey dialogue. His job is to find and recruit a new Lancelot to insure fresh young blood into the group’s future as saviors of the realm, which, by the way, seems to be totally unaware of their existence. (No M to link them to the government.) The chap they discover is a junior G-Man (newcomer Taron Egerton) they call Eggy, a gymnast who left the Marines to take care of his ailing mum.

A great deal of time is wasted introducing the strenuous tests a wannabe espionage agent must pass before he can really go out and blow up London or kill interminable lists of innocent bystanders. Eggy must not only endure inhuman challenges, like being pushed out of an airplane without a parachute, but the clichés of British class snobbery.

The villain is a homicidal maniac with a speech impediment, played by Samuel L. Jackson, who lisps his way through corny lines with an excess of S’s (“Call the Chineth Thecret Thervith!”) in a performance that is more annoying than amusing. It is never clear what he’s up to or why—something about destroying the world with signet rings that deliver 10,000 volts of electricity, mobile phone cards that drive adversaries into violent rages, and shoes with knives in the toes like Lotte Lenya in From Russia With Love. Lenya did it better. I am told there is one scene in overwhelming bad taste in which President Obama’s head is blown off like the exploding heads in the disastrous, universally panned The Interview. I cannot swear to that face personally, because it happened while I was dozing off from tedium, missing it completely.

Michael Caine drops in without excuse from time to time. Vomiting at the sight of blood and serving Big Macs at a bountiful dinner party, Mr. Jackson is just silly. But the real sadness is watching Mr. Firth lower his standards. After so many astonishing performances in films of great merit, it’s dismaying to see him in drivel like this. He’s cool, his suit never wrinkles even in the most graphically derivative action scenes, and I think it’s safe to assume he got a sizeable paycheck. But Kingsman: The Secret Service is a sad pilfering of his classic talents. 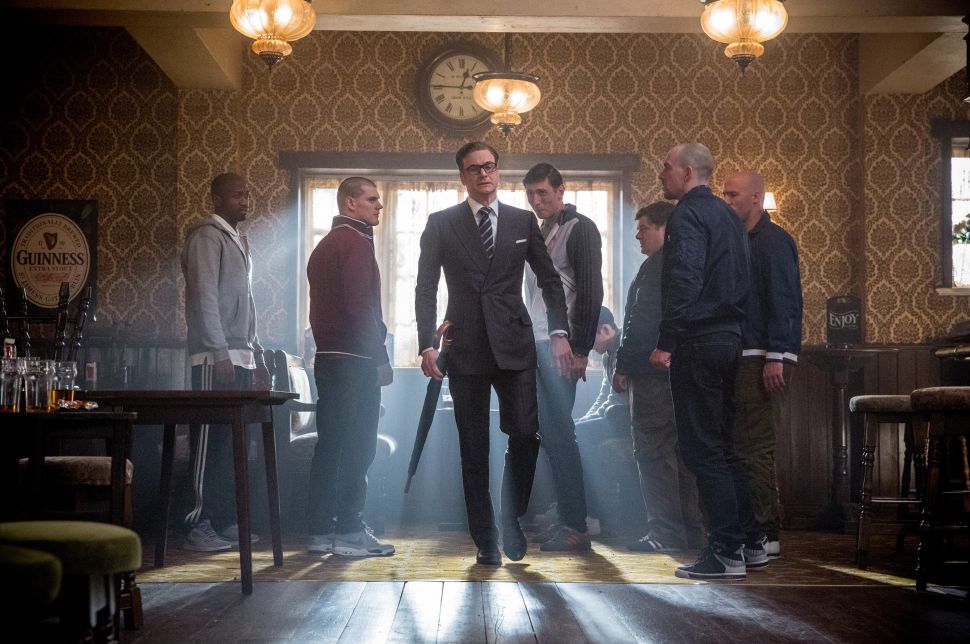