There’s never a shortage of acronyms and unusual terms used by the detectives on SVU. There’s CODIS (Combined DNA Index System), NECMC (National Center for Missing & Exploited Children) and often someone shouts, “Call a bus!” which really means, ‘get an ambulance here, stat!’

This episode of SVU, as the detectives found themselves drawn into a case with its roots in the gaming world, they learned a whole new slew of crazy gamer slang, including the terms, ‘doxxing,’ and ‘swatting.’

Like all SVU tales, this one was based in fact but was twisted to up the ante, make a statement and wrap up with a thought-provoking ending.

While never actually using the phrase, this SVU episode was deeply steeped in ‘GamerGate,’ the term given to a highly public harassment campaign against women in the gaming industry that hit a fever pitch last fall. The very use of the phrase evokes strong opinions about free speech, diversity and inclusion within the gaming universe.

In real life, media critic Anita Sarkeesian became the target of a misogynist backlash after advocating for more diversity in video games.

One night in October, Sarkeesian was scheduled to give a speech at Utah State University, when someone e-mailed the school, threatening to commit mass murder. The message mentioned Marc Lépine, a man who shot and killed 14 women at an engineering college in Montreal in 1989 before killing himself.

School officials quickly discussed the e-mail with police and decided it was safe for the talk to go on and it did, without incident.

In the fictionalized account of GamerGate on SVU, a female developer named Raina Punjabi, with her hoop earrings and blunt attitude, is clearly an unsubtle stand-in for Sarkeesian.

Punjabi, on the eve of launching her new game, receives threats by some hostile gamers. First, it’s just online bashing, then it quickly escalates to doxxing (or doxing – which is broadcasting an individual’s personal information in an open forum), then swatting (making a fake 911 call and sending the SWAT team barging into someone’s home) and finally results in Punjabi being kidnapped from the auditorium as she’s introducing her new product.

The kidnappers then send out live feeds showing Punjabi being tortured and, eventually raped.

The detectives realized that the young men, who’ve orchestrated all of this, having spent so many hours playing KOBS (Kill or Be Slaughtered – the fictional shoot ‘em up game created by the SVU writers), think they’re just playing a game, ‘leveling’ up with each progressively violent act against Raina.

In the end, the perpetrators are caught in a shoot-out that uses camera angles that make the whole sequence appear very video game-esque (great direction there Jean de Segonzac). Raina is rescued, but the entire ordeal has proven to be too much for her, she realizes that she was in over her head from the beginning, that she wasn’t going to be able to change attitudes all by herself and that she’d paid too high a price in trying to do so. She announces that she’s getting out of the gaming industry.

While the real-life GamerGate has settled down, Raina’s statement about leaving the business very realistically shows that while women have made strides in predominantly male fields, the progress is slow and not without some personal cost for any woman who takes on the task.

Once again, SVU has taken a controversial topic and shown that in its current state there is no clear winner, only, especially in this arena, extreme losers. Will continued discussion about this subject matter help to change attitudes going forward? It seems that it already has, but it doesn’t hurt to keep revisiting the issue to check in on the level of that progress.

Finally, let’s remember that SVU began in 1999, long before the rise of the internet, the proliferation laptops, smartphones and streaming TV (a method by which millions of people now watch the show). As each bit of new technology comes along, sadly, so does some sort of criminal usage of that element. In mining these real situations, SVU accurately reflects our fears, fascinations and, in many cases, frustrations with the fact that the law hasn’t quite caught up to many of the immoral, unethical and illicit actions that take place because of the advances in the availability of information and the simplicity with which it is to hide behind an easily accessible cloak of anonymity. If these fictional detectives weren’t available to investigate these cases and let the public know via a medium absorbed by millions about these things of crimes, just who would do it? No one could have know 16 years ago when the show debuted about the types of cyber crimes that would be discovered and proliferated upon the public. Thank goodness there’s the SVU squad to sort it all out for everyone. (and thank goodness there will be a season 17 to continue that tradition, right?!)

No discussion of this episode would be complete mentioned a few things that went down among the staff of the 16th precinct during this installment, right? First, how about that Fin? While it wasn’t much of a look into his personal life, it’s very cool that the man owns that he likes, and spends a lot of his time off playing, video games. It was awkward and a bit funny at the same time watching him translate ‘gamer talk’ for Olivia throughout the episode. And, it surely wasn’t coincidence that it was he who gunned down the bad guy at the end in the game-inspired ‘Kill or Be Slaughtered’ shoot-out at the end. (And thank you for not subjecting Fin, or the rest of us, to another IAB investigation into this matter.)

While Fin was the gamer in this situation, Carisi also really stood out in this episode. That guy’s really coming along, isn’t he? He’s proving his worth time after time and it seems the others are really taking notice, as is the audience. While Rollins and Amaro can’t really be classified as veterans in the department, it’s still nice to have some fresh blood mixing it up. He’s still excited and doesn’t seem jaded about the job at all – yet. It will be exciting to see how Carisi changes as he spends more time in the unit. (Having said that, please don’t do anything drastic like kill him at the end of the season for dramatic effect. Yes, it would be dramatic, but also extremely unwelcome!)

The only real draw back to this episode was that Amaro was nowhere to be seen. Let’s just assume that he was in court on a case for a few days. Lately, it seems so rare that all of the players are together that it’s become a real treat when they are. But, having said that, when everyone is working a case together, there are more angles to service and sometimes in incorporating all of those characters, the smaller moments can’t be lost, like Fin and Rollins eating together in the squad room and Rollins referencing their ‘dinner table.’ It was just a little thing but it reminds all of a  connection they share that goes beyond just their work.

Speaking of life beyond work, how about the return of Dr. Lindstrom and Liv’s admission to him that despite her fears about raising the boy, she’s started the paperwork to adopt Baby Noah? That’s a pretty big statement to make at the top of an episode and then let go. But was it let go? While Sergeant Benson didn’t really have any interaction with the Gamer Boys, she did have a sort of motherly chat with Fin at the end. That’s not to say that she was necessarily the older, wiser one in that conversation, it’s to say that she’s not only embracing her role as a leader in the precinct but she’s using knowledge gained from that position and from her interaction with her colleagues to try to be a better parent; a certain goal for all parents.

But, having those scenes contained in this episode was certainly not only to boost the narrative of this immediate storyline, but as we all know, no scene on SVU is included without the knowledge that those moments are setting up something that will no doubt will come into play later on. That being said, Liv’s announcement about her desire to make Noah a permanent part of her life could face problems as early as next week when Olivia ventures out of the squadroom and into an undercover assignment.

Hopefully, none of this will end with someone shouting another SVU staple, “10-13! Officer down!” 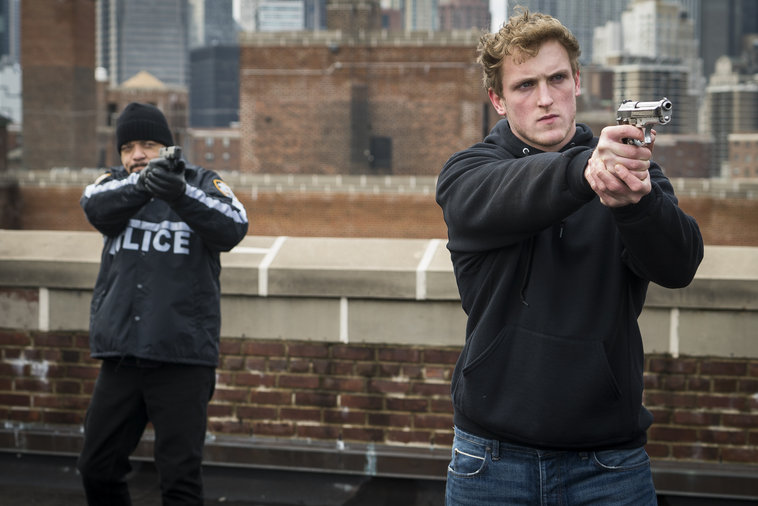