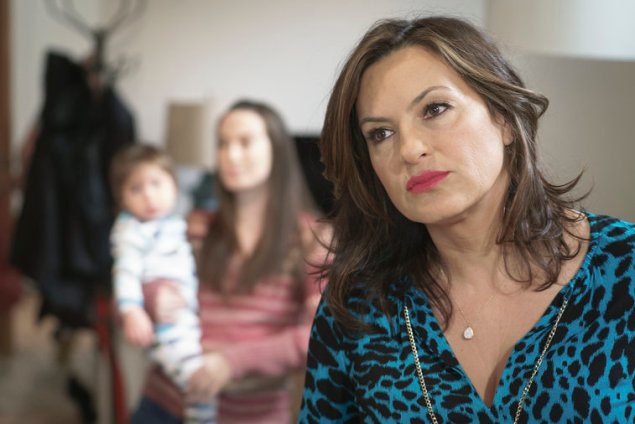 Alrighty, let’s get right into the requisite recap of this SVU episode so we can really break down everything that transpired and what it all means.

It begins with the team staking out a brothel waiting for the delivery of some sex trafficked girls. When the girls are brought to the location, the team storms in and sweeps up a pimp, a Madame named Martha and some underage girls. Back in the squad room Martha claims that she’s not really a Madame, that she’s actually working undercover trying desperately to find her daughter, Ariel, who was kidnapped three years ago.

To her credit, Martha has made amazing strides in infiltrating the ring but her involvement borders on criminal activity since she actually purchased girls, although she claims it was for the purpose of sending them home. When Barba puts the kibosh on her going back undercover, the crew works to find a way into the next big party, a Super Bowl bash.

After some more surveillance, some deals with the players involved, Benson, Fin and Carisi manage to establish themselves on the inside; Benson as a Madame, Fin as a pimp and Carisi as a high paying customer.  Things are going swimmingly until the big boss, a dude named Bishop, unexpectedly rolls up and storms the party.

Several tense moments follow as everyone freaks about Bishop showing up but when he steps in the room, low and behold, it’s our old friend, and former leader of the squad, Lieutenant Declan Murphy, obviously working undercover. Quickly showing no favoritism in order to maintain his cover, Murphy pistol-whips Carisi and then pulls a gun on Fin. In a flash, Benson pulls her gun on Bishop/Murphy.

After a few minutes of this tense standoff, Amaro and Rollins and a bunch of unis burst in and arrest everyone, including Benson, Fin, Carisi and Murphy so as to keep up the undercover charade.

Back in interrogation, Fin and Rollins get a pimp who was scooped up in the raid to give up the name and location of the guy who’s holding young Ariel.

Charging into an abandoned warehouse, the team finds several girls chained up, one of whom is Ariel, but the girl is grabbed by the pimp, Johnny Drake (a.k.a. Johnny D.) As he holds a piece of glass to Ariel’s throat, he uses her as a shield to keep the cops at bay. It’s Benson who talks Johnny D. into giving up and as he shoves Ariel away, the girl rushes into Benson’s arms.

Later, at the hospital, Martha and Ariel share a tearful reunion.

The case behind her for now, Olivia is cuddling baby Noah when the doorbell rings and she’s a bit stunned to see office buddy Medical Examiner Melinda Warner paying a visit. But unfortunately Melinda’s hasn’t stopped by for a friendly chat but rather to drop the bomb that through DNA she’s determined that Johnny D. is Noah’s biological father.

So, how about that Murphy showing up?!? Warren Leight told me about that surprise just the day before the episode was to air and I have to say I was so happy for fans to have the revelation. It’s very cool that it didn’t leak out….until the opening credits! Dang!  How great would that have been for him to just show up absolutely, totally, unannounced?

Remember when he first appeared on SVU in Gambler’s Fallacy and how by the end of that episode Twitter was a buzz with a massive number of tweets proposing that Declan Murphy be the star of an SVU spin-off? C’mon you remember. Show of hands who tweeted that (raising my hand…)

The look on Benson’s face when she first realized that it was Murphy was priceless, as were the reactions of Rollins and Amaro as they initially caught sight of him. In true Murphy fashion, he wavered between being pissed at the squad for nearly screwing up his operation and feeling sentimental toward his former co-workers as he once again witnessed their commitment to the job. The interaction between he and Rollins, given their history, was equal parts awkward and endearing, as it should certainly be.

Discussing Donal Logue’s return to SVU, Executive Producer Warren Leight had this to say, “We were so thrilled that we could do this and we’re very grateful to Fox for letting him take some time out from starring on Gotham to come back to us. Everyone was so happy to work with him again. He’s just in a few scenes in this episode, but he’s full-on Declan in those for sure.”

But sadly, Murphy, still undercover had to leave once again and saying goodbye to him and Logue wasn’t easy, admits Leight. “It was a bit heartbreaking for all of us.”

Well, thankfully Benson didn’t have to shoot Murphy so there is always the possibility that he could return. While we certainly wish Logue much success on Gotham, it would be nice to have him back every once in a while.

Speaking of popping up again, how about the reappearance of Selena and Pilar?

We first met Pilar in season 14’s Acceptable Loss and Selena in this year’s opener Girls Disappeared. In both instances, the team worked to free the women from the respective sex rings they were working in, and yet both apparently ended up right back in the trade. While this is upsetting, it’s something that all too often really does happen. Kudos to the SVU writers for adding yet another touch of realism to the series.

Big ups also go to guest star Lilly Taylor for making Martha seem both incredibly sincere in her search for her daughter and a bit obsessed as well. But in the context of parenthood, this isn’t an unrealistic combination. For fans of Taylors, didn’t you just for a second think, ‘Hey, this is Jojo from Mystic Pizza all grown up and this is her daughter!’ And who was Jojo’s husband in that film? That’s right; none other than Criminal Intent star Vincent D’Onofrio! Ok, it’s a stretch, but just a fun tidbit there.

And now we must talk about that last big bombshell – that Johnny D. is Noah’s father. Just was we all suspected, Olivia’s announcement to Dr. Lindstrom in last week’s episode that she’d started the process to adopt Noah wasn’t just a random, orphan statement. But, just how far into that process is Olivia? By her remark to Melinda that ‘it’s a pile of paperwork,’ the assumption is, not that far and the sad fact is that since the adoption hasn’t been finalized the discovery of Noah’s father could seriously jeopardize Olivia’s chances at making her relationship with Noah permanent.

About this Leight says, “That’s something that we’ll be visiting that until the end of the year. As Olivia is facing all the travails of being a single mom, which is quite enough, then there’s this twist thrown in – oh, and by the way, we found the baby’s father. In some ways Olivia knows that she’d be better off keeping this information about Johnny D. to herself, but that would entail lying on the adoption papers and as we’ve seen in the past, lying hasn’t always, or ever really, worked out for her. It’s not part of her character. This is just a big reminder that when you’re pursuing something that you really want, no part of it is ever effortless.”

(Cue the reappearance of Trevor Langan!)

At present, eight episodes remain in the sixteenth season of SVU and with the recent announcement of a renewal, fans can relax just a bit knowing that there will be a  season seventeen to enjoy (or stew over – take your pick here.)

“After all these years of sweating these things out and having the anxiety of that waiting game where we’re not sure what’s going to happen until May, we’re very grateful that the fans kept showing up this year and that the network gave us the dignity of an early pick up,” admits Leight. “To get that notice this far in advance helps us plan next year and we can begin to think about what directions we might want to go and reach out to actors that we might want to work with now before they’re booked with other things.  It also frees us up creatively in different ways, and it’s really nice to know that you’re writing the season ender and not the possible series ender.”

As for what that season ender will be, Leight did offer a few hints about that. Here’s what he said……

As is so oft uttered in the television world — stay tuned! 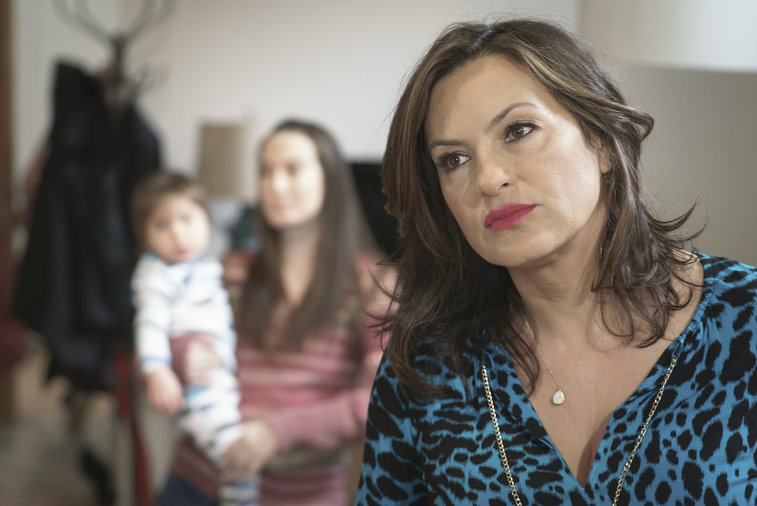