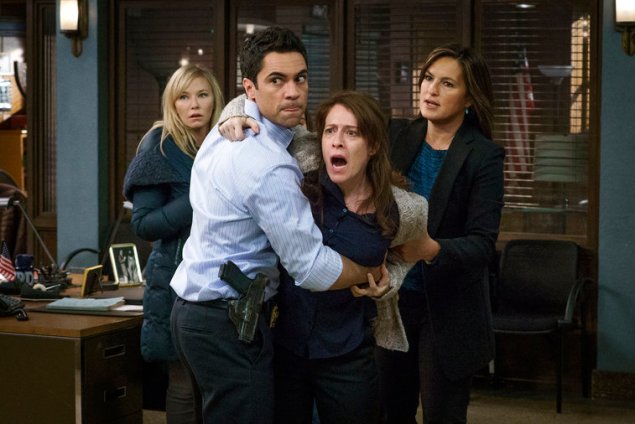 Sometimes, it’s the shortest sentences that say the most:

What they’re both really saying is that nothing went well, for anyone, which is so often the case on SVU that we’ve come to expect it.

Because of that expectation, it’s imperative that the narrative told be so well crafted that viewers don’t just write the whole thing off as yet another crime story with despicable people doing incomprehensible things to other people. There has to be some emotional substance, whether good or bad, behind every person’s actions so that all of it’s believable, even for the most jaded SVU fan.

On the street, as they prepare to go their separate ways, the duo encounter a young woman screaming and hitting a man she claims raped her in the bathroom at a pizzeria.

Pretty Caucasian Jenna has just accused Jerome, a young black man, of assaulting her. What makes this seem so plausible to everyone involved is that Jerome was suspect in a gang rape case as part of the Prospect Park Three. During that highly publicized case all three men accused of a gang rape in Brooklyn confessed to the crime but then recanted, claiming their confessions were coerced. Coupled with some DNA contamination in the case as well, and the result is a currently open multi-million dollar lawsuit filed by the PP3 against the NYPD.

While Carisi, Amaro and Fin stew over that case and Jerome’s involvement then and now, Benson and Rollins, at the hospital to talk to Jenna, meet her mother and father as well as her uncle, a dentist, who had seen Jenna just before the incident.

Right away, savvy viewers know that Uncle Dentist is somehow involved in this, but no matter as this is where that well-crafted narrative part comes into play as we may think we know where this is going, but clearly we don’t.

Thankfully, Uncle Dentist isn’t in the room as Jenna recounts what she believes happened to her, although she’s sketchy on the particulars of the incident, her father simmers with anger as she discloses the details.

Back in the squad room, Barba strolls in and spews some rhetoric about what should happen next with Jerome and it all makes sense, as Barba always does, but the real question raised in this scene is – why is Barba wearing a tuxedo?!!? That guy’s private life sure must be exciting – on a yacht on the weekend, sporting a tuxedo on a work night….

Anyway, when Jenna’s pop finds out that Jerome is part of the PP3, he says, ‘so he’s a thug rapist who got off on a technicality?’ and in that moment you just know that he’s not going to be happy that the guy isn’t being thrown right in jail right that very second.

Cut to Benson getting a phone call in which one of her responses is, “Where?’ and we all know what it means when a detective asks that question – there’s a new crime scene.

At this one, Jenna’s father, Luke, appears to have murdered Jerome with a nail gun. Luke insists that he was only trying to get a confession out of Jerome and that Jerome collapsed under the stress.

In court, as Luke is arraigned and given an impossibly high bail amount, Jerome’s mother shouts that NYPD framed her son and that Jenna is lying.

Just after the hearing, footage from inside the pizzeria shows that Jerome did not assault Jenna, that he was, in fact, trying to help her.

When Jenna goes to see her father in prison, she makes a statement to him that alludes to the fact that she knows it wasn’t Jerome who raped her but that she’ll stick to that story if it helps her father.

Armed with a recording of Jenna’s discussion with her father, Rollins and Amaro (together again, yay!) gently guide Jenna into figuring out what really happened to her and, yes, just as everyone playing the home game suspected, she reveals that it was Uncle Dentist who raped her, which no one wants to believe because everyone, including some a few of the squad members, think he’s a great guy because he’s a worked with the NYPD and he does tons of charity work.

During a trip to the Dentist’s office, Carisi slyly gets the arrogant doc to give up a DNA sample, which, (yes!) totally matches the semen sample on Jenna’s sweater. (More points for those playing at home who had this on their scorecard.) His explanation? He did the nasty with his wife on the chair before Jenna came to the office. (Ewww!) (And, game players should almost subtract points for this one since it’s so gross…but, ok, five points because you knew he was going to say this, right?)

From there things really speed up, Benson leaks the facts of the case to her old reporter pal Jimmy Mac, and it works as women come forward accusing the doc of raping them. But, unfortunately, because most of the cases are so old, it’s up to Jenna to make her case against him stick.

At a café, while Carisi, Rollins and Fin watch from afar and listen in, Jenna coerces her uncle into admitting that he raped her.

Back in the squad room as Carisi fingerprints Uncle Dentist, he takes great pride in nearly crushing the man’s fingers as he says, ‘this is for what you did to Jenna.’

In a very compelling final scene, Barba sits across from Jerome’s mother and explains that Luke didn’t intend to kill her son, going so far as to perform CPR on the man who in fact died of a heart attack. Barba tries to convince her that Luke was only seeking justice for his daughter, just as she’s now seeking justice for her son, and that if he takes this case to trial a jury might acquit Luke. He tells her that Luke will take a plea and do time. She isn’t satisfied with this outcome, but Barba simply says, ‘this is where we are’ and we end on her grief-stricken, tear-stained face.

Analyzing this episode, yes, it’s loosely based on the Cosby case — perpetrator is someone who is seemingly well-liked and well-respected and no one want to believe that he’s committed these crimes. Because of his statue in the community, victims feel alone and are reluctant to admit that this man assaulted them. The most disturbing parallel here is that like the Cosby case, it took accusations by several women to make people believe that it could all be absolutely true and to take all of it  seriously. Which begs the question, why was one woman’s accusation not enough? This isn’t a question that can simply be answered right now, but one that hopefully continues to be asked over and over again until it’s no longer needed to be asked.

In this episode in particular, add this Cosby-esque inference to the fact that this is a dentist drugging his patients, a crime of opportunity, and the portrayal of the Prospect Park Three, which is a riff on the real life case of the Central Park Five, and once again you have a good old fashioned twisty tale that incorporates real life cases into a compelling tale of crime and punishment, with an exploration of what real justice means and the sad realization that so often it doesn’t mean exactly what it should.

Now that the analyzing part of our time together is over, let’s give some shout outs where due.

It was extremely pleasing to see the whole squad back together and while we (rather sickeningly, in a way) enjoy the episodes that feature personal drama for the squad members, it’s oh so nice to see all of the featured players concentrating on some serious police work, rather than mired in personal problems. The really shine when not under the threat of a superior or someone from IAB.

Also, there’s was a lovely continuity moment when Benson mentions that she’s still in touch with reporter Jimmy Mac, which is a callback to Alec Baldwin’s guest character from last season. And, it’s an interesting statement as during that episode it was sort of assumed at the end that Jimmy Mac was set to retire and get out of the newspaper biz. So….he’s still around. Way to keep that door open. But, one thing that’s just a bit irksome about bringing up Jimmy — why you always gotta bag on reporters? We aren’t all bad, you know. Maybe we could see an episode that defies that stereotype. Just a thought.

Carisis certainly exposed some new layers in this episode – the way he finessed Uncle Dentist into giving up the DNA sample, how he talked Jenna’s father into understanding how he should handle his emotions toward his daughter, and finally showing that he isn’t always Mr. Swanky Nice Guy as he twisted Uncle Dentist’s fingers until the man cried out in pain. All interesting stuff to know about New Guy, who may not like that title and fortunately for him, with personal reveals like these, he seems to be on his way to shedding that moniker. He’s certainly proving himself and quite neatly actually turning into that empathetic detective that Benson and wanted in the first place. There is a method to his slick dude madness and it’s certainly fun and intriguing to watch.

Also, in a very pleasant break with tradition, it was incredibly powerful to end the episode not on someone from the team, as is almost exclusively always the case on SVU, but rather to close out this piece on Jerome’s mother, as she expresses her dismay with the whole system in frustrated silence. Sometimes it seems tiresome to end on a shot of an SVU member if it’s just for the sake of getting one last shot with our heroes front and center. Occasionally, this method doesn’t carry any emotional impact but rather seems just to be a network mandate as a way to finish an episode (and maybe it has been until this point.) Hopefully, after seeing how powerful this was, maybe we’ll see endings that display deeper emotion, whether they feature the show’s regular players or someone in the guest cast.

Finally, here’s a thought, as nothing said on SVU (especially in the Warren Leight/Julie Martin era) is ever uttered without purpose; in an early scene of this episode, Benson remarks that Uncle Dentist worked with NYPD on the Ellie Porter case and later we learn that if he’s convicted, all of the cases Dr. Neil Alexander (Uncle Dentist’s real name) worked on could come back into question. Hhmmm….could this be setting up some trouble for Benson and Ellie’s son, Baby Noah, now in Benson’s custody? Knowing the regime mentioned at the start of this paragraph, it seems likely.

Here’s a short sentence about that: “This can’t be good.” 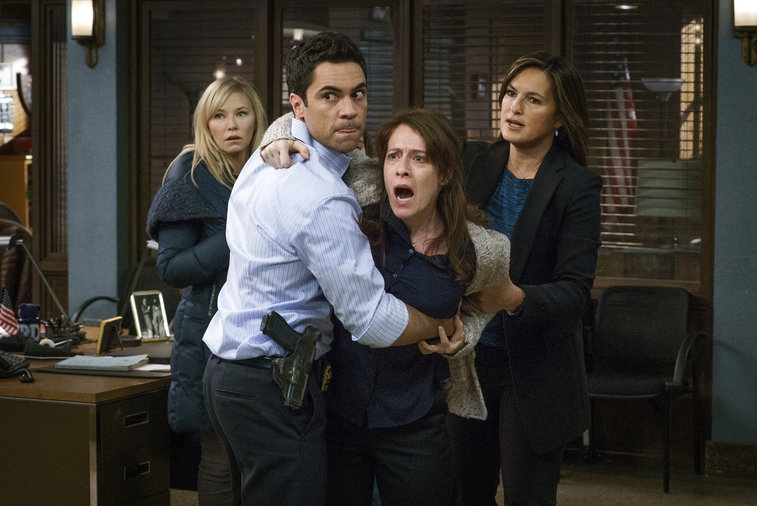