A group of Staten Islanders today argued in federal court that Gov. Andrew Cuomo must immediately allow a special election to replace former GOP Congressman Michael Grimm—claiming that Mr. Cuomo has failed to provide any valid reason for postponing such a vote.

Attorney Ronald Castorina contended that the Democratic governor, by not formally declaring Mr. Grimm’s Staten Island and Brooklyn-based seat vacant—which would automatically trigger a special election in 70 to 80 days—has deprived some 750,000 New Yorkers of their rightful voice in Congress. Mr. Castorina argued that if the court does not force Mr. Cuomo to declare the vacancy, it would grant him almost unlimited control over the special election process for federal offices.

“If this court does not issue an injunction immediately, the governor in essence has the ability to hold the ball until the time clock runs out. The governor has the power to disenfranchise three quarters of a million people,” said Mr. Castorina, who is a Republican Board of Elections commissioner, in Brooklyn.

The central argument of Mr. Castorina’s case rests on the opinion of Judge David Larimer in the 2011 Fox v. Paterson case, in which citizens sought to force then-Gov. David Paterson to call a special election for the Buffalo-area seat of former Congressman Christopher Lee, who had resigned after posting partially nude photos of himself on the Internet. Mr. Larimer permitted Mr. Paterson to postpone the special election until the date of the next November general election because the governor argued the state needed time to bring voting machines in the area up to federal standards.

Mr. Castorina asserted that, in so doing, Mr. Larimer created a precedent whereby governors must advance “a compelling state interest” as reason for waiting to declare a vacancy. The papers Mr. Cuomo’s legal team submitted in the case only stated that the governor was “actively considering” unspecified “factors” in determining when to call the special election

“They’re telling the court ‘hey, judge we’re considering a lot of stuff. We’re not going to tell you what that stuff is, but lay off,'” said Mr. Castorina.

Eastern District Court Judge Jack Weinstein called Mr. Castorina’s argument “compelling.” But he wondered if he had the power to force a governor on an electoral matter.

“We do not order governors in this peremptory way that you are suggesting to do things a certain way,” Mr. Weinstein said.

However, he posed questions to Mr. Cuomo’s counsel, John Schwartz, who argued that the law imposes no time frame whatsoever on when a governor must recognize a vacancy.

“There’s nothing in the constitution or in any statute or in any case that requires any time for the governor to make any proclamation,” said Mr. Schwartz.

The federal jurist speculated that, by that argument, the governor had the right to delay a special election to give an ally a political advantage.

“If he chose to delay it for purely political reasons, it might not be appropriate, but it wouldn’t be a violation of the statute?” Mr. Weinstein asked.

Many suspect the governor will try put the vote on Mr. Grimm’s replacement off until this year’s November general election as a cost-saving measure. Mr. Cuomo has postponed special elections for state offices, citing expense as a concern.

Mr. Castorina, however, argued that past suits have determined that cost is not a legitimate excuse.

“Courts have held that money is not an issue of a compelling concern when it comes to voters’ right to express themselves, on an individual’s right to run for office,” he said.

Mr. Schwartz suggested that the five weeks since Mr. Grimm stepped down after pleading guilty to a federal tax evasion charge have been insufficient time for Mr. Cuomo to determine when to call a special election.

“There are many factors and they change all the time,” he said. “It is a very short time for the governor’s office to get the information it needs, talk to the people it needs to talk to, decide on the things it needs to decide on.”

Mr. Weinstein did not render any decision today, and has yet to set a date for the next hearing.

Republican Assemblyman Joseph Borelli has proposed a bill that would set hard deadlines for the governor to allow special elections. In New York City, the mayor must set up a special election within three days of a city official dying or stepping down.

Staten Island’s Republican District Attorney Daniel Donovan is considered the front-runner to replace Mr. Grimm. The local Democratic Party has yet to decide upon a candidate. 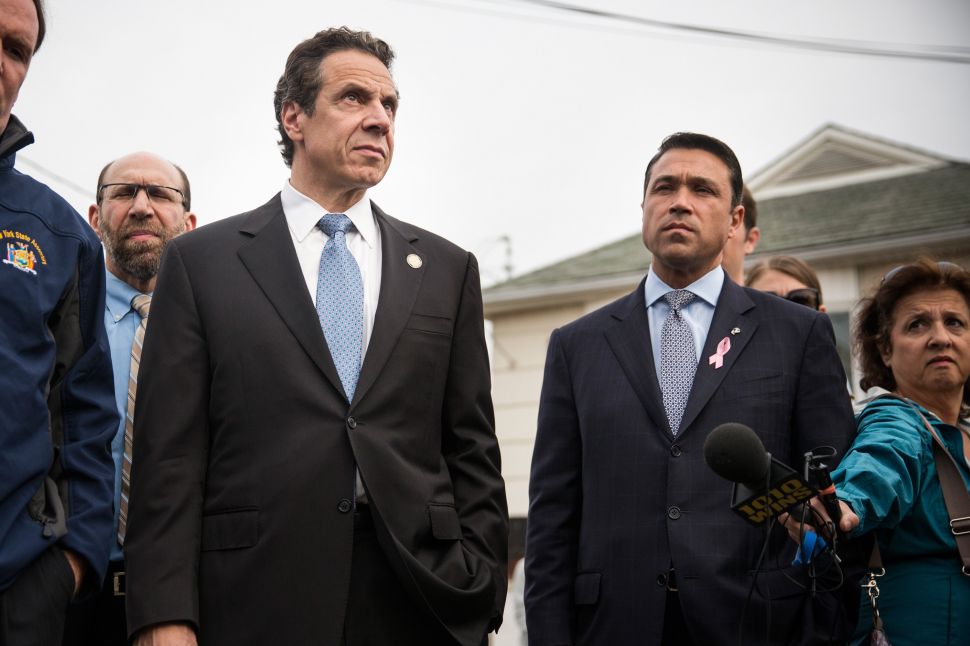