On a recent wintry night, each seat at Cafe Clover in the West Village was filled with a good-looking person who looked good eating. It was the eve of Fashion Week and the sylphs and epicenes supped. In their soft cowl-neck sweaters and deep winter tans, they managed to consume the food before them simply by Instagramming it. I didn’t see one full mouth the entire time I was there.

Decorum and conscious consumption no doubt played a role but alas, one reason might also have been the food itself. The menu, created by former Market Table chef David Standridge in consultation with Dr. Mike Roussell, director of nutrition at Peak Performance, isn’t terrible but it’s not very appealing either. Certainly not anything to scarf.

Cafe Clover proudly and overtly presents itself as healthy and the menu reads like the dietary habits of a gourmet woodland creature. Some may get swoony over chia seeds, quiver for quinoa and go loco for coconut oil, but unless these and other edifying superfoods are incorporated into a super food, these for me remain remanded to health food emporia. Eating a full menu of the stuff is like Fifty Shades of Green, minus the titillation.

Happily, Mr. Standridge’s efforts do not fall completely flat. Among the dishes that do zing is a chia, flax and sunflower seed cracker, which arrives in place of bread service, like a slab of black terrazzo flooring. I think black-capped chickadees live on a similar cracker but these fit-for-human-consumption ones one-upped them. They come with something called butternut squash hummus, which seems a lot like simply butternut squash puree. I’m not complaining about the nomenclature, of course, especially after realizing belatedly tahini was present, or contemporaneously how buttery butternut squash can be. The latter scooped onto the former—chippy in texture, inky in color and nutty in mouth—represented the peak of the dinner. But since it was but the overture, that’s bad news bears for the rest of the symphony.

Mr. Standridge has mentioned in his numerous media utterances—the restaurant is run by the very media-savvy duo David Rabin and Kyle Hotchkiss Carone—that his interest lies in substitution of healthy for non, coconut for olive oil, lentils for rice, cauliflower for cow. It’s the Jessica Seinfeld school of veggie consumption for grown ups.

That is laudable, but the success of this sort of culinary prestidigitation relies on the prestige: Flavor. In precious few instances does Clover produce. Apart from the chip, a rutabaga and celery root salad was the only thing that rose from mentionable to memorable. Thin strands of the vegetables, tossed in a bright citronette touched with cumin and speckled with pistachios, make for a novel take on al dente pasta. This pasta-not-pasta is apparently a thing to do now (see also: Kappo Masa’s surimi), but at Clover, the crispness of texture and tartness of flavor puts angel hair to shame.

The rest of what’s on offer falls into that unhappy valley of neither being redeemed by godawfulness nor ennobled by inherent virtue. It is, in a word, O.K. A kale, blood orange and watermelon radish salad, O.K. Not baddish a gem lettuce salad but also not great either. The chia seeds thrown over it made little sense, in terms of flavor or texture. Not cruddy the market crudité either, but it wilts when compared with what’s offered at Santina, where the sauce is a delectable pesto and the whole thing has a theatrical flair to boot. But at Clover, though one is offered a trio of sauces, they are stingy in portion and flavor. A tiny ramekin of Green Goddess is pretty to look at but so flavorless to turn atheist a true believer. The best of the three, a burnt vinegar, is toothsome but not suited to the relatively non-porous nature of the veggies.

The problem of the crudité is the problem of Clover. In a crudité, the vegetable wedge must be both method of deliverance and the message inside. Clover is clearly a restaurant with a message: Healthy can be delicious. Though it gets the first part right—yes, it is healthy—Mr. Standridge fails to provide the sugar to help the medicine go down. Example: Cauliflower steak. Initial thought: Yippee. One of the vegetarian options on the menu, what better candidate than the cauliflower steak to prove the non-sentient can be good for you and taste good to you, too? But the “steak” was a sodden sinister slab. Supposedly it was grilled but I got none of the crispness out of it. I’ve had much better cauliflower steaks at Bowery Meat Co., where the thing came with outer char, Marcona almonds and raisins. Cauliflower is like a drunk: It needs help to stand.

A quinoa tagliatelle, made from a whole-wheat flour and cooked quinoa dough, could have been a persuasive argument for the use of quinoa in pasta dough. In the event, however, any subtle nuttiness was drowned out by a horde of mushroom flavor. Hey, I ain’t knocking the maitake. Smoke ‘em if you got ‘em. But all—beet greens, sunflower kernels, pasta—was washed away in that intense earthy flavor. There wasn’t any counterpoint of flavor or texture.

The desserts are the reason to go. When I was last there, there was an off-menu pineapple upside down cake that tasted deeply unhealthy in the best way possible: Gooey and indulgent, satisfying and sweet. There’s also a neat little box of chocolate from Cacao Prieto. It’s handsome enough to draw attention from nearby tables. But ultimately, for a place with a point of view like Cafe Clover’s to work it must excel in one of three things: Service, scene or food. As it stands now, the scene is charmant, the service, well, serviceable, and the food not disastrous.

But it’ll take a lot more thought, flavor and genius to turn Cafe Clover from a place to try once because you ought to into someplace you wanna go. 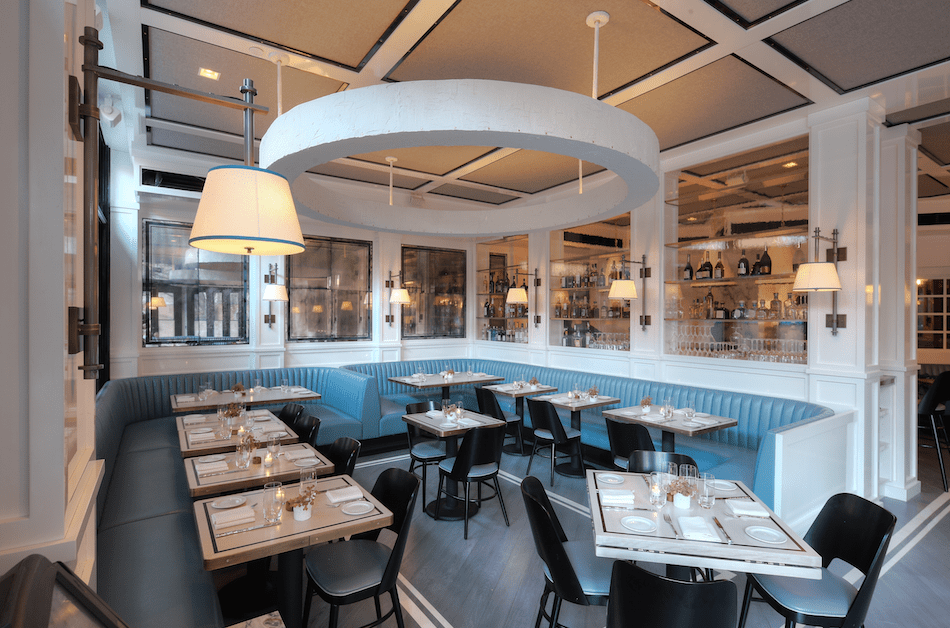