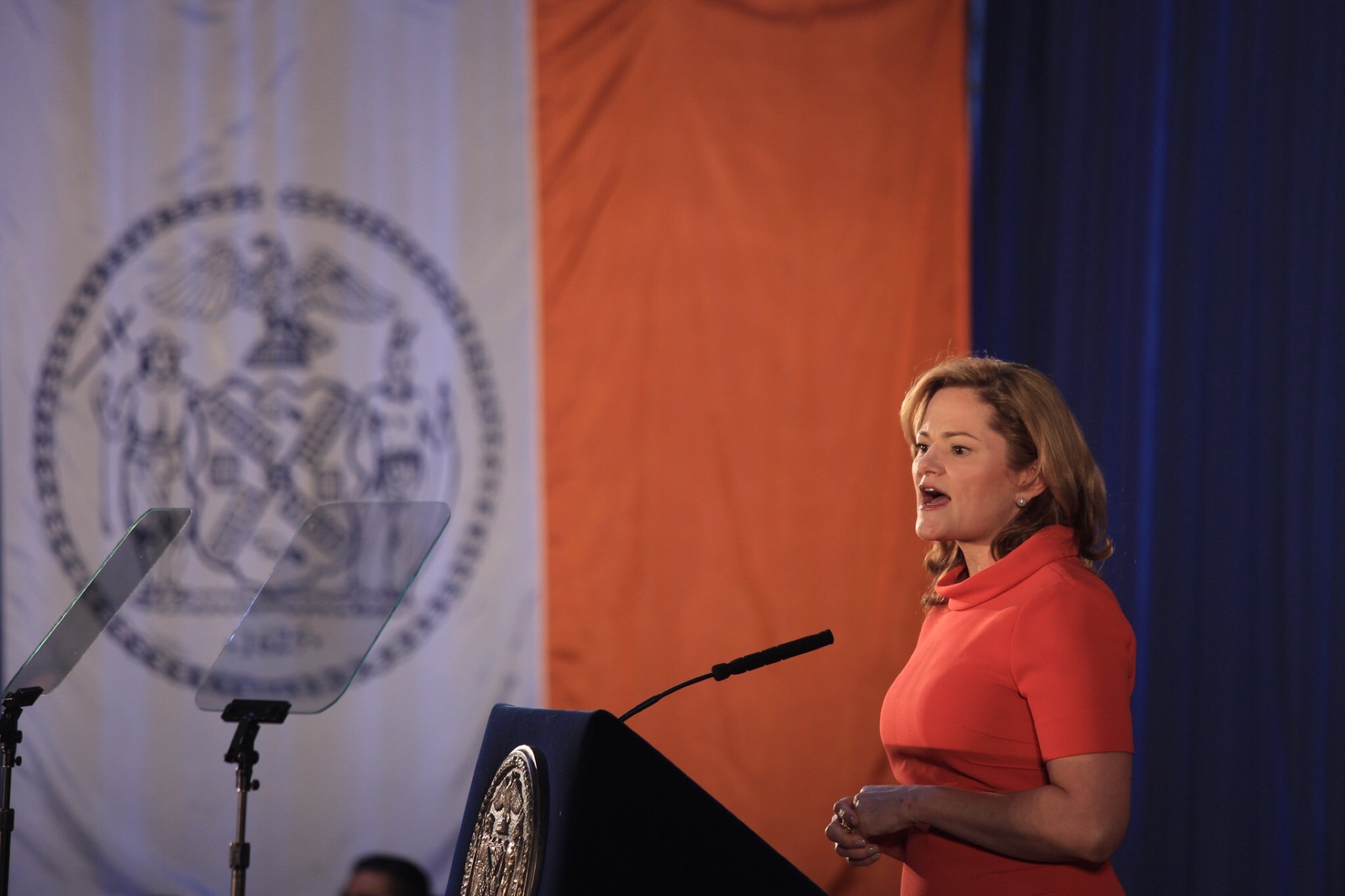 Council Speaker Melissa Mark-Viverito wants to expand the city’s government to help New Yorkers get access to civil lawyers and to enforce and to help them navigate labor laws—proposing two new city offices in a broad State of the City address today.

The two proposals—to create a Civil Justice Coordinator and an Office of Labor—were just two of the expansive ideas trumpeted by Ms. Mark-Viverito in her first State of the City address since taking lead of the City Council over a year ago.

“Together we’re going to empower, we’re going to uplift and we’re going to make sure all New Yorkers are heard,” Ms. Mark-Viverito said at the beginning of her speech. “We will tackle systemic issues in human rights, workers’ rights and civil justice. We will take on long-standing challenges in public housing, small business, criminal justice education—and we will do it together.”

It remains to be seen how the other side of City Hall will respond to Ms. Mark-Viverito’s ambitious goals. The speaker and Mayor Bill de Blasio have been allies over the last year, though he has sometimes shunned her proposals for the city’s budget—including her request last year to add 1,000 new police officers to the NYPD’s ranks.

Ms. Mark-Viverito framed both proposals for the new government offices as ways to battle inequality in the city. Her proposal for a new Civil Justice Coordinator would essentially work toward affording New Yorkers a new right—a right to a lawyer in certain civil cases, something guaranteed today only in criminal cases.

“Justice should not be reserved for only those who can afford it. To do this, we are going to create an Office of the Civil Justice Coordinator. Their job will be simple: work to ensure legal representation is available to all,” Ms. Mark-Viverito said. “This will be the People’s Law Firm: El Bufete del Pueblo.”

Ms. Mark-Viverito’s office did not immediately have figures on how much such a new office would cost. But City Council members Mark Levine and Vanessa Gibson have previously introduced legislation that would afford every New Yorker a lawyer in housing court—where less affluent New Yorkers are often up against better-heeled landlords—that the Independent Budget Office has estimated would cost $100 million.

Mr. Levine said he would be introducing the legislation to create the new office.

“It’s a critically improtant step. This office will touch on also immigration, family court and other issues, but I think the bulk of the focus is going to be on housing, just because that’s where I think the biggest numbers are,” Mr. Levine said.

In the way the city’s criminal justice coordinator works to set and develop policy, so would the civil justice coordinator—and Mr. Levine said his goal would be scaling up to a universal right to counsel in cases that could be potentially life-altering, such as eviction, custody matters, and deportation hearings.

“There are many, many policy implementation questions that have to be answered and to have a full time team on that focused on that will be incredible helpful,” he said.

Mr. Levine allowed that the mayor might have some “sticker shock” at the price tag—but said the IBO’s estimate for providing civil lawyers for housing matters was conservative. He argued over time the legal representation would essentially pay for itself, saving the city from money it spends when people are evicted and become ill or homeless.

Ms. Mark-Viverito has previously expanded funding for lawyers in non-criminal cases. She boosted the city budget to include more money to connect unaccompanied minor children facing immigration cases with lawyers to argue on their behalf in court during an immigration surge docket.

The new office would make budget recommendations, coordinate existing legal service providers, and develop a system to get people help after disasters. The new office would also be responsible for a five-year plan to ensure New Yorkers get access to legal help.

She argued it’d save the city money in the long run: “A recent study found that for every one dollar invested in these services, we save six,” she said.

And it can change lives. She cited the example of a woman named Shaun Little from Queens, who survived Hurricane Sandy only to bounce around from a mass shelter to a hotel. The city threatened to stop housing her and 488 other families—but the Legal Aid Society, one of the city’s largest legal services organization, stepped in and found her temporary housing, and eventually a permanent home on Staten Island.

“With their help, she was able to stay in her temporary housing – and then find a home of her very own on Staten Island,” Ms. Mark-Viverito said. “But without an advocate, there is a good chance she would have been homeless. These are the voices we’re going to empower.”

On issues of labor, Ms. Mark-Viverito pointed to successes in the city—paid-sick legislation among them—and to the road ahead battling in Albany for local control of the minimum wage. But she said the woes of the city’s working people, who she said often must work multiple jobs or share unsafe housing just to make ends meet, was so big it needed its own city office.

“This is an ambitious plan: so we will pass legislation creating a New York City Office of Labor that is going to help coordinate the efforts,” she said. “The office will study and promote programs on worker protections, education and safety—and it will also enforce City laws like paid sick leave and transit benefits.” 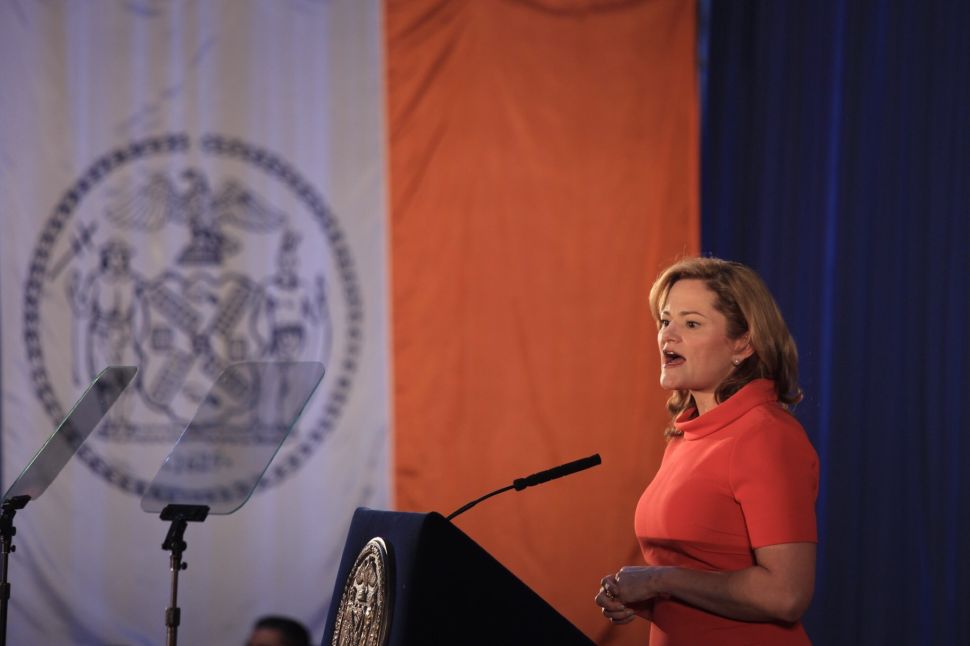