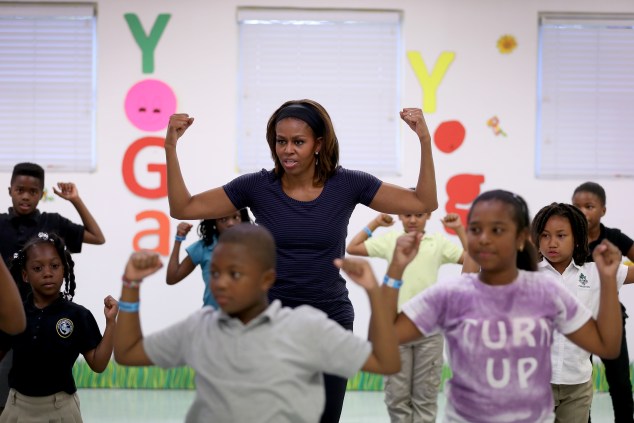 First Lady Michelle Obama marked the fifth anniversary of her anti-child obesity “Let’s Move” campaign with a speech at a Manhattan high school, where she saluted the billion dollar commitment of the nation’s largest health philanthropy to combating the ongoing crisis.

Ms. Obama met with students and faculty and toured the spin class facilities at West Side High School, before taking the stage to address supporters of the Robert Wood Johnson Foundation. The foundation, which organized the event, had just announced it would pledge $500 million to fighting weight problems among American children—on top of the $500 million effort it first undertook in 2007.

Mr. Obama announced that the theme for Let’s Move this year will be “celebration, challenge and champion,” and noted that obesity rates have plateaued in recent years, and even dropped among preschoolers.

“We’ve got a lot to celebrate. Together we have started a national conversation on this issue, and we’re seeing changes on every level, from individual families to schools to the halls of Congress,” she said. “But we’ll also be doing some challenging, because while we’ve come a long way, we still have a long way to go. So we’re going to be pushing folks to dig deeper and do even more for our kids. So we’re focusing on how to truly be a champion on this issue.”

Ms. Obama lavishly praised RWJF for starting the anti-obesity campaign the year before her husband’s election, and said that ‘Let’s Move’ would have been impossible without the foundation’s efforts. She then conjured a vision of a bloated, calorie-inhaling 2007 America, where children stuffed themselves with pizza, tater tots, cookies and sugary juices at school before the whole family gorged on fast food or unhealthy chain restaurant meals for dinner, and where many communities lacked access to fresh produce.

All that has changed now, however, according to Ms. Obama.

“Back then, they never could have imagined that in just eight years, their kids’ school lunches would be filled with fruits and veggies, whole grains, skim milk. That schools across the country would be doing ‘brain breaks’ and other creative efforts to get kids active during the day,” she said. “They never could have imagined that grocery stores would be cropping up in under-served areas, that convenience stores would be selling fresh produce.”

Ms. Obama then argued that obesity saps the productivity of the American workforce while causing healthcare costs to spike. She also took time to blast those who criticized her health improvement efforts, which some complained left public children hungry or forced them to eat less palatable food.

For those reasons, and because obesity is still a disproportionate problem among poor and minority kids, the First Lady asserted she and her allies cannot rest for a second in their fight to get Americans to shed pounds.

“There are plenty of folks just waiting for us to get bored, just waiting for us to declare victory and turn our attention to other matters. We’ve seen this firsthand with our battle to solve school lunches,” she said. “We have seen special interests throw out every resource they have at this issue, and we know that sometimes our kids’ health isn’t exactly their first priority. So we simply cannot afford to complacent one single minute. And that’s what it means, really, to be a champion on this issue. 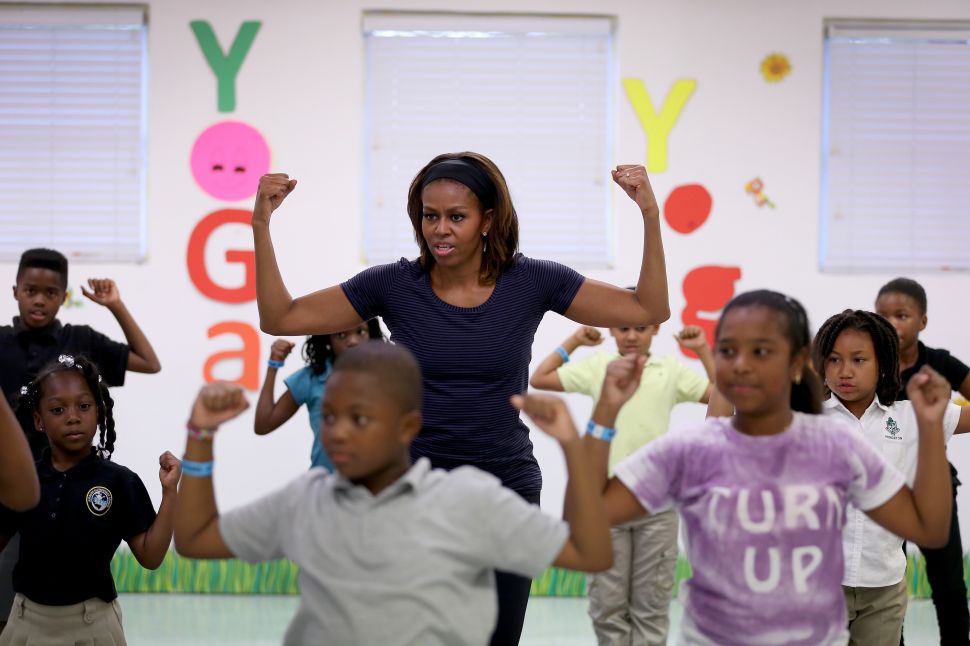